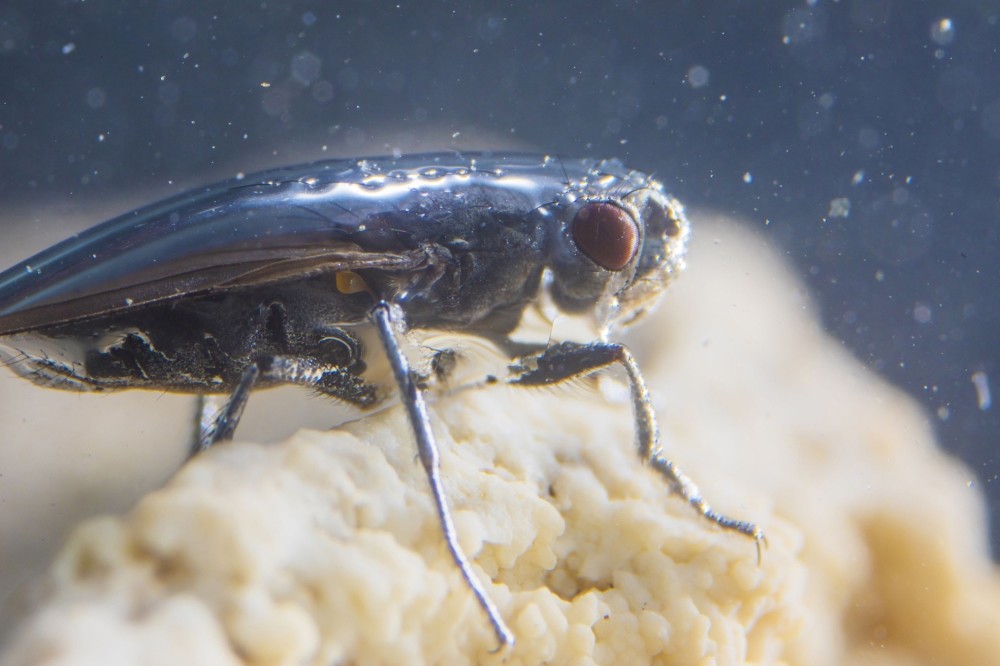 In California's super-salty Mono Lake, a strange kind of fly, once celebrated by novelist Mark Twain, has learned to thrive by building its own bubble and diving beneath the surface to eat and lay eggs.

After decades of study, researchers revealed Monday how the alkali fly -- a crucial part of the Mono Lake ecosystem -- has managed to make the most of nature's gifts and make an otherwise hostile habitat its home.

The diving flies (Ephydra hians) plunge without getting wet in a lake that is three times as salty as the ocean, containing water that feels almost oily because of its very high pH and levels of sodium carbonate and borax.

No fish or any other animals with backbones live in the waters of Mono Lake -- hence, no predators for the flies -- but there are plenty of bacteria upon which the flies can feast undisturbed.

Until, that is, these flies rise to surface and become a popular meal for birds and spiders.

Twain, the celebrated American writer and author of "The Adventures of Huckleberry Finn," is among those who have marveled at the peculiar insects.

"You can hold them under water as long as you please -- they do not mind it -- they are only proud of it," Twain wrote in his 1872 travel memoir, "Roughing It."

"When you let them go, they pop up to the surface as dry as a patent office report, and walk off as unconcernedly as if they had been educated especially with a view to affording instructive entertainment to man in that particular way," he said.

The flies' diving trick is amplifying a skill most insects already have -- the ability to repel water with the help of a thick covering of wax-covered bristly hairs.

This quality is known as being hydrophobic. Bees, for example, can fly through a misty rain because they have hydrophobic wings.

Mono Lake's chemical composition would normally break this defense easily, but the alkali flies "are hairier than the average fly and coat their bodies and hairs with waxes that are particularly effective at repelling the carbonate-rich water," said the report in the Proceedings of the National Academy of Sciences, a peer-reviewed U.S. journal.

The flies also have large foot claws that help them crawl on underwater rocks without being transported away by their buoyant bubble.

Researchers used high-speed video to study the flies, and plunged them into different chemical solutions to see how they would react.

They also compared Mono Lake flies to other kinds of flies, none of which could shield themselves from the alkaline water in the same way.

"It's not that Mono Lake flies have evolved a new and unique way of remaining hydrophobic -- it's that they've amplified the normal tools that most insects use," said co-author Michael Dickinson, of the California Institute of Technology (Caltech).

"It's just a killer gig. There's nothing underwater to eat you and you have all the food you want. You've just got to dive in perhaps the most difficult water in which to stay dry on the planet," he added. "They figured it out, and so get to enjoy an extremely unique life history."

Future research paths may include studying the chemical makeup of the fly's waxes to see if materials could be made to mimic them.

"But there's also some really interesting neurobiology, it is such an incredibly weird thing for a fly to deliberately crawl underwater," Dickinson said.