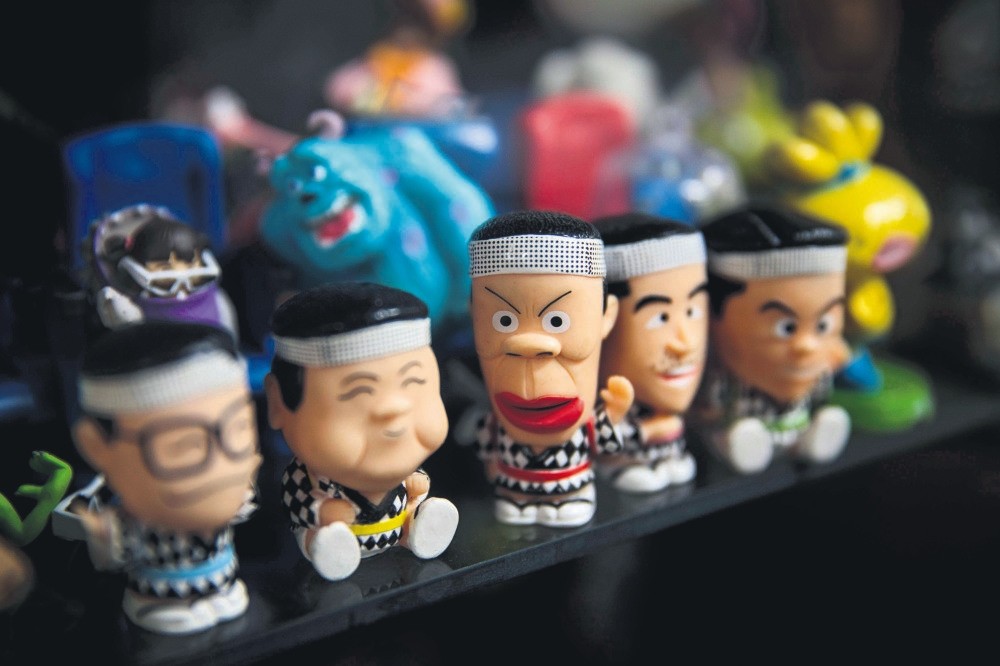 A tiny replica of an ancient Egyptian sarcophagus and a plastic cat squatting on sushi: Just two of the weird-and-wonderful capsule toys that have become a multi-million-dollar craze in cute-obsessed Japan.

The industry is now worth an estimated 30 billion yen ($265 million), with the fastidious attention to detail in the toys appealing to the Japanese sense of precision along with a well-documented love of all things "kawaii" or cute.

One store, in Tokyo's famous Akihabara electronics district, is crammed with around 500 capsule toy vending machines stretching out as far as the eye can see.

"When I see something I want, I keep on turning the crank until I get it," said Shota Makita, a 23-year-old care worker on the hunt for a fun toy.

"There's a sense of excitement about not knowing what I'll get," said Makita, one of a growing number of adult consumers of capsule toys, known as "gachagacha" or "gachapon" in Japanese after the cranking sound.

Store manager Yo Kono says the customer base has changed in the 16 years the shop has been open.

"At the beginning, visitors were mainly male anime fans... but recently the number of customers is growing with more female visitors and foreign tourists," Kono said.

Capsule toys have been around for more than 40 years but the craze really took off in 2012 when Tokyo-based manufacturer Kitan Club launched its "Koppu no Fuchico" ("Fuchico at the edge of a glass") product.

This figurine of a woman wearing a typical office worker's clothes, whose arms or legs were designed to hang over the edge of a glass, became an instant hit with adults.

"We never thought of targeting children. Their numbers are dwindling and adults have more money," said spokesman Seita Shiki.

Shiki chalks up the Fuchico capsule's success to the fact it is "cheap and Instagram-worthy."

Fans have been sharing photos of Fuchico on social media, which helped boost its popularity without the company even needing to advertise, he boasted.

"Fuchico was launched just as social media started to be used widely. It fitted with the times."

Kitan Club, which makes various kinds of capsule toys, saw its sales grow from 800 million yen to 1.2 billion yen after the launch of the Fuchico series.

The capsule toy became so popular that the company was asked to create a pop-up shop at the cult Paris concept store Colette and to hold an exhibition in Taiwan.

Now many manufacturers are making capsule toys to appeal to adult consumers, helping to expand the market to around 100 new items each month.

Manufacturer Bandai, which occupies around 70 percent of the capsule toy market, said the products sell well because they are expertly made and they come in huge varieties.

When Bandai began making capsule toys exactly 40 years ago in 1977, the majority of them were cheap, sold mostly at 20 yen, and were of poor quality, general manager Toshikazu Saita said.

"A wide variety of quality products are available at only 200 or 300 yen. I think that's a reason why they're so popular now," said Saita.

He said the quality of the products was down to specialists who "hand-carve prototypes by paying attention to angles and colours."

"The attention to detail is very Japanese," he said.

But to keep costs down, the actual toys are manufactured in China using the Japanese design as a prototype.

Shiki of Kitan Club agreed that attention to detail was what set Japanese capsule toys apart.

"For example, Fuchico's knees and elbows are slightly sprayed with red paint to make them look real," he explained.

"This adds one extra step but we feel we have to do this" even if it adds to the cost, he added.

It certainly appeals to Nana Sakuma, 26, who snapped up four capsule toys in the shape of Japanese food stalls from machines in the Akihabara store.

She said: "I'm really happy to find toys that are so real. When I see real things turned into miniatures, I find them irresistibly cute. I cannot help but buy them."