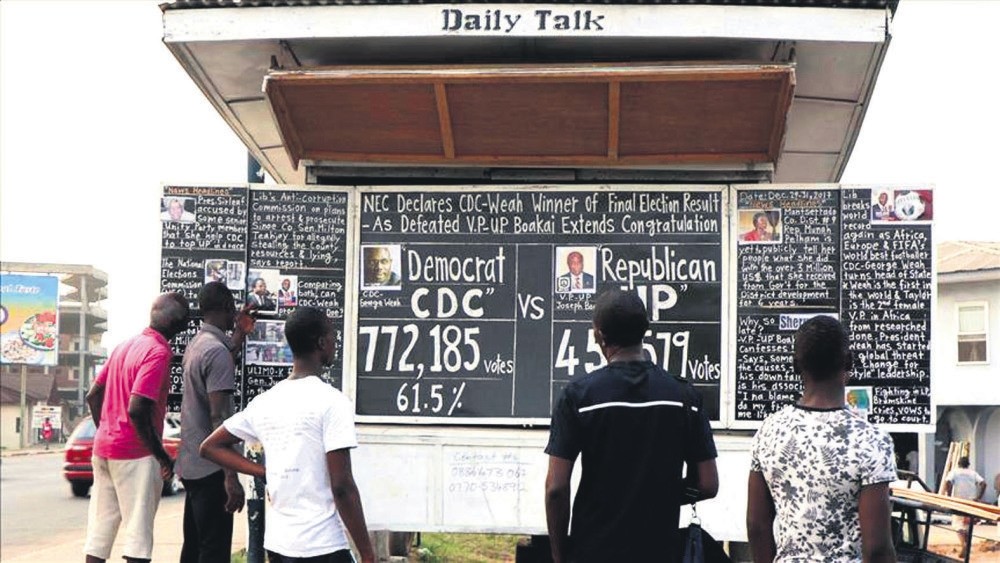 An unorthodox news platform in Liberia's capital Monrovia is providing local and international news to Liberians, who mostly cannot afford to buy a radio, television, and/or newspaper.

The Daily Talk, a chalkboard news outlet, was launched in 2000 to give information to the Liberian public at no cost.

"The chalkboard news outlet was invented to give information to the Liberian public, keep them informed, educate them on things that have to do with the Liberian society and the world at large," Alfred Sirleaf, the publisher of the Daily Talk said.

Sirleaf said that even though space on the chalkboard is small, they are giving more information to the public.

"When you look at the board - what we called the center spread or front page - it has big stories have to do with national issues," he said.

The publisher said the Daily Talk's news stories contain the five W's and one H -who, what, when, where, why and how - the main components of a news story.

"We try to tell people exactly what is happening," he said.

He said his research shows that Liberians are "a bit lazy" when it comes to reading.

Speaking of income generation, Sirleaf said the Daily Talk is sacrificing for the Liberian public because they have "passion to contribute to Liberia" by keeping the people updated on what is happening.

"Sometimes we have a little advertisement which helps us to get stationery, such as cameras and papers."

He added that the audience is people who go by not just the wordings, but also the pictures of the subject. He said his staff consists of seven people who have passion and dedication for the work.

"Our staff goes to the field, captures the subjects of the news and we stick their pictures on the board," he said.

He added that in addition to the seven staff, who get a meager token of appreciation at the end of the month, there are volunteers around the country who file information.

Sirleaf said statistics showed the readership of the Daily Talk increases during elections period and when some controversial thing happens.

He said the Daily Talk is racking up 5,000 readers a day due to the election.

"We attract more readers in the morning and evening when people are making their way to work and home," Sirleaf said.

He also explained that the Daily Talk has three kinds of readers that media institutions around the world do not have.

"We have the pedestrian audience, that is people with no access to generators, electricity, television, and radio and who cannot afford to buy the mainstream newspaper; we have the sitting audience - people who come, sit and read - and then we have the motor traffic audience people who commute in their vehicles," he informed.

Sirleaf said they are making a significant impact by giving quality, factual and credible information for free. He said his idea of setting up a chalkboard news outlet was first dismissed by many people he sold the idea to.

He said that the Daily Talk tailors its grammar to the Liberian version of English so that everyone understands.He appealed to donors to help with funding to expand the Daily Talk to other locations in the country.

"If our people around the country can have access to information like this, they will really appreciate it," he said.

Elkanah Johnson, one of the readers of the Daily Talk, said he reads news from the chalkboard every morning on his way to school.

"This chalkboard newspaper is very helpful. I get information from it every morning and the same information is also reported in the mainstream newspapers," Johnson said.