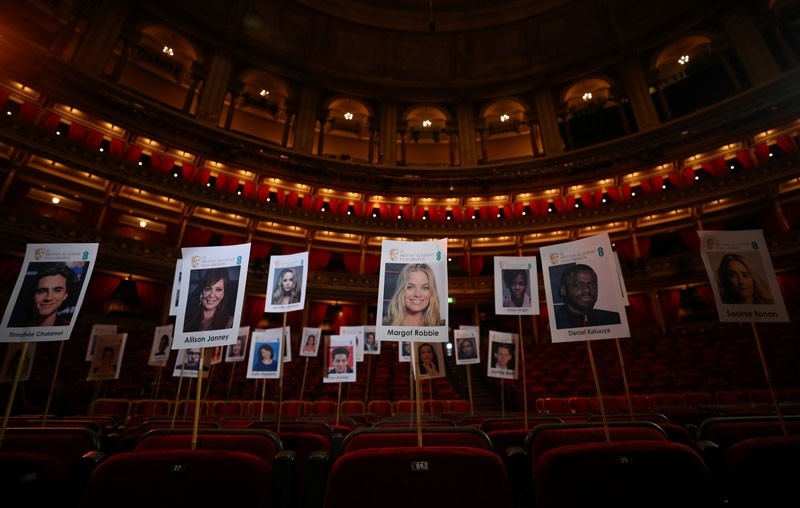 The seating plan for guests ahead of the British Academy of Film and Television Awards (BAFTA) is seen during a photo call at London's Royal Albert Hall in London, Britain (Reuters Photo)
by Feb 18, 2018 12:00 am

Actresses Kate Winslet and Emma Watson joined around 200 British stars in demanding an end to sexual harassment and abuse, in an open letter published Sunday ahead of the Bafta film awards.

Signatories including Emma Thompson, Kristin Scott Thomas, Keira Knightley and Saoirse Ronan, expressed solidarity with the Time's Up movement in the United States and called for donations to a new "justice and equality fund" for victims.

The letter to The Observer newspaper is addressed to "dear sisters", as was a similar statement by US actresses last month, and calls for an international movement to stamp out a culture of abuse exposed by the Harvey Weinstein scandal.

"In the very near past, we lived in a world where sexual harassment was an uncomfortable joke; an unavoidable, awkward part of being a girl or a woman. It was certainly not to be discussed, let alone addressed," they say.

"In 2018, we seem to have woken up in a world ripe for change. If we truly embrace this moment, a line in the sand will turn to stone."

The letter was published ahead of the British Academy Film Awards on Sunday night, when some stars are expected to repeat the protest staged at last month's Golden Globes and wear black in a show of solidarity with victims.

"As we approach the Baftas, our industry's time for celebration and acknowledgement, we hope we can celebrate this tremendous moment of solidarity and unity across borders by coming together and making this movement international," the letter says.

It emphasises that revelations about abuse in Hollywood have now spread across the world, saying the movement is about more than just the entertainment industry.

It highlights problems in Britain such as the gender pay gap and the changes to work that make it more insecure.

"This movement is intersectional, with conversations across race, class, community, ability and work environment, to talk about the imbalance of power," the letter states.

Around 160 activists and academics have signed a sister letter pledging support for the new fund, which aims to make workplaces safe and support victims of abuse.

The signatories thank the high-profile stars for helping "push issues such as sexual harassment and rape into the public consciousness in an unprecedented way".

"We believe that this is a moment in time when we can harness our collective energies to dismantle the wall of silence that surrounds violence against women and girls," they say.