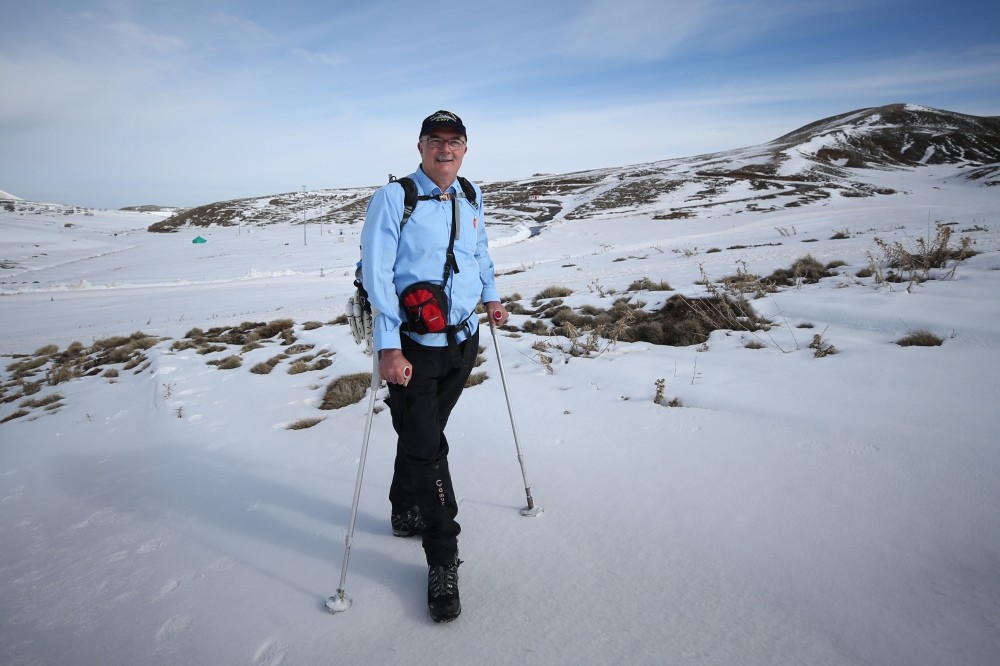 Life is a tricky thing, but a lawyer from Kayseri who cannot use his leg since childhood has become a successful mountaineer with dreams of one day climbing Mt. Everest

Mustafa Kılıçarslan, a physically disabled lawyer from Kayseri who poses an example to people with disabilities with his many mountaineering achievements while using crutches, wants to climb Mount Everest.

Kılıçaslan, who is unable to use his right leg due to polio he suffered shortly after birth, is doing mountain walks and climbing the top of mountains with his crutches. Kılıçarslan does not regard his disability as a disadvantage, and is the most beautiful example of perseverance and hard work by climbing Mount Ararat two times and Mount Erciyes 16 times and reaching the top of close to 30 mountains with his crutches.

Sharing his story with Anadolu Agency (AA), Kılıçarslan said he strengthened his arms by doing hard work in a village as he could not use his leg since childhood.Kılıçarslan said he was a good student and that he got into the teacher's high school after winning the public boarding school exam in middle school. He mentioned that because of his disability, he did not end up going to the teacher's high school and was later enrolled in a normal high school for this reason.

Kılıçarslan said after getting a law degree and then graduating from college, he took up a career as a lawyer.

Kılıçarslan also mentioned that with the help of his friends he started nature walks at the age of 45, followed by mountain climbing, adding that he has climbed the top of close to 30 mountains so far, including Mount Ararat two times and Mount Erciyes 16 times. Pointing to Mount Everest as his next target, Kılıçarslan said he wants to climb Everest if he can find a sponsor, stressing that he feels ready for this climb. "No disabled person from Turkey has been able to do this. I want to be a first in this regard," he added.

He recalled that one of his friends wrote a book about climbing Everest. "I cannot climb up the stairs even one step by stepping on my disabled foot. I clearly walk with a limp. The doctors told me that because of the weakness in my hip bone, too much walking would hurt my backbone, because I was walking unevenly. In the first years I started walking 5 kilometers. After that, I raised the walking distance to 50 kilometers a day. Over time I started mountain climbing," Kılıçarslan continued. "In 2011, I climbed the top of Mount Ararat and went back to Ararat a year later. I reached the summit with a friend who turned this climb into a book under the title of 'Yok Hükmünde Ağrı Dağı Tırmanışı' ['Null and Void Climbing Up Mount Ararat']."

Noting that the reason behind the concept of "Null and Void" is that the state ignored them in the past, Kılıçarsaln said there used to be articles inhibiting the employment of people with disabilities in Turkey, adding that anyone who wants to be a teacher should not have any disabilities to be able to serve in every corner of the country under all conditions. "By climbing Mount Ararat, I wanted to give a message to those who did not accept me to the teacher's school back then," he said.

Kılıçarslan said he quit smoking before starting the nature walks. "I started smoking in my professional life for close to 30 years and stayed away from sports. With a decision I made in 2007, I quit smoking and started climbing. Then I realized that the main disability is not my leg, but cigarettes," Kılıçarslan said, stressing that when he quit smoking he was so relieved that he felt like he was freed from his disability. "As long as I stay healthy, I want to continue mountain climbing and nature walks," he concluded.