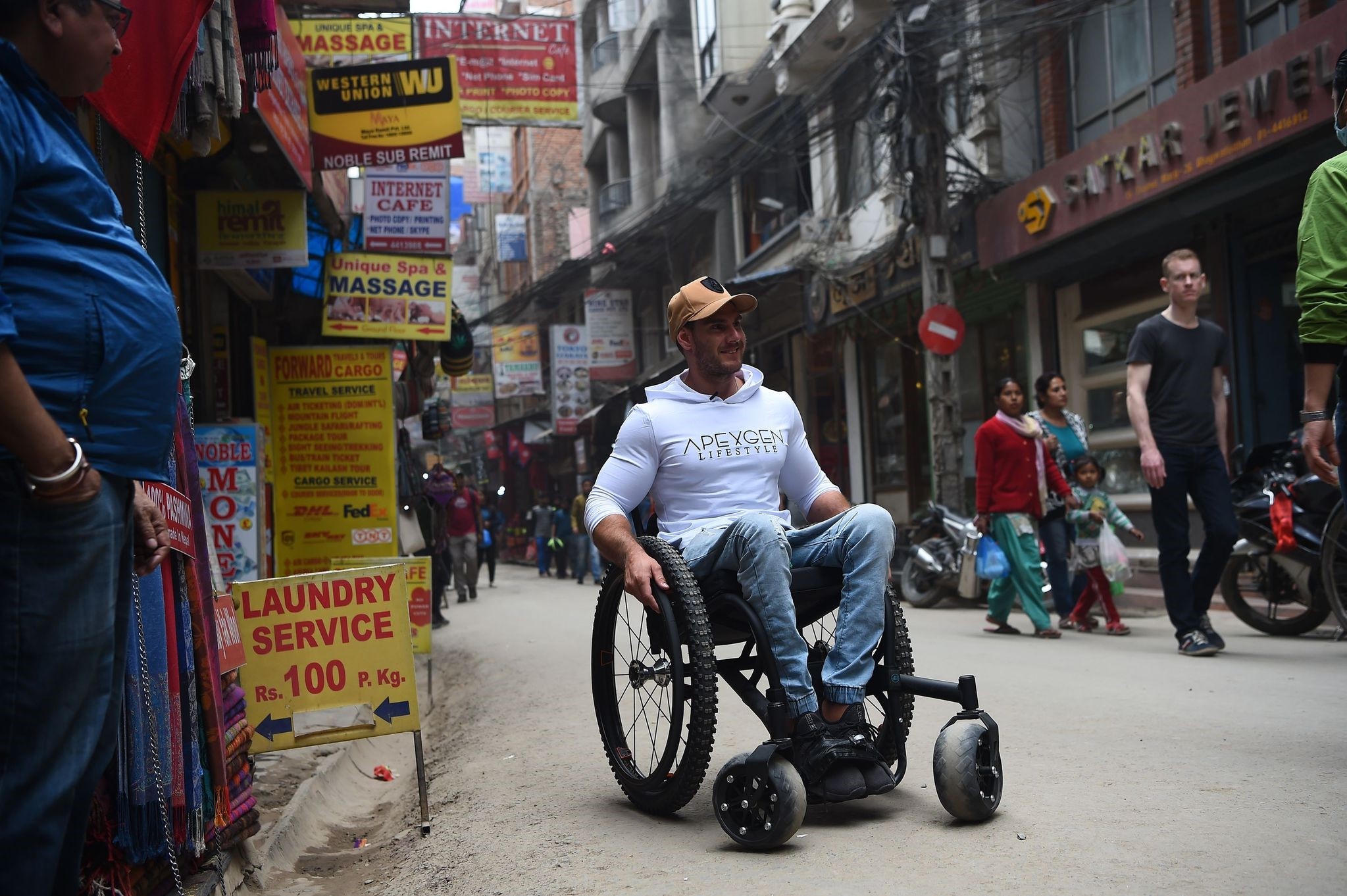 A wheelchair-bound Australian is aiming to become the first paraplegic to reach Everest base camp unaided, a breathless trek he reckons he will make mostly on his hands.

Scott Doolan, 28, sets out Friday for Mount Everest's base camp, which lies 5,364 metres (17,598 feet) above sea level and is traditionally only accessible on foot or by helicopter. He is out to prove that it is also accessible to wheelchair users.

Doolan will be using a specially designed wheelchair with mountain bike wheels when the trails allow, but thinks he will mostly be on his hands with a friend holding his legs in a move he's dubbed "wheelbarrowing".

"I jump out of my chair and my mate Matt, he'll grab me and hold my ankles and I basically walk on my hands," he said, explaining a technique that's similar to the wheelbarrow race of school sports days.

He also spent time in Australia's Blue Mountains to get some experience on trails, wearing a mask that limits oxygen flow in a bid to replicate the high altitude conditions that await him in the Himalayas.

The dramatic trek to Everest base camp begins from Lukla -- 140 kilometers (86 miles) east of Kathmandu -- and follows an ancient trading route that once linked Nepal and Tibet, taking hikers over a soaring pass before dropping down into the lush Khumjung valley.

A series of narrow suspension bridges crisscross the river that runs along the valley floor, before the route climbs sharply towards the base of Mount Everest.

Along the route there are steps and narrow paths hewn into the valley wall, forcing hikers to clamber over rocks and occasionally trek in snow or mud, all at an altitude where limited oxygen can cause headaches and nausea, and if left untreated a potentially fatal build-up of fluid in the lungs.

"I have no idea what it's going to be like. Obviously there are going to be parts when I can't physically go in a wheelchair so I'm going to get out and use my hands. That will probably be the most challenging of it all," Doolan said.

"Hopefully I don't get altitude sickness."

Every year, Everest's base camp is transformed into a nylon tent city of around 1,500 people for two months starting in April, when climbers descend on the mountain with the sole aim of reaching its summit.

Meanwhile, around 5,000 trekkers a year take the eight to 10 days to trek to the base of the world's highest peak, according to figures from Nepal's tourism department. Doolan expects to take about twice as long and will then have to retrace his route back to Lukla.

Doolan has been confined to a wheelchair since he was 17 when he broke his spine in a motorcycle accident.

An athletic teenager, it took him a few years to get back to the gym after the accident, but once he did, it helped him come to terms with his disability, he said.

And then he met Matt Laycock, founder of the Apexgen clothing brand, which has a philanthropic mission that aims to build awareness of mental health and disability under the tagline "Rise above it".

It was Laycock who came up with the idea that Doolan should try to become the first paraplegic to get to Everest's base camp mostly under his own power. The company is backing the trip, which has cost Aus$70,000 (US$54,400) including Aus$15,000 for Doolan's custom wheelchair.

Laycock pitched the idea to him over coffee -- and Doolan initially said no. But a few weeks later he came round to the idea.

"Anything you set your mind to you can achieve it. That's what I've learned so far. Your mind is your only limitation," said Doolan of the precipitous challenge awaiting him.