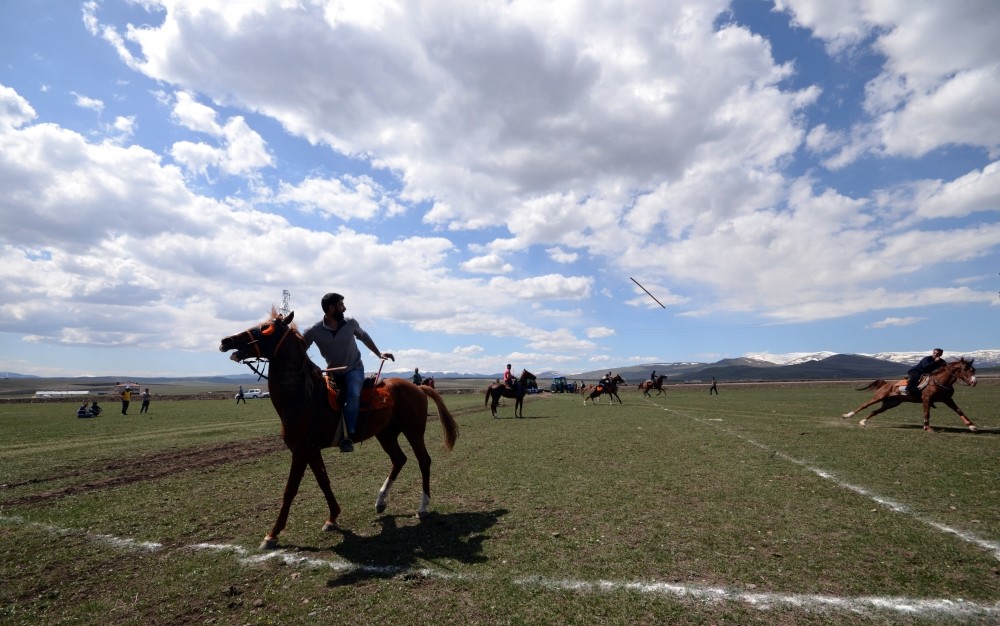 Played since the time of the early Turkic people in Central Asia, mounted javelin throwing is returning with increasing popularity in the eastern province of Kars

Mounted javelin throwing, which is known as the war game of the Turks that has been played since their time in Central Asia and mentioned as a traditional equestrian sport, has become a main tourist attraction in Kars, where the game is played throughout the year.

With the increasing number of tourists coming to Kars via the Eastern Express, interest in the mounted javelin throwers has multiplied.

Sportsmen who organize competitions for tourists who come in the winter months in the Selim and Sarıkamış villages in Kars get ready for tournaments held in the summer months, starting from spring.

The javelin throwers who gallop their horses in the fields among the snow-covered mountains struggle vehemently. Horses are prepared for the competitions in the Kekeç village, where preparation matches are organized.

One of the sportsmen, Çağlar Özbaş told Anadolu Agency (AA) that village people come together and play mounted javelin in every season and on weekends to sustain this traditional sport.

Explaining that they continue to play the sport even if the snow melts, Özbaş said, "We keep this tradition alive throughout the year. We have some matches with a scoring system. We organize preparation matches before them, coming together. We try to sustain this sport."Türkan Kürü, one of the visitors coming from Ankara to Kars, said that they came to watch this equestrian team sport. "My father is interested in mounted javelin throw. When we heard they play javelin here, we decided to come. I like this sport because of my father."

Talking about her happiness at seeing this sport still sustained in the villages, Kürü said, "Javelin throwers and horses are perfect. I am proud of them as a person from Kars. When I return to Ankara, I will mention the beauty of this place. It was a good experience for me."

Murat Kılıçbey, one of the spectators, stressed that mounted javelin throwing is a means of having fun for them throughout the year. Kılıçbey added, "Mounted javelin throwing is especially played on snow but it is a great excitement for us to see its continuance after the snow melts. This sport is professionalized here. The organization of such events on every weekend in Kars is an opportunity. We spend our weekend in here."One of the javelin throwers, Turan Tepe mentioned the efforts needed to play the sport. "There is a fierce javelin throwing competition now. The weather is really good. When the feet of horses touch the ground, it is better. It is a traditional sport and we try to sustain it." 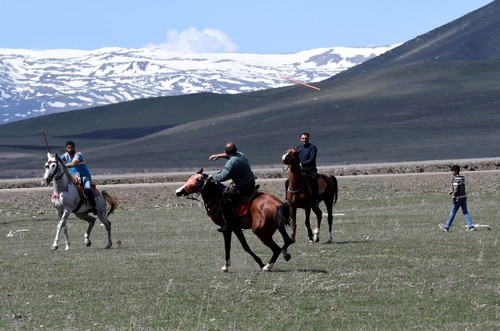 Mounted javelin, which is played on horseback, was the main game of the Turks during ceremonies and is considered to be the oldest Turkish sport. It was first introduced to Anatolia in 1071 by the Seljuk ruler Alp Arslan. The sport continued to be popular entertainment as a war game during the time of the Ottoman Empire and became the biggest show game of the palace until the 19th century. A dangerous sport as well, it was banned by Sultan Mahmud II in 1826, but after him the game continued to be popular again and was spread all over the country. Currently, the sport is still popular in the eastern Anatolia and continues to draw the attention of the locals as well as domestic and international tourists. Today, apart from Turkey, mounted javelin is also played in Iran, Afghanistan, Turkmenistan and other Asian countries where people of Turkish origin live.How is it played?Mounted javelin is played by two opposing teams, each composed of six, eight or 12 throwers. The opening team members take their positions on opposite sides of the field 70 to 130 meters away from each other. There are three "end zones" at each end of the field, each about 6 meters deep, being a team's waiting area, thus meaning a neutral zone and the opposing team's throwing area. Each team has its own flag. The horses should be older than four years. A medium height horse is preferred because tall horses are not quick to maneuver.

Following the introduction and handshakes, the game begins. The throwers hold the javelin in their right hand. One rider from each side rushes forth toward the opposite side until they are within 30-40 meters of the other side. Then one player shouts the name of a player from the other team, challenging him to enter the game.

Players who succeed in hitting a player from the opposing team with a javelin win a point, but they lose a point if the javelin hits the horse instead of the player.The game is played in two periods of 45 minutes each.