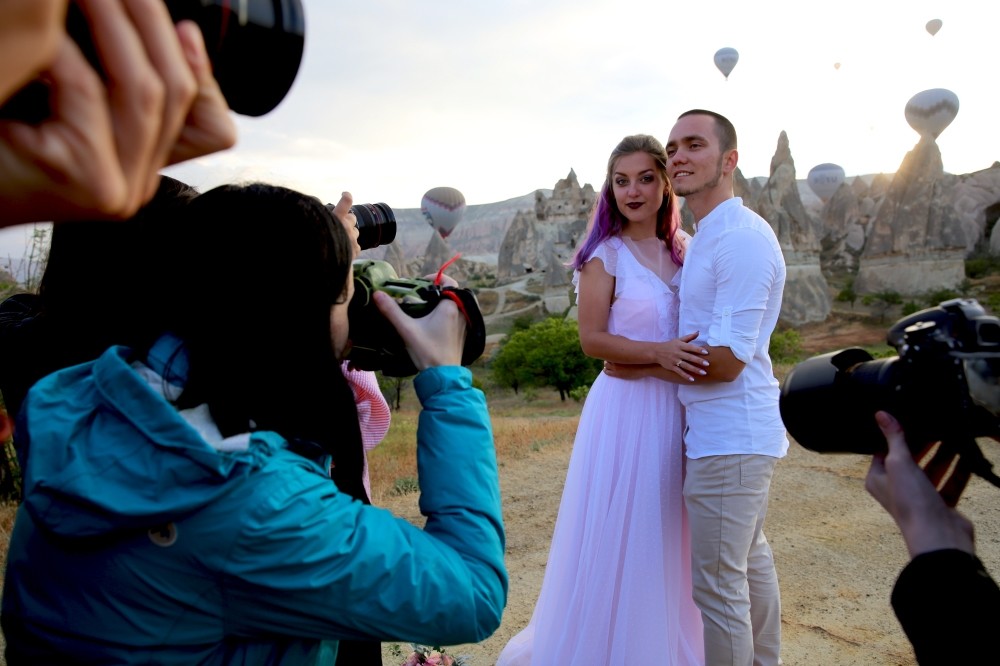 Jacky Ziu and Linda Giaco from Chengdu, China are getting married in a month, but not before they traveled thousands of kilometers to get their wedding photos taken in Cappadocia, Turkey.

And they are not alone. Thanks to an outlandish landscape, dotted with fairy chimneys and hot air balloons, Cappadocia is seeing a stream of foreign tourists - newlyweds in particular.

Speaking to Anadolu Agency (AA) Ziu and Giaco said that they arrived with a 14-man photography team and would have photo shoots at different locations in the region for two days.

Ziu said he learned about Cappadocia on the internet and thought the view here was very interesting. "The region is very authentic. It is very beautiful," he said.

Most of the couples are from China and Russia. Photoshoots begin early in the morning; continue well through the day until after sunset. Along with their photography teams, the couples are willing to go the extra mile to pick the best location, catch the best light and choose the right angle - for photographs that they may cherish for the rest of their lives.

"We wanted to have a beautiful photo album before the wedding. Once we saw what Cappadocia has to offer, we decided this was it. There are many beautiful places in the world but none like Cappadocia.

"We even want to shoot some photos when we are up there in a hot air balloon," said Ziu.

Parnan Tong, in charge of Ziu and Giaco's photography team, said: "We have 14 crew members in total. We have shot some very beautiful pictures and videos of Ziu and Giaco. We will return next month with another couple."