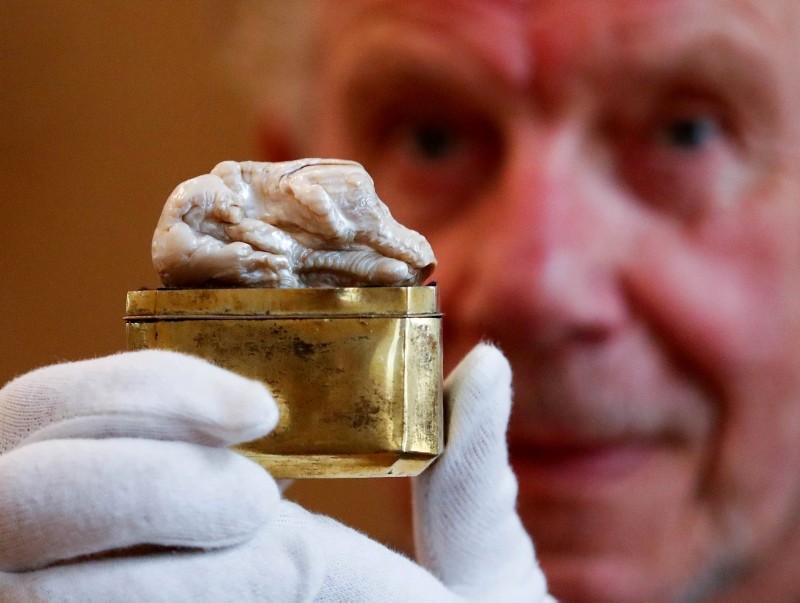 Herman Dommisse, the owner of The Sleeping Lion Pearl, which once belonged to Catherine the Great and believed to be the world's largest freshwater pearl, shows the pearl before being auctioned in the Hague, Netherlands May 28, 2018 (Reuters Photo)
by Jun 01, 2018 12:00 am

The world's largest known freshwater pearl, which once belonged to Catherine the Great, was sold Thursday in the Netherlands for 320,000 euros ($374,000), auction house Venduehuis said.

Known as the Sleeping Lion pearl due to its distinctive shape, the pearl was likely formed in the first half of the 18th century in Chinese waters, possibly even the Pearl River.

The auctioneers said the jewel weighs some 120 grams (around 4.2 ounces) and is almost seven centimeters (about 2.7 inches) long making it one of the three largest known pearls in the world.

Around 1765, the pearl was shipped to Batavia, now known as Jakarta, by a Dutch merchant of the United East Indies Company. It was there that it came into ownership of the company's accountant, Hendrik Coenraad Sander.

"After Sander died, the pearl was auctioned off in Amsterdam in 1778 and acquired by Catherine the Great, Empress of Russia," the auction house had said.

Catherine had the pearl displayed in the Hermitage in St. Petersburg until 1796. In the turbulent years that followed her death, the pearl vanished and ultimately surfaced again in Poland.

After more adventures, it was bought in 1865 by a Dutch goldsmith and remained in his family's possession for four generations, before the "Amsterdam Pearl Society bought the pearl in 1979 intending to research it and trace its history," the auctioneers said.