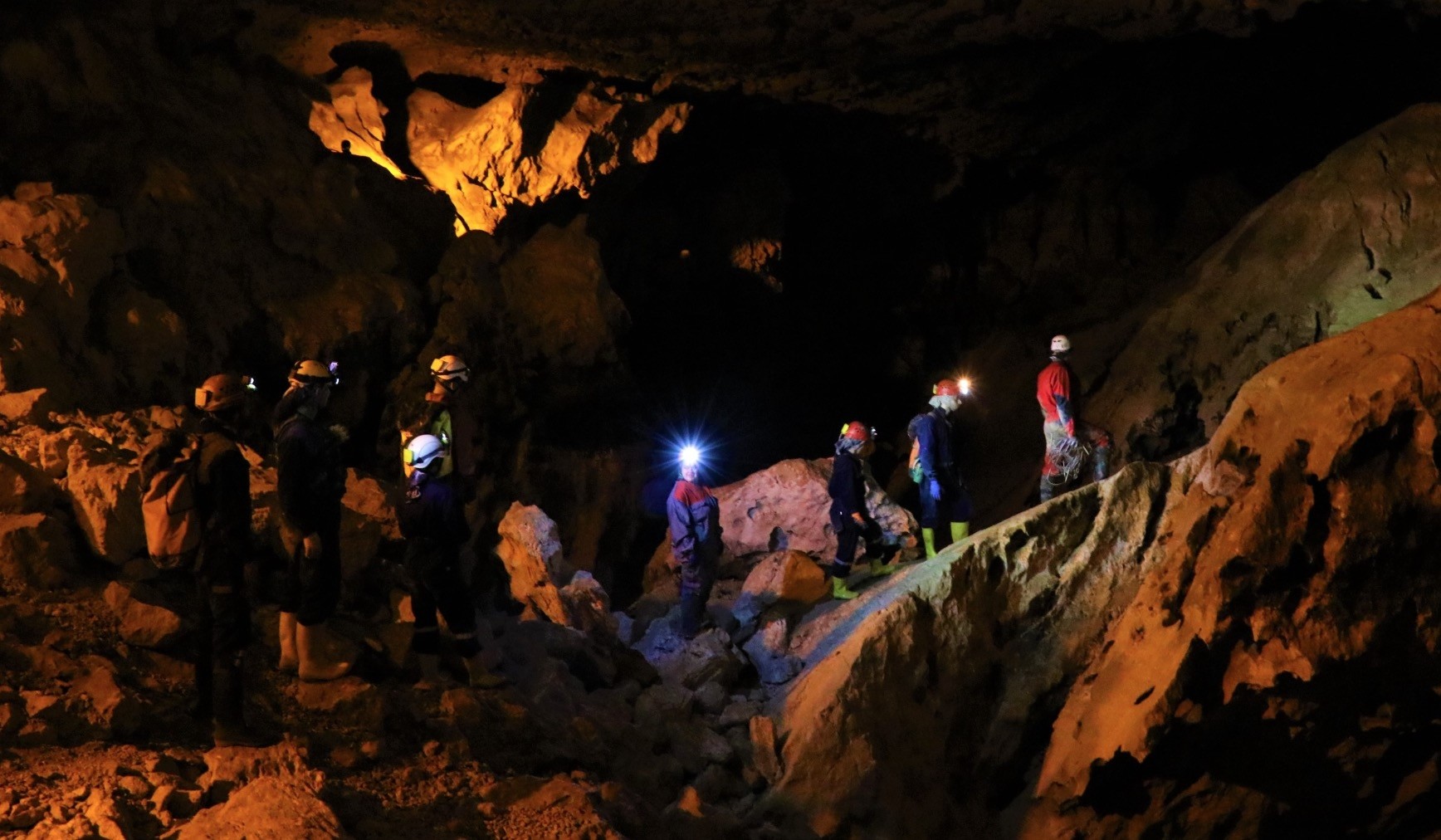 Students camped for three days and stayed in the cave for 13 hours in groups of nine, wearing coveralls, boots and hard hats and carrying carbide lamps.
by Anadolu Agency Jun 18, 2018 12:00 am

Twenty-seven undergraduate nature and adventure lovers explore the mysteries of İnsuyu, the first cave opened for tourism in Turkey

Nature and adventure lovers, 27 undergraduates began a journey to discover the mysteries of İnsuyu Cave, the first open for tourism in Turkey. The students, members of the Hacettepe University Cave Research Club (HUMAK), are exploring İnsuyu, located on the calcareous slopes of Sarpgüney Hill, 13 kilometers from the city center. The cave attracts tourists and those interested in spelunking with its calcite and crystal, natural formations.

The students, studying fields such as sociology, biology, geology and nuclear energy engineering, camped for three days and stayed in the cave for 13 hours in groups of nine, wearing coveralls, boots and hard hats and carrying carbide lamps.

They walked in the mysterious tunnels, climbed and boated, reaching areas of the cave not visited before and measured and observed water level, creatures and bacteria activity.

The data is used in scientific cave research.

Mehmet Çolak told Anadolu Agency (AA) that he started mapping İnsuyu Cave in 2016 and has been searching and observing the cave for two years.

Çolak said: "There are newly-opened paths; that have never been visited before. The cave needs to be mapped again."

Implying the cave was 9,000 meters long according to work conducted in 2011, Çolak said: "In the measurement of 2016, its length was 13,000 meters. We saw it increased more this year. We passed a nearly 750-square-meter area with boats in the cave."

Çolak said that the HUMAK work was used in mapping literature and published by Hacettepe University, stressing they conduct joint work with other cave clubs.

Since boreholes around the cave decrease the water level, Çolak added: "Insuyu Cave is in bad condition in terms of water level. It has suffered a drought. Even the tourist lake was dry. The water level is in the lower parts of the cave. This level decreased by almost 30-40 meters in two years."

Since İnsuyu may be the longest cave in Turkey, Çolak said: "Spelunking is one of the riskiest sports in the world. It is dangerous. The more you enter the cave, the harder it gets to communicate. To communicate without interruption, special two-way radios or a telephone line should be installed. However, we are students and cannot get this equipment with our budget. We have another technique. Let's suppose that we enter the cave with eight people. In case of any injury or risk, three people go out and inform others waiting outside. If people in the cave are stuck and cannot come back at the predetermined hour, those outside are alarmed. In the second hour of this alarm, if they cannot hear from the people in the cave they are fully alarmed and start rescue work."

Geology engineering student Bahadır Seçen indicated new members join the group and these activities are an education for them. Since spelunking is not very common in Turkey, as a group, they aim to make people love it. He said: "As İnsuyu has horizontal features, we often take a walk, but there are some techniques in these walks like being careful not to drop rocks. As equipment, our hard hats, light, coveralls and boats are indispensable. Light in the cave is really important. If those who do not deal with it professionally enter the caves with phone light, they cannot see anything when the light goes out. Accidents generally happen this way."

"We need to observe the newly-opened paths. This is why we stay 13 hours in the cave. This also helps to educate our friends who have just started this sport," he added.

Seher Acer, who has been spelunking for a year, said: "I entered a cave that has water for the first time. I am excited since we will use boats inside. Besides, I am happy to be in İnsuyu, one of the longest caves in Turkey. There is a risk every time. However, I trust my experienced friends and myself. Therefore, I am not worried. We try to decrease the risks with our equipment."

Nuclear energy engineering student Elif Gökçen Güler reported that she stayed in the cave for eight hours before, and now she will stay for 13 hours.

Discovered by Dr. Temuçin Aygen in 1952 and becoming the first tourist cave in Turkey in 1966, İnsuyu draws attention for its natural formations adorned with stalactites, stalagmites, columns, dripstones and calcite crystals.