Bodybuilding: The pursuit of beauty in war-torn Kabul 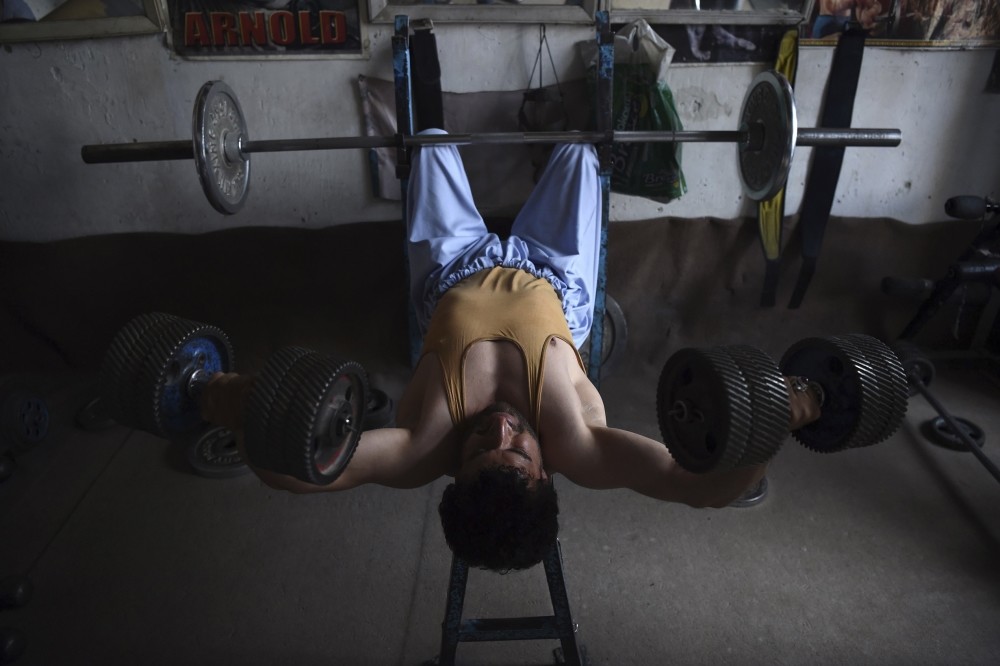 An Afghan bodybuilder exercises using dumbbells made from spare car parts.
by Jun 26, 2018 12:00 am

Hindi music pumps from the speakers as dozens of Afghan men grunt and sweat their way through a workout beneath the watchful eye of a young Arnold Schwarzenegger, whose muscle-bound image hangs from the wall.

The scene inside this Kabul gym is repeated at venues all round the capital.

The sport has a long tradition in Afghanistan, and was even tolerated by the Taliban when they ruled the country from 1996-2001 - so long as the men wore long trousers as they lifted.

But as security deteriorated and the initial euphoria after the US invasion dissipated into stress, trauma and loss, more and more young men took to the gym.

"Everyone, everywhere in Afghanistan, wants to have a beautiful body shape, and this sport is a favourite sport for every young man," says Hares Mohammadi, a law and political science student turned champion bodybuilder who is also a trainer at one gym in Kabul.

The 25-year-old, dressed in grey, strikes different poses showing off his carefully honed muscles, and warms up his chest and shoulders ahead of a regional bodybuilding competition.

Despite a surge in bombings and suicide attacks, life goes on, he says, and young Afghans want to "make their mark". One way is through sporting success.

So, along with Schwarzenegger, other stars from Hollywood and Bollywood such as Sylvester Stallone and Salman Khan are held up as heroes, and the gyms stay busy for hours, filled with music and camaraderie as men tone their bodies to perfection.

It was not always so.

Afghan bodybuilding legend Aziz Arezo reminisces about his time as a teenage lifter, when there were "very, very few people" in the capital who knew anything about the sport.

He himself was only inspired to take it up after seeing movies and posters featuring foreigners such as Schwarzenegger.

"Arnold was my... role model," he says, smiling as he remembers how expensive postcards featuring the star were.

Speaking to Agence France-Presse (AFP) between lifting weights at his small gym in Kabul, Arezo - his physique not quite what it was in his glorious bodybuilding past - reels off his long list of accolades, including being named Afghanistan's first master sport bodybuilder by the country's Olympic Committee in the 1970s.

It is a long career, and at times a lonely one.

Though now a trainer himself, guiding hundreds of Afghan youths through lifts and crunches, he never had the guidance of one.

Years ago he made the equipment and dumbbells in his gym from spare car parts as there was no place to buy them.

"I have been a teacher of myself," he says, adding that his dumbbells are "more efficient than foreign dumbbells."

"Nowadays, bodybuilding clubs are everywhere in the city, and everyone has made a gym of his own," he says.

He has trained hundreds of bodybuilders in his career, but is suspicious of new methods employed by many young Afghans, including taking protein supplements to boost their abilities.

"I believe if you do sport or exercise naturally, it is better than protein," he says, warning of detrimental side effects."Before my workout... I was drinking carrot and banana juice, and post-training, I was taking two eggs, three glasses of milk, one bowl of beans and lentils, and it was everyday food for me," he says.

"Today's bodybuilding is not natural."

Regardless of the method, sport can help ease the psychological trauma of nearly four decades of war, says Ali Fitrat, a psychology professor at Kabul University.

Afghans are stressed socially, culturally, financially and politically, he said, citing fighting, insecurity and poor economic conditions as some of the most devastating factors.

He says sports such as bodybuilding can play a "vital role" in helping to release stress and tension.

But, like Mohammadi, he also suggests that young men in particular have a strong desire to make their mark.