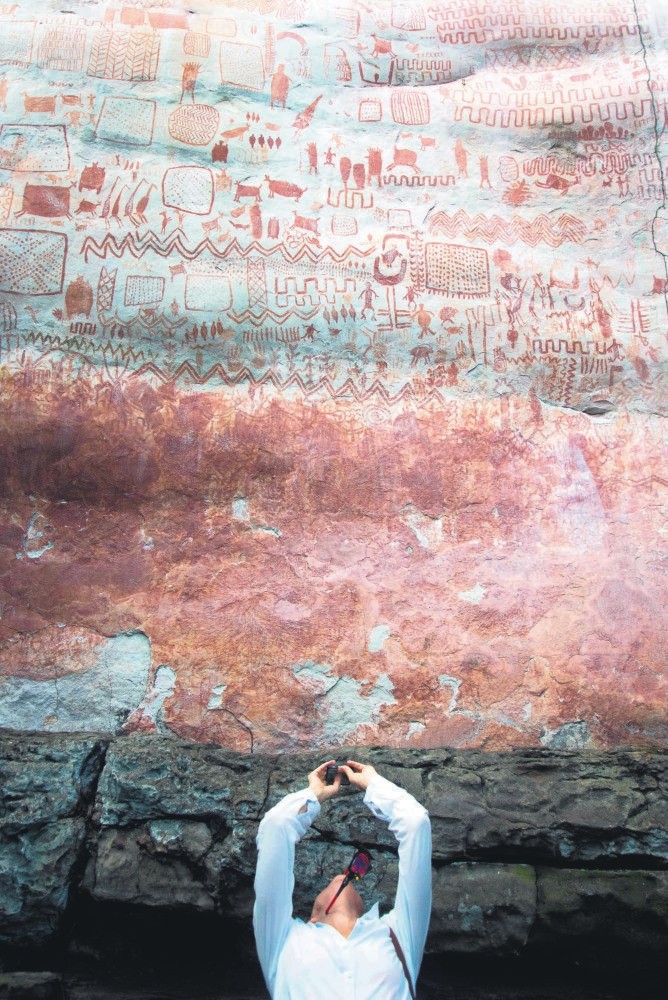 Deep inside the lush green and humid Amazonia jungle, a sine wing path stops abruptly in front of a giant rock face decorated with ancient paintings of anacondas, jaguars and tortoises.

For millennia, indigenous Colombians have been illustrating their mythology in rock art, but these national treasures lay hidden - and preserved - during decades of war between government forces and Marxist rebels.

In the heart of the Guaviare jungle, a strategic area that armed groups continue to fight over lays a UNESCO World Heritage site national park in which the Serrania de Chiribiquete table top mountains stand tall like giant drums.

The rock frescoes adorning their sides occupy an invaluable place in the understanding of Amazonian settlement.

"It was very difficult to work in the Guaviare because it was the epicenter... of the war these last 50 years," Ernesto Montenegro, general manager at Colombia's Anthropology and History Institute (ICANH), told Agence France-Presse (AFP).

Since the 2016 peace accord that ended the war with FARC guerrillas, adventurers have ventured forth once again to try to decipher the secrets of the ritual drawings, some of which date back at least 12,000 years.

The area is sacred to the indigenous people of the jungle and not everyone has the right to even approach the rock art.

"Only wise men are worthy of entering sacred sites, in which spirits dwell. Common mortals should not even allow their thoughts to wander in," said Andres Lopez, a historian at the institute, as he traipsed through mud to a rock painting spanning 30 meters in height and 100 meters in length.

That site lies an hour by jeep away from the village of Raudal in the Guaviare department, an area known for coca plantations and cocaine production that once marked the front line between government soldiers and FARC rebels.

An hour by boat down the Guaviare River, where military vessels mounted with machine guns still patrol, a hamlet on stilts, surrounded by right-wing paramilitaries since 2000, remains the stronghold of the First Front - former FARC dissidents who refuse to disarm.

Montenegro says that doesn't stop archaeologists returning to Guaviare, insisting they are "benefiting from the peace process" that ended the decades-long guerrilla war.

This area was declared a "protected archaeological site" by the culture ministry at the end of May, in a move initiated by the ICANH, which also organized the first international mission to the site, alongside the French Institute for Andean Studies (IFEA).

There are other unknown sites, for which "there is photographic evidence... but it hasn't been possible to find them because back then there wasn't any GPS" and the existing maps are imprecise, she says while displaying pictures of dancers, hunters and even amorous relations.

Mystery surrounds the paintings. Even carbon dating cannot shed light on when the drawings, created with a mineral mixture rich in manganese that turns orange once oxidized, were created due to vegetable components.

The only indications come from the ashes of fires burned by the artists in front of the rock faces.

Crucially, though, this area was declared a World Heritage Site at the start of this month - the ninth such listing in Colombia.

Spanning an area of 2.7 million hectares, Chiribiquete is Colombia's largest natural park and the UNESCO listing was vital to protect the area from oil and mineral prospectors.

It is home to some 70,000 pictograms but just as importantly to the Chiribiquete emerald hummingbird, seen as the only endemic species in the Colombian Amazon, and the jaguar, the big cat only found in the Americas that is threatened by the loss of its habitat due to deforestation.