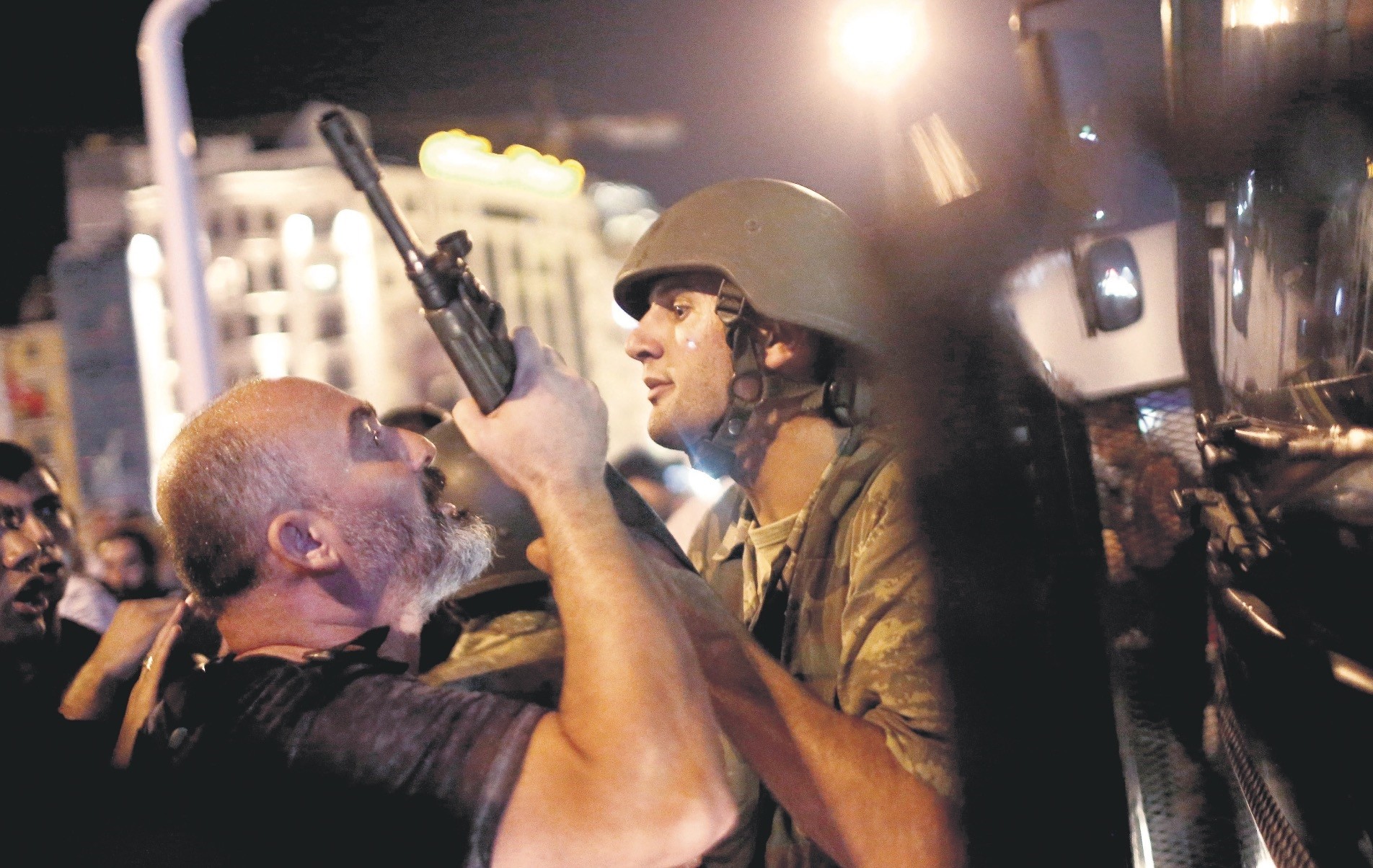 A civilian tries to take the rifle of a soldier at Istanbulu2019s Taksim Square. This act of resistance was just one of the many that became a symbol of the people's defense of democracy against the coup attempt.
by Miraç Tapan
Jul 14, 2018 12:00 am

On July 15, Turks were armed with one thing while standing up against coup plotters: Their faith in democracy and their country. That night, hundreds of ordinary people did extraordinary things to save their country from a terrorist group

On the day of July 15, 2016, everything was as normal as it could have been. People went about their usual business, called it a day and were ready to enjoy the weekend with their families and friends. Families sat around the dinner table, enjoying delicious meals. While they were sipping their tea, social media started to bubble with rumors that soldiers were out on the streets, taking over important government buildings and locations. At first, nobody believed that a military coup was possible. Turkey, which went through military coups over the years, was scarred by past experiences. In the 21st century, it seemed impossible and stupidly bold for the military to try taking over the state.

However, everything turned out to be true when the first images of soldiers closing off the Bosporus Bridge began to circulate on social media. When the news broke out, everybody froze like lightning had struck. But a moment later, people poured to the streets to stand tall for the democracy.

He urged people to go out on the streets, resist the coup and stand tall for democracy.

The fate of Turkey and Turkish people changed with this broadcast.

It was inevitable to witness extraordinary events during this extraordinary night. This is the story of people who became the heroes of July 15 with what they accomplished on the night of the reawakening of democracy.

The woman who stood alone against the coup plotters 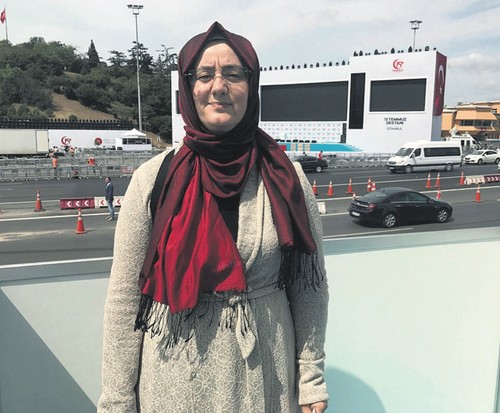 When the coup news broke out people rushed to the streets in defense of democracy. Safiye Bayat, a 34-year-old mother of two, was one of the courageous people who stood up for democracy. Leaving her house around midnight, Bayat joined a group of people who were heading for the Bosporus Bridge, one of the three bridges that connect the two sides of Istanbul, which was under the control of the coup plotters.

After an hours walk she arrived at the bridge, she headed to the place where the tanks were parked. As she fearlessly walked up to the soldiers taking over the Bosporus Bridge, she was armed with only one thought, that the soldiers would not kill an unarmed woman. Passing through the police forces, Bayat confronted the commander of the troops on the bridge. Without mercy, the putschist commander, grabbed her arm and moved his rifle near Bayat's cheek and pulled the trigger.

"I felt my whole face burning. But I was not scared: I was determined. I told them I was not armed and I was only there to talk to them. They asked me to leave and as soon as I turned my back to them, a clash broke out. They opened fire into the air but people were already running towards them."

When the clash broke out, many were injured but Bayat stayed to help instead of running away.

That night some 250 people were killed and hundreds of others injured, including Bayat herself. But the video images showing her standing up against coup plotters, made her one of the icons of the coup resistance.

Despite losing a leg, veteran has no regrets

Among the same group that Safiye Bayat arrived with at the Bosporus Bridge, was another man, a man who stood up against coup plotters by putting his life at stake. After night prayers, Sabri Gündüz went to bed only to be awoken by his wife who said that something strange was going on. Turning on the TV in Gündüz saw that a military coup was occurring. Saying goodbye to his family, Gündüz left home, thinking that he had to do something to stand up for democracy. On his way to meet his friends, Gündüz heard the call made by President Erdoğan and decided to walk to the Bosporus Bridge.

"My wife called me and told me not to go to the bridge as the coup plotters were shooting people. But I did not hesitate and headed towards the bridge no matter what."

As soon as Gündüz arrived on the bridge, he tried to talk the soldiers out of it. However, the coup plotters had no intention to stop.

"A young man was shot. I asked the soldiers to allow me to pick him up. As I held him, one of the coup plotters ordered soldiers to open fire. I thought 'This is it.' Two seconds later I was shot in the knee."

After the injury, Gündüz was taken to the hospital. It turned out that his leg was broken and the bullet went through his aorta. In the last two years, Gündüz underwent 47 surgeries. In his last surgery, his leg was amputated under the knee.

Despite a series of surgeries and look at years of rehabilitation, Gündüz does not regret going to the Bosporus Bridge that night.

"I never regretted my decision. I will do it again if necessary. A man can live without his leg but not without his country. It is an honor to bleed for Turkey and for democracy."

Metin Doğan: The man who stopped the tanks 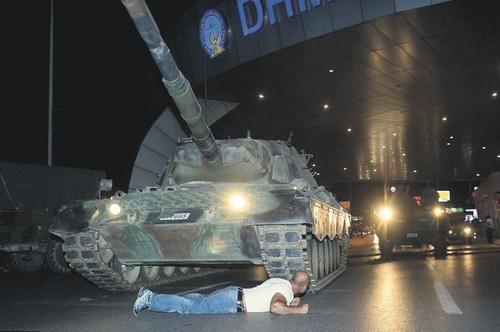 "If my death would prevent other deaths and save my country, I would do the same thing a hundred times over," said Metin Doğan who made headlines with an image showing him lying in front of a tank at the gate of the airport.

While coup plotters were shedding blood on the Bosporus Bridge, another group of soldiers led by high ranking coup plotters were heading to Atatürk Airport, the biggest airport in Istanbul to stop people from going in and out of the city.

When Doğan heard that a military coup was taking place, the 40 year-old medical student left his house without hesitation to be a part of the group walking towards Atatürk Airport to stop soldiers from taking over. As soon as he arrived, he was shocked to hear gunshots.

He stood against the tanks that were heading to the airport. When the tanks did not stop, he laid down on the ground, in the way of the tank. Once the tank stopped, the police took over the tank; Doğan had managed to stop a tank, and perhaps many more coup plotters from taking over the airport.

A woman stopped the deployment of coup plotters

As Istanbul was under attack by coup plotters, the capital city of Ankara was also under siege by the same people. To get hold of the Parliament and presidential palace, the high ranking putschists decided to deploy soldiers from Denizli and Aydın from Çardak Airport.

Elif Dağdelen Sarı, a mother of two, took her children and went out on the streets of Denizli after watching the coup manifesto broadcast by the putschists. After returning home, she heard President Recep Tayyip Erdoğan on the TV and decided to head to Çardak Airport to interrupt the plans of the coup plotters.

"When I arrived at the airport, I saw that other people were also there to stop the coup plotters. Soldiers did not let us pass. Then, I realized the door of a military vehicle near me was open."

Sarı opened the door and got inside the vehicle but there was a soldier. "I asked him whether he was serving FETÖ or not and told him to hand over the keys of the car."

While Sarı was trying to convince the soldier, his commander arrived.

"He ordered me to get out of the car but I resisted. Things got heated in the blink of an eye, I got off the car but thanks to the help of the others, we managed to stop the car and the deployment of the soldiers."

Thanks to Sarı and others at Çardak Airport, the troop deployments planned by coup plotters never took place. With the sparked fired by a woman, people of Denizli managed to stand up against the coup attempt and prevail.

As democracy crumbles, a baby is born

On the morning of July 16, the coup plotters were defeated but some were still resisting the people and the armed forces of the state. Anesthetist Dr. Mehmet Çelik, living on the Anatolian side of the Istanbul, was trying to get to the other side of the city. As the bridges over the Bosporus were closed, Çelik was looking for a way to get to the other side of the city. As he was driving, he heard that the Bosporus Bridge was open. When he arrived in Altunizade, he saw that traffic was still closed but people were running to a car which was stuck in traffic. Thinking that people might need his help, Çelik headed to the car only to see a pregnant woman in labor. He introduced himself to the crowd and got into the car to help the woman.

"As soon as I started to help the young mother, the baby was born in my hands. I could not believe it. Since I am not a gynecologist, I had never thought that I would be in that position. It was a thrilling experience, I still cannot believe it," said Çelik.