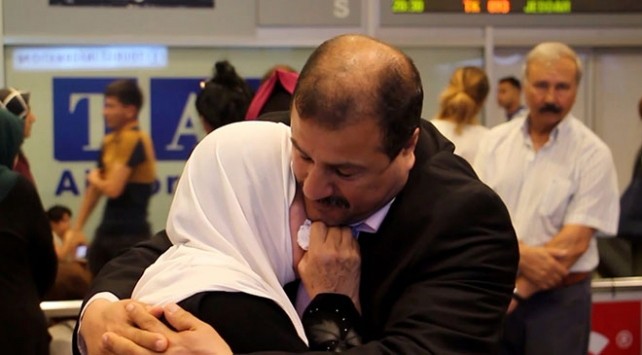 Palestinian Fahmi Kenan who had not seen his mother for 16 years was finally able to embrace her in Istanbul. Living in Turkey for a while, Kenan was expelled from Palestine and forbidden to enter the West Bank.

Kenan and his 70-year-old mother finally reunited at Istanbul Atatürk Airport. Emotional moments were seen during the reunion. The mother, Fathiyyah Kenan, broke into tears of happiness after seeing her son along with recalling the pain of the past years.

Thanking God when she saw her son, the old mother embraced Kenan and said, "Years have passed without seeing and meeting my son. I longed to embrace him. My yearning cannot be described."

'Son and father could not meet'Speaking to Anadolu Agency (AA) about her experiences, the mother said, "They expelled my son from the West Bank and condemned me to much pain."

She said that her son was imprisoned in Israeli prisons in the West Bank five times due to various reasons however she was able to visit him there, however after he was expelled she didn't see him again, until now.

Fathiyyah said she was not able to see her son because of both her health problems and the attitudes of Israeli authorities. "He would be back from Gaza after one or two years. However, this suspension continued for 16 years. My son was taken from us, and a separated family and a grieved mother were left behind him. My grandchildren were raised in Gaza. We could not see them either."

Spending his life in the struggle against Israel, Kenan, 47, was taken into custody five times, starting from the time of the First Intifada.

Behind bars for four years in the West Bank, Kenan said that he was free for a while but was watched by Israel during this period. He said he took refuge at the Church of Nativity located in Bethlehem in 2002 and was among those sieged by Israel for 39 days, Kenan remarked that he was se

nt to Gaza providing that he would be back in one or two years after Israel was accepted to lift the siege only if some people would be exiled to Gaza and places out of Palestine.

Kenan said that Israel did not keep the promise. He was not allowed back in the West Bank, and his family could not enter Gaza to visit him, either.

Noting he came to Turkey for his doctorate one and a half year ago, Kenan explained that he later brought his wife and children here.

13-year-old İsra, the daughter of Kenan, saw her grandmother for the first time. She was born in Gaza under the blockade, İsra highlighted that she experienced many difficulties and one of them was having no relatives in the city.

She said she saw was happy to see her grandmother for the first time, and added, "I am also happy that my father met his mother after a long period."