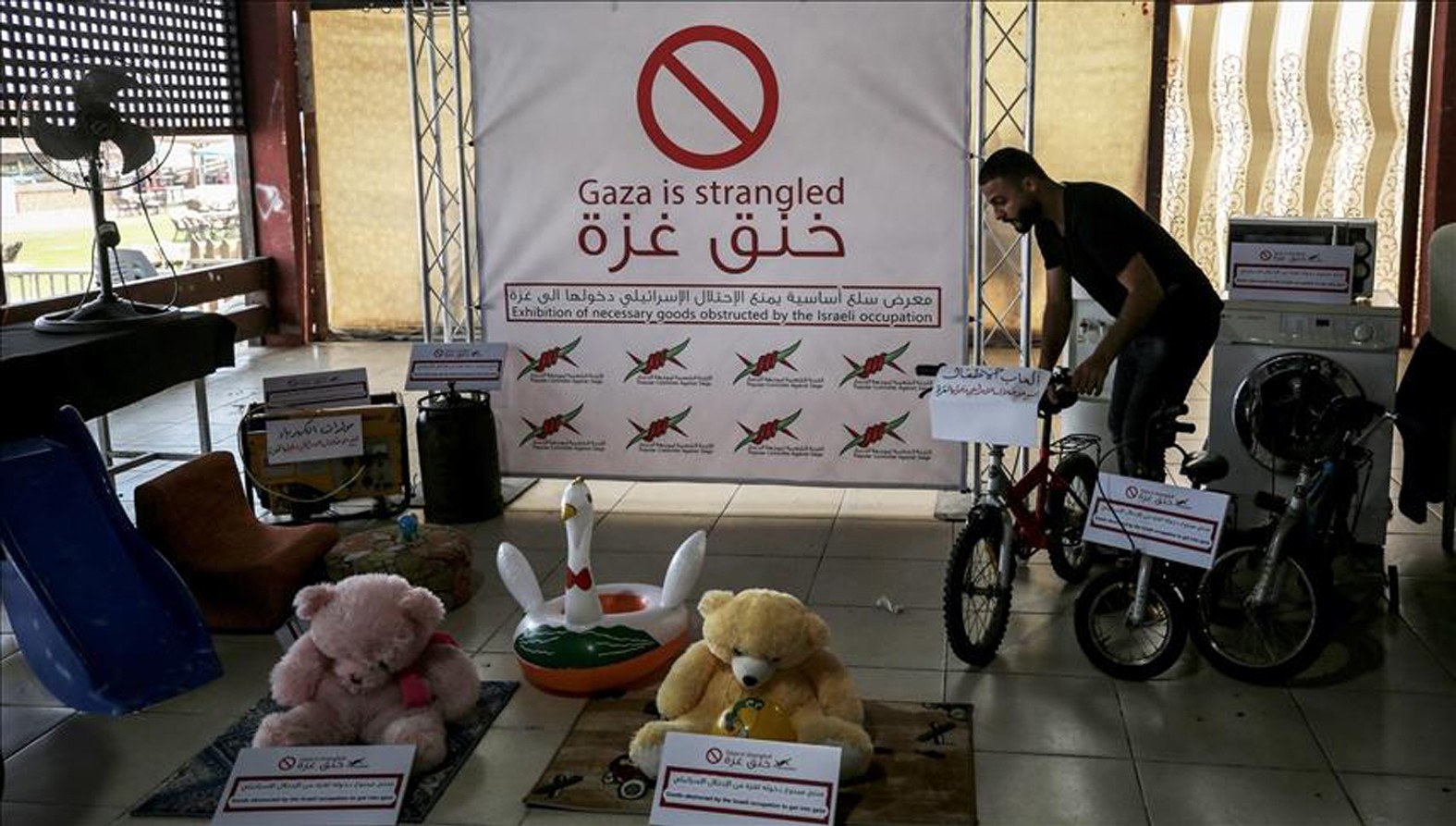 Childrenu2019s toys are displayed in the exhibition in Gaza, showing basic materials banned due to Israelu2019s blockade.
by Anadolu Agency Aug 06, 2018 12:00 am

An exhibition was organized in the Gaza Strip to showcase more than a thousand products prohibited from entering the city by Israeli authorities.

The exhibition, organized by the Popular Committee to End Gaza's Siege, put on display various products varying from a wedding dress, baby bottle to soap and diapers.

"The Israeli blockade makes it impossible to meet even the most basic commodities," Jamal al-Hudari, the committee head, told Anadolu Agency. "The exhibition aims to draw the world's attention to the Israeli blockade."

He stressed that the industrial sector in Gaza was about to die.

"The Israeli blockade and prevention of the essential raw materials has led to the closure of 80 percent of the factories in Gaza. This is another side of the policy Israel practices to suffocate Gaza and destroy the whole financial sector," he said.

The coordinator of Government Activities in the Territories (COGAT), the organization carrying out Israel's activities on Palestinian lands, said only humanitarian needs are allowed to enter Gaza through a one-by-one control mechanism.

"The reason for this decision is burning kites and balloons that are sent to Israel from the Gaza Strip. The humanitarian needs that are allowed to enter Gaza are food, medicine and medical supplies," the statement by the COGAT said.

Israeli Prime Minister Benjamin Netanyahu announced on July 9 that Kerm Ebu Salim border crossing, the only way through which commercial goods could enter Gaza, would be closed.

"We are implementing very strict measures against Hamas immediately. As an important step, the Kerm Ebu Salim border crossing will be closed. There will be additional steps," Netanyahu had said. In addition, on July 17, Israel decreased the fishery range across Gaza waters from nine miles to three. As a result of the air, land and sea blockade that Israel imposed on the Gaza Strip since 2006, about two million Palestinians suffer from a great humanitarian plight. The Gazans are deprived of basic human needs.

Identified as "the largest open-air prison in the world," Gaza is harmed due to the electricity problems. In addition, the infrastructure and health services have collapsed in Gaza, where residents can only access electricity six hours a day.

Responding to the humanitarian crisis, Gazans have been rallying since March 30 to draw global attention to the issue. However, more than 150 Palestinians were killed by Israeli troops, in addition to the dozens of people confined to wheelchairs and crutches by Israeli snipers.