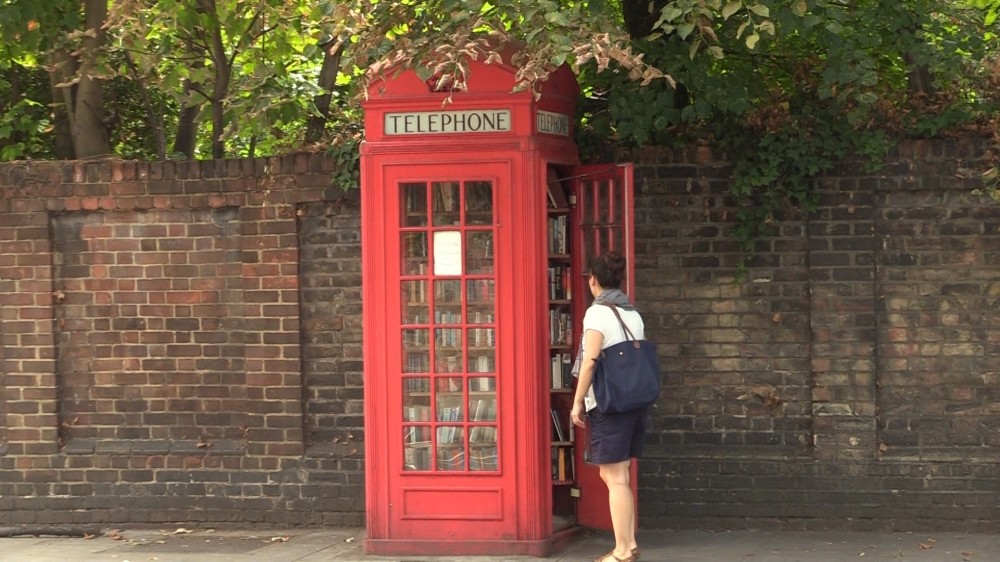 A woman stands near an iconic Red English Telephone booth used as a micro library in Lewisham district of London.
by Anadolu Agency Aug 15, 2018 12:00 am

After cellphones largely replaced public payphones, Britain's iconic red phone booths have taken on a second life with a host of varied and interesting purposes.

A longtime symbol of British culture, together with black cabs, red double-decker buses, and the Big Ben, thousands of such phone boxes have been left to their own fate, apart from a few which are maintained and kept clean for tourists to take photos with.

Under a scheme by British Telecom (BT), the K2 telephone boxes, designed by renowned architect Sir Giles Gilbert Scott, are now open for alternative use by those who would like to rent them. Once thronged by people ready to make a phone call, the booths now welcome people looking for a cuppa, a sandwich at lunchtime, or as somewhere to get their smartphones fixed.

More than 150 books are accessible in one of them, which has served as a "mini library" since 2013 in Lewisham in southeast London. Among the books available for free borrowing are even some books by Turkish authors.

Another box in Hampstead, North London, serves as a coffee shop. Prices at this one-square-meter shop are lower than other cafes, and they offer a wide variety of specialty teas and coffees.

The proprietor, Fouad Choaibi, 28, told Anadolu Agency (AA) that he has run the shop as part of Lovefone, a smartphone repair firm, for the last two years. Choaibi said he came to London from his home country, Spain, in 2016 seeking work and now has a good income and never feels alone due the many repairs he does.

Yet another retired red booth serves as a falafel and salad bar.

Describing London as the "capital of different ideas," shop owner Idris Bouaziz said as vegetarian food got more popular in big cities, he decided to turn this old phone box into a snack bar. Saying that the booth's expenses are reasonable, Bouaziz said other retired reds could be used by entrepreneurs with good ideas.

The red phone booths, located across the U.K. and in Commonwealth countries, are also used as first aid centers, ATMs and beach huts.