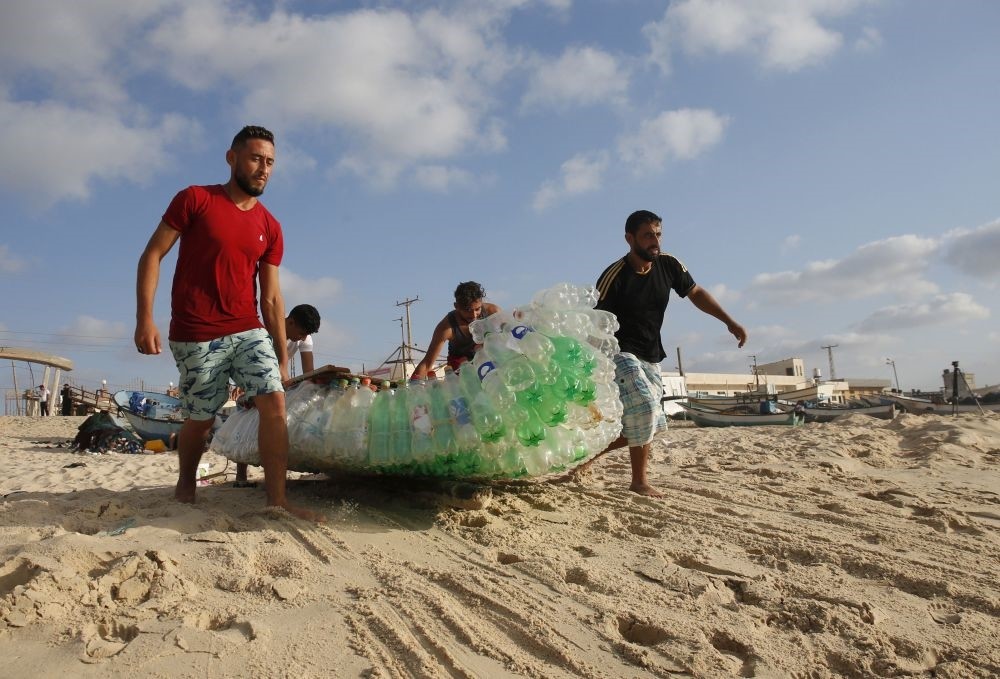 Palestinian fisherman Mouad Abu Zeid (R) and his friends carry his boat that he made from 700 empty plastic bottles on a beach in Rafah, Gaza.
by Aug 17, 2018 12:00 am

With hundreds of empty plastic bottles collected from the shores of Rafah in the southern Gaza Strip, fisherman Muath Abu Zeid has turned litter into a floating source of income.

The Palestinian father-of-four used glue and old nets to bind the bottles into a small fishing boat that he hopes will help him support his family.

Simple but effective, the 700-bottle craft is capable of carrying up to eight people out to sea, according to its 35-year-old skipper.

A broad slab of wood lashed to the top serves as a seat, allowing the Abu Zeid to row a few hundred meters out from shore - far enough to go fishing.

It takes him about eight hours to pull in between five to seven kilograms of sardines, mullet and other small fish with his rod.

He sells his catch to passersby on the nearby corniche, making between 20 and 40 shekels ($5-11). Muath's two younger brothers - Mohammed, 23, and Ashraf, 20 - accompany him on his daily excursions. Neither were able to find work elsewhere.

"I'm a house painter but because of the difficult situation I'm unemployed," said skipper Muath, a descendent of refugees from a village near Jaffa in present-day Israel. "So this boat has been a lifesaver for me and my family."

Under a crippling Israeli blockade more than a decade, Gaza suffers 44 percent unemployment, rising to a "staggering" 60 percent amongst the young, according to 2017 World Bank figures.

Muath picked up the idea for the boat on YouTube, where he saw hobbyists designing boats using plastic bottles discarded by holidaymakers on beaches.

"I appreciated the idea and said to myself, why not preserve the environment and create a living for me and my family - and that's what happened," he said.

The craft cost him about $150, borrowed from his father.

He hopes to buy a fishing net soon so he "can pull in larger amounts of fish, sell them and live a decent life."

The craft is fragile and he's hemmed in by the frontier with neighboring Egypt, but he says the waters along the border have plenty of fish waiting to be caught.