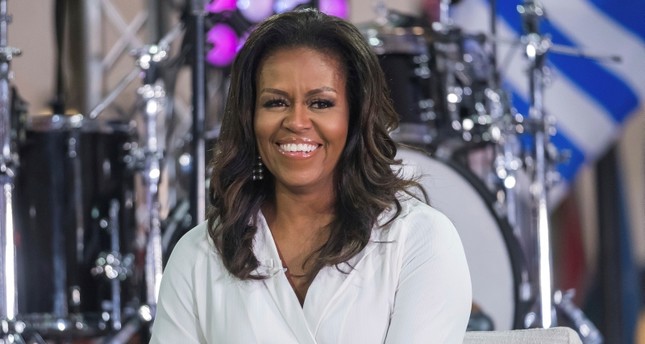 In this Oct. 11, 2018, file photo, Michelle Obama participates in the International Day of the Girl on NBC's "Today" show in New York. (AP Photo)

Michelle Obama says she felt "lost and alone" after suffering a miscarriage 20 years ago and underwent in vitro fertilization to conceive her two daughters.

"I felt like I failed because I didn't know how common miscarriages were because we don't talk about them," the former first lady said in an interview broadcast Friday on ABC's "Good Morning America." ''We sit in our own pain, thinking that somehow we're broken."

"I realized that as I was 34 and 35," the famously fit Mrs. Obama said in excerpts from an ABC special set to air Sunday. "We had to do IVF."

The revelations come ahead of Tuesday's release of Mrs. Obama's memoir "Becoming," in which she writes openly about everything from growing up in Chicago to confronting racism in public life and becoming the country's first black first lady.

The Associated Press purchased an early copy of "Becoming," one of the most anticipated political books in recent memory. Mrs. Obama has offered few extensive comments on her White House years. And memoirs by former first ladies, including Hillary Clinton and Laura Bush, are usually best-sellers.

In "Becoming," Mrs. Obama lets loose a blast of anger at President Donald Trump, writing how she reacted in shock the night she learned he would replace her husband in the Oval Office and tried to "block it all out."

She also denounces Trump's years-long "birther" campaign questioning her husband's citizenship, calling it bigoted and dangerous, "deliberately meant to stir up the wingnuts and kooks." Trump suggested Obama was not born in the U.S. but on foreign soil — his father was Kenyan. The former president was born in Hawaii.

She expresses disbelief over how so many women would choose a "misogynist" over Clinton in 2016. She remembers how her body "buzzed with fury" after seeing the infamous "Access Hollywood" tape, in which Trump brags about sexually assaulting women.

Mrs. Obama also accuses Trump of using body language to "stalk" Clinton during an election debate. She writes of Trump following Clinton around the stage, standing nearby and "trying to diminish her presence."

Mrs. Obama launches her promotional tour Tuesday not at a bookstore, but at Chicago's United Center, where tens of thousands of people have purchased tickets — from just under $30 to thousands of dollars — to attend the event moderated by Oprah Winfrey.

Share on Facebook Share on Twitter
Previous in Life The U.S. Food and Drug Administration plans to require strict limits... Next in Life An earthenware seal dating back 8,000 years has been unearthed in...
DAILY SABAH RECOMMENDS