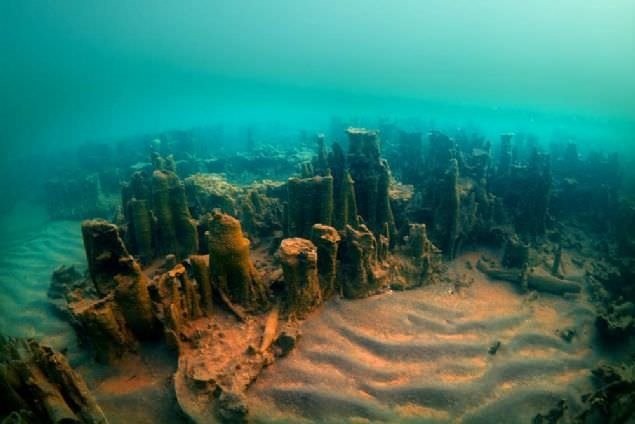 A total of 200 attendees of the diving school opened by the İpekyolu Municipality of Van, which was charged by the Interior Ministry in an attempt to improve diving tourism, will have the opportunity to see the secrets of Lake Van.

In addition to its historical and natural beauties, Lake Van attracts attention with its fresh, clear and blue water. Works have been initiated to make the lake the center of diving tourism. Lake Van, which impresses visitors with its natural beauty, hosts diving enthusiasts in its waters which have many shades of blue. A total of 200 people attending the diving school opened by the İpekyolu Municipality has the opportunity to see the microbialites, known as the world's largest underwater fairy chimneys, newly discovered fish species, a Russian shipwreck and underwater creatures such as pearl mullets living in Lake Van. There has already been domestic and foreign demand for diving activities which are expected to make a significant contribution to the tourism potential of the city in the upcoming process.

Secrets of Lake Van to be shown to world

İpekyolu Governor and Deputy Mayor Cemil Öztürk told Anadolu Agency (AA) that they have opened diving courses in 50 different branches to contribute to the social and cultural activities. Explaining that there is high demand for diving schools for people to discover the secrets of Lake Van, Öztürk said, "There is intense participation both from Van and the neighboring cities. Van is a city of tourism. We want to contribute to this tourism city. Both domestic and foreign tourists coming to our city have the opportunity to see many beauties. We want to further increase these beauties. We need to make the best use of Lake Van in tourism. In this sense, we want to show the secrets of the lake to both Van and the world."

Demand from Japan and Armenia

Diving trainer Serkan Ök said that they had been conducting research in Lake Van for a long time and they had the opportunity to see the Russian shipwreck and the world's largest microbialites in the depths of the lake.

Ök stated that they give practical information after theoretical one at the diving school, adding, "There are microbialites resembling fairy chimneys in Nevşehir beneath Lake Van. We need to bring this into the diving tourism. We opened a diving school in this context. Many people from outside the province have attended in a short time. Also, demand has started coming from Japan and Armenia from abroad. We are trying to do our best for the development of the diving tourism. The divers are very surprised to see the microbialites beneath the lake. Now, diving tourism has started in Lake Van. People from diving schools in many cities, especially Ankara, want to come to Lake Van."

Zekeriya Çelik, director of cultural and social affairs at the İpekyolu Municipality, stated that they are highlighting social activities in the municipality and they have implemented a number of relevant important projects. Indicating that there are colonies called corals in Lake Van, Çelik said, "We wanted to contribute to the recognition of these beauties. People dive into the lake and discover the beauty under the water. In this sense, we aim to contribute to diving tourism, which has an important place in the world."