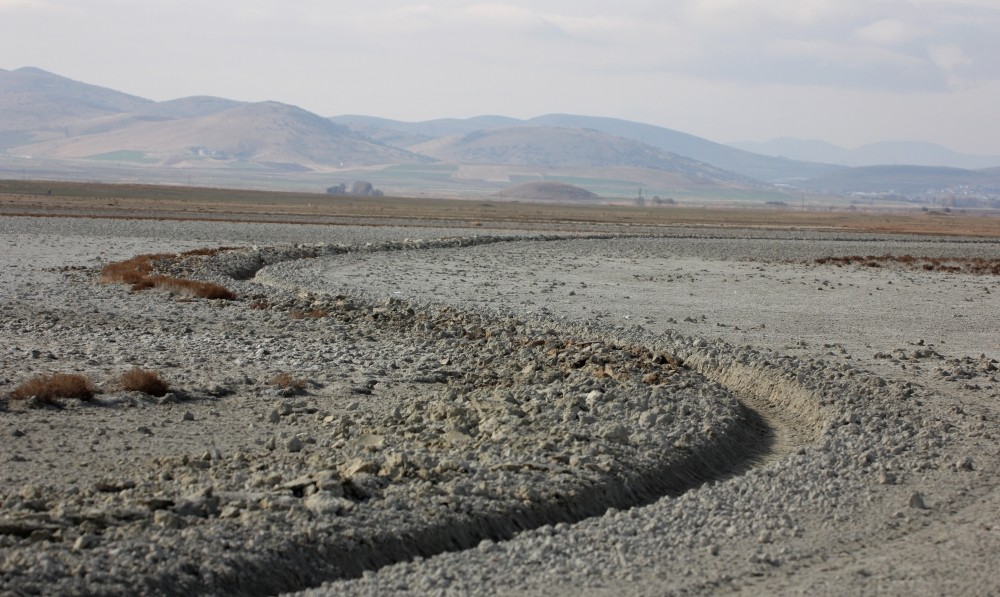 Decreasing water levels at Lake Seyfe Bird Sanctuary, located on the borders of Kırşehir's Mucur district, has left birds on the migratory route without food.

The lake is protected by the Ramsar Convention on Wetlands of International Importance, specifically as waterfowl habitat. It often dries up in summer months, but the water level recovers with the coming of autumn.

However, with lower than average rainfall this November, most of the migratory birds continue their journey without staying at the lake where there is not enough water.

The cranes, which started their remigration nearly 20 days ago, continued their way after feeding and resting in the little water of the lake. Flocks of geese headed to other wetlands after resting at the lake, where they could not find enough food due to the lack of water.

Lake Seyfe Ecology Association Chairman Ömer Çetin said the bird sanctuary here is on one of two migration paths in Turkey. Stating that the lake is also a gathering center, Çetiner said the birds stay here if there is water and continue on their way after feeding and resting.

He implied that the cranes were able to properly rest there approximately 20 days ago as the water level of the lake rose in the last rainfall. Unfortunately, the geese did not have the same luck.Çetiner pointed out that the drying of the lake in autumn is unfortunate. "The water level, which rose with rain runoff about 20 days ago, offered an opportunity for the migrating cranes to rest and feed. Following evaporation in sunny weather, the water completely disappeared. Currently, migrating geese flocks continue on their way, being deprived of feeding opportunity," the chairman continued.

Highlighting that rainfall should not be the only source draining into the lake, Çetiner said: "Unfortunately, global warming is very real. It is not right to make the beauty of the Seyfe Lake rely only on rainfall. We do not have enough rainfall. There is a project about the water that will come from Yamula Dam. The work for this project has progressed, but it is not finished. The water from the dam will both increase the income of our citizens in the region, and the lake will be fed as water flow to the basin rises. It is important to have water flowing from the Seyfe, Malya and Horla springs, which feed the lake. We give importance to the water coming from the spring of Seyfe because this water creates small islets and bogs. This provides an environment where birds can hide and build nests. We want the work on this issue to be accelerated."

The Lake Seyfe Bird Sanctuary is home to endemic plants and 187 bird species, of which 27 are endangered.