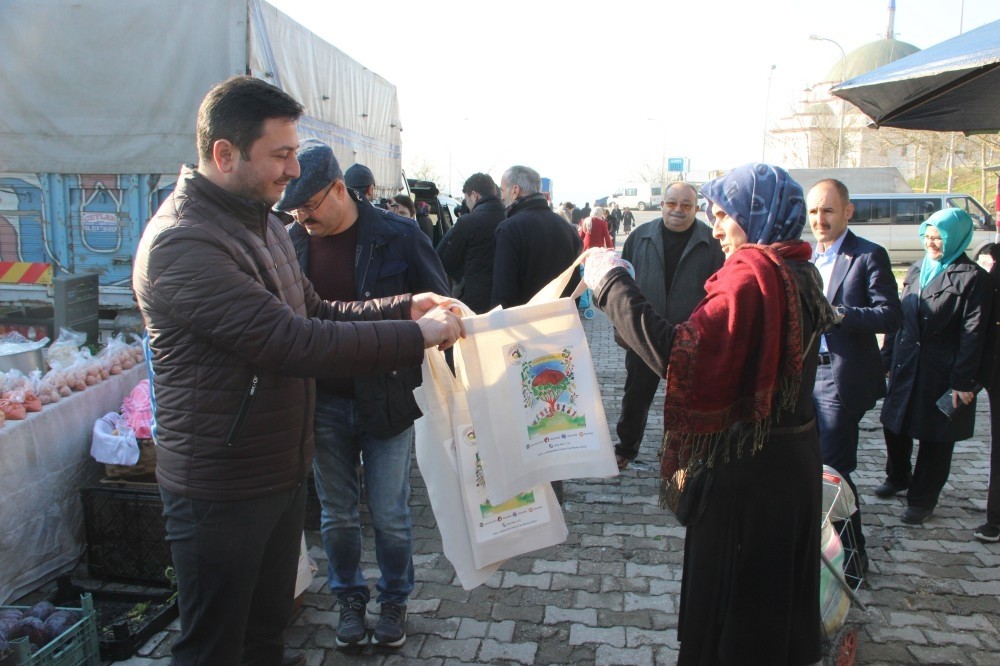 Municipality officials distribute canvas bags to citizens in the northern city of Du00fczce on Dec. 9. Plastic bags will be sold for TL 0.25 and citizens are encouraged to use environment-friendly bags for shopping.
by Daily Sabah Dec 11, 2018 12:00 am

A landmark law came into force Monday to help Turkey fight against environmental pollution. Under the amendments, plastic bags given for free will have a fee and businesses giving them for free will be fined

A new environmental law that came into force Monday makes the sale of plastic bags mandatory instead of free handouts and orders businesses to set up container-deposit places for the return of bottles and similar materials. The landmark decision will contribute to Turkey's efforts against plastic pollution and zero waste campaign that aims to further promote recycling.

Starting next year, plastic bags handed out to customers at the counters in supermarkets and shopping malls will be sold for TL 0.25 ($0.05), a price tag that will be increased once every year. No date is set for mandatory sale of plastic bags but container-deposit practice will be mandatory starting from January 2021. The government will charge a fine of TL 10 for every square meter of the responsible shop if they hand out plastic bags for free. Similarly, producers of bottles, plastic packaging without deposits will face fines.

A United Nations report says an estimated 5 trillion plastic bags are used worldwide every year, and they mainly contribute to maritime pollution as some 8 million tons of plastic including bags are dumped into the ocean every year, killing marine life and entering the human food chain. A number of countries and some American states have already introduced bans or restrictions on single-use plastic bags, including France, Belgium, China, Hawaii and California.

A late contributor to global recycling efforts, Turkey still managed to make strides by upgrading its recycling facilities and raising awareness against the use of plastic in recent years. Compulsory charge for plastic bags is considered a revolutionary change by Turkish environmental officials who say each citizen uses an average of 440 plastic bags a year in the country of nearly 80 million people.

The new law also brings fines for owners of motor vehicles that did not have exhaust gas emission measures and increases fines for wrong, polluting storage of fuels and for illegal dumping of such materials. Under an amendment, municipalities and companies will be given incentives if they set up zero waste management system for sorting and collecting recyclable waste.

Turkey is also among the countries seeking to contribute to fighting against climate change and seeks access to international funds for the fight. Speaking to Anadolu Agency ahead of joining discussions at an international climate change summit in Poland, Minister of Environment and Urbanization Murat Kurum said Turkey expected to be included to the Green Climate Fund. The fund is a financial mechanism established by the U.N. and seeks to assist developing countries in the fight against climate change. Incorrectly classified as a developed country, Turkey seeks to amend its status in the summit.

In order to be eligible for financial support to carry out its initiatives, it applied to the U.N. on Nov. 15 to switch its status from a developed to a developing country.

Kurum said that though Turkey was a fast-developing country, its historic responsibility in terms of global emissions was very low. He said Turkey's roadmap for 2030 goals to cut off emissions was 21 percent. "In 2030, we will have 246 million tons of less greenhouse emissions if we can achieve our goal," the minister said. "We have a huge potential to decrease emissions and we need international assistance to achieve it," he added. Turkey increasingly invests in renewable energy in recent years and seeks to attract foreign investors in solar, wind energy and similar fields.