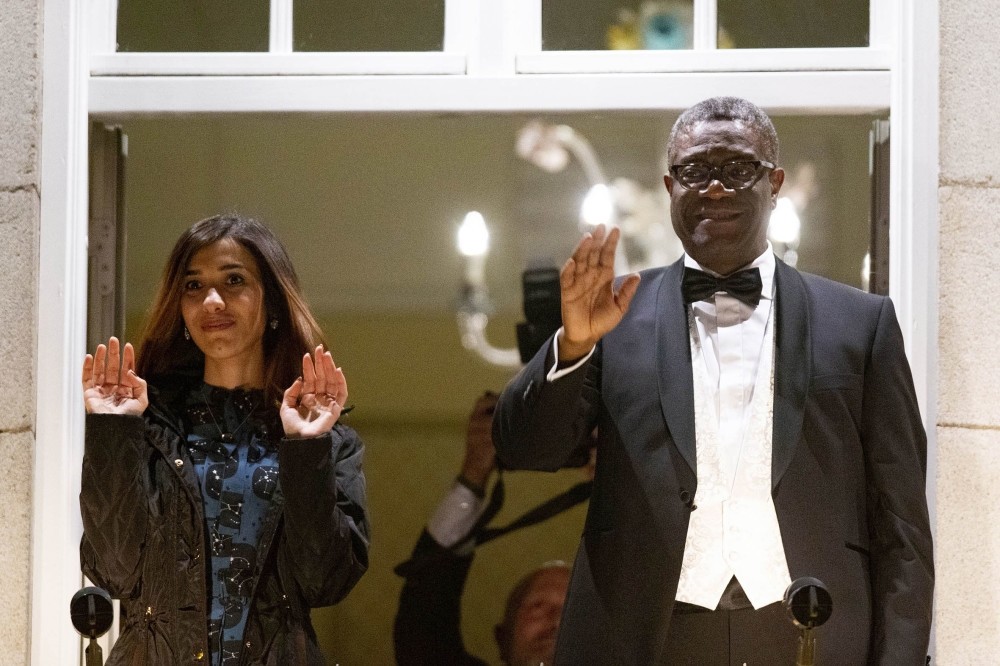 Nobel laureates Denis Mukwege and Nadia Murad called on the world to protect victims of wartime sexual violence in their Peace Prize acceptance speeches on Monday, slamming indifference to the plight of women and children in conflict.

Congolese gynecologist Mukwege, whose work has made him a global expert on rape in conflict, and Yazidi activist Murad, a survivor of Daesh sexual slavery, both said victims were sometimes valued less than commercial interests.

In an emotional ceremony in Oslo, which saw the laureates cheered and given standing ovations, Mukwege and Murad called on the world to do more.

"If there is a war to be waged, it is the war against the indifference which is eating away at our societies," Mukwege said.

His Panzi hospital in the Democratic Republic of Congo's war-torn east has treated the wounds of tens of thousands of women and children after sexual assaults that have become a "new reality" in the country.

The 63-year-old said the violence "shames our common humanity."

In her speech, Murad, 25, implored the global community to help free hundreds of women and girls still held by terrorists, saying the world must protect her people and other vulnerable communities.

"It is my view that all victims deserve a safe haven until justice is done for them," she said. Nobel committee chairwoman Berit Reiss-Andersen said the pair had received the Peace Prize "for their efforts to end the use of sexual violence as a weapon of war and armed conflict."

She described them as "two of the strongest voices in the world today."

They received the Peace Prize gold medals, diplomas and nine million Swedish Krona ($1 million), which they will share.

Mukwege lay much of the blame for the horrific violence unleashed on civilians on those in power in his troubled country.

"For twenty years now, day after day, at Panzi hospital, I have seen the harrowing consequences of the country's gross mismanagement," said the doctor, a critic of DR Congo President Joseph Kabila, who is set to be replaced in elections this month.

Mukwege said the trade in the country's abundant natural resources helped fuel the violence while profits "end up in the pockets of a predatory oligarchy."

"We love nice cars, jewelry and gadgets. I have a smartphone myself. These items contain minerals found in our country. Often mined in inhuman conditions by young children, victims of intimidation and sexual violence," he said.

"It's not just perpetrators of violence who are responsible for their crimes, it is also those who choose to look the other way," Mukwege added, calling for a global fund to provide reparation for victims and economic and political sanctions for those behind the violence.

'Inconceivable' not to act

Murad survived the horrors of captivity under Daesh in seized parts of Iraq and Syria. Older women and men faced summary execution during the Daesh assault, which the United Nations has described as a possible genocide.

Captured in 2014, Murad suffered beatings and gang-rape before she was able to escape. In her Nobel acceptance address Monday, Murad said more than 6,500 women and girls from her community have been kidnapped, raped and traded "in the 21st century, in the age of globalization and human rights." The fate of some 3,000 women and girls is still unknown.

"Young girls at the prime of life are sold, bought, held captive and raped every day. It is inconceivable that the conscience of the leaders of 195 countries around the world is not mobilized to liberate these girls," she said.

"What if they were a commercial deal, an oil field or a shipment of weapons? Most certainly, no efforts would be spared to liberate them."

Murad, whose mother and six of her brothers were killed, said on Sunday that "steps towards justice" had given her some hope.

Murad has been supported in her campaign for justice for Yazidis by Lebanese-British lawyer and rights activist Amal Clooney, who was in the audience in Oslo.

No Daesh terrorists have yet faced trial over the atrocities against the Yazidis.

Murad is the first Iraqi to win the Nobel Peace Prize. She said she was thankful for the honour, but added: "The fact remains that the only prize in the world that can restore our dignity is justice and the prosecution of criminals."