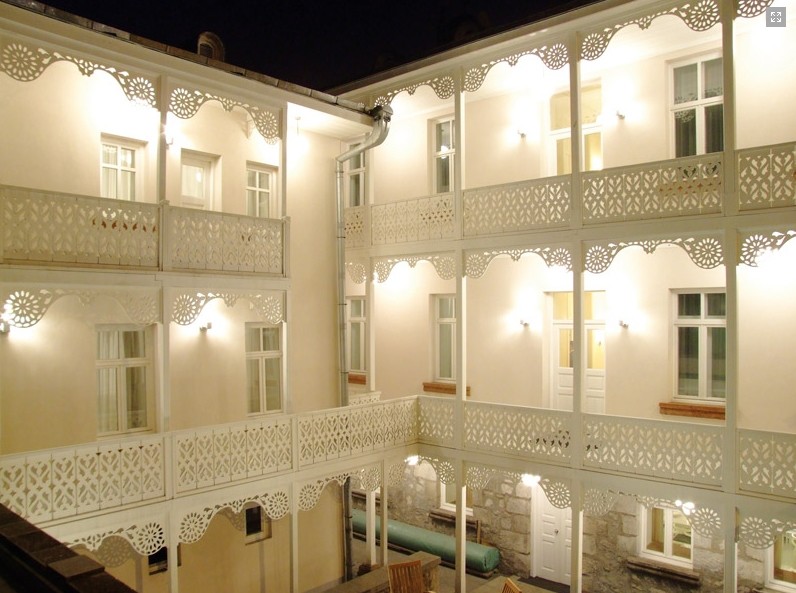 The historical building, which was built in the 1900s in Russian architectural style, was introduced to tourism after being restored in 2005.
by Anadolu Agency Dec 13, 2018 12:00 am

Kars, which has become a frequently visited spot thanks to train tours, offers unique hotel experiences to visitors. The ‘Kar's Hotel' built in a restored 120-year-old Russian building offers eight rooms, each named after a district in the region

A boutique hotel named Kar's, housed in a 120-year-old historical Russian building in Kars province, features rooms named after the districts in the city and contributes to the promotion of the city.

The historical building, which was built in the 1900s in a Russian architectural style, was introduced to tourism after being restored in 2005. The hotel, known as among the best-restored boutique hotels in Turkey, attracts the attention of local and foreign tourists.

The rooms of the hotel are named after Kars' districts: Akyaka, Arpaçay, Digor, Selim, Sarıkamış, Susuz and Kağızman. The suites are named after the Aras River, which rises in the Eastern Anatolia Region, passes through Kars and drains into the Caspian Sea by merging with the Kura River.

The hotel's restaurant is named after the Ani Archaeological Site on the border of Turkey and Armenia, which has hosted 23 civilizations and is on UNESCO's World Heritage List.

The hotel's manager Mehmet Duman told Anadolu Agency (AA) that the building was constructed in the 1900s in line with civilian Russian architecture.

Expressing that the hotel was restored in 2005 for tourism, Duman pointed out that the hotel is one of the best-restored boutique hotels in the country.

He noted that the hotel gets recognition by Turkish and foreign tourists. "It also provided a different awareness of Kars; we receive very positive reactions, especially from our guests. The building was restored in line with the historical structure, remaining faithful to history. We have turned this hotel into a place where we offer comfort and introduce Kars to people," the manager continued.

Explaining that the introduction of the historical building to tourism is an important value for the city, Duman said, "When our local and foreign guests come to the hotel and learn the names of the rooms, they also learn about a district of Kars. And then they start to ask questions to get to know this district. The name of the restaurant is also Ani. This way we created awareness of the city."

Zeliha Koçak, one of the guests at the hotel, mentioned that such a beautiful building has been introduced to tourism. "We experience a different feeling in each room. For example, our son-in-law is from Kağızman in Kars. We entered the room named after this district and remembered memories about him. We remembered that we visited Kars 40 years ago for him. Everyone should come and see this place," she added. Another visitor, Gülcan Bozdemir, said that they came to Kars to visit this must-see city. Bozdemir stated, "It is so good that the rooms of the hotel were named after the city's districts. In this way, the districts are immortalized. For example, there is a room named after Kağızman district. If I stay in this room as a tourist, I will surely be curious about this district and want to see it. I am curious about Susuz, as well. It is a good application for tourists."