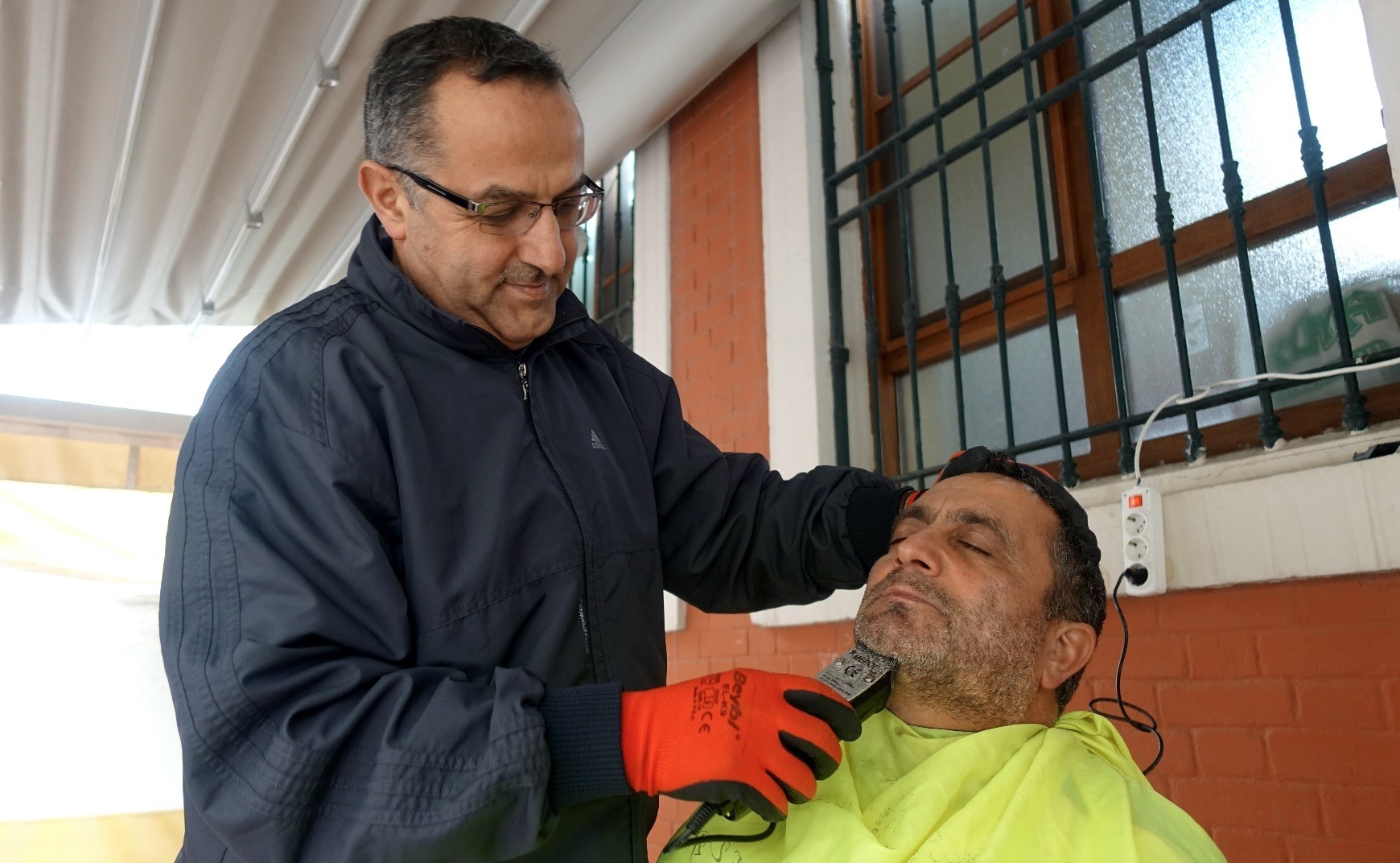 Imam Osman Gu00f6rkem shaves the beard of a homeless man in Selimiye Hatun Mosque in Beyou011flu, Istanbul.
by Anadolu Agency Dec 25, 2018 12:00 am

Working as the imam of Selimiye Hatun Mosque in Istanbul's Beyoğlu district, Osman Görkem gives the homeless a helping hand, meeting their needs and sharing their troubles at the very same time.

The 51-year-old has been serving as an imam for 16 years and says he's been opening up the doors of the mosque to the homeless for quite some time. What's important, Görkem says, is being their friend and accepting their problems like they're his own.

He had a shower built in the basement of the mosque for people who need it. He serves breakfast in front of the mosque every Saturday. Görkem hands out clothes brought by philanthropists to the homeless and also works as a barber when he needs to.

Finding jobs for some homeless people, he saves them by placing them in an apartment with their first salaries. He makes peace between people who are at odds with each other and helps people see their relatives who live far away by buying them bus tickets.

Speaking to Anadolu Agency (AA), Görkem said that he always deals with poor people and occupies himself with the problems of people around Taksim square.

"I feel the need of helping the homeless when I have seen that some of them are wretched. I made a place under the mosque for them to wash up and installed a water heater. The place was narrow but we made use of it. At first, only six to seven people a day came to use the shower. On weekends, this number reaches 20 to 25. Our average number is 40 now. I deal with everything, including cleaning and the organization for the bath," he said.

Mentioning about how he spares his Saturdays for the homeless and starts to prepare for them after mid-afternoon on Friday, he noted, "We offer soup, tea and bagels on Saturday morning. People bring clothes that they do not wear anymore. We give them to the homeless. We prepare everything on Friday and distribute it on Saturday morning. I provide an opportunity to wash, to wear, to eat and drink for people who come here regardless of their religion, language and race. We try to find a job for those who want to work. I let some of them who get a job stay in the mosque until they find a hostel or a flat. We found jobs for 25 people in a year."

Görken stressed that people who live in the streets got used to the mosque by embracing it, and this makes him happy.

Explaining that he gives advice to the homeless on how they can rise to their feet, he stated, "Before the distribution, I speak for five or 10 minutes. The biggest absence of these people is love and care. They are in need of love and care. While you are doing this job, you should love it. Or else, you cannot be successful. Saving one life is like saving all humanity. If we do not do it, who will?"