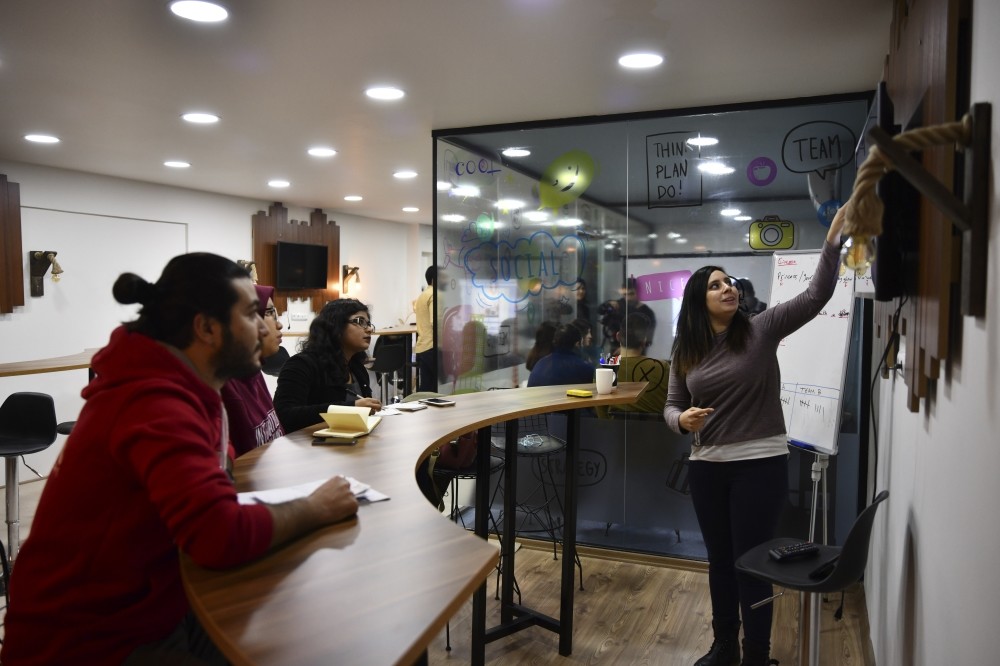 Those who speak English while giving an order at the cafe have the extra discount and they have the opportunity to talk with teachers apart from course hours.
by Anadolu Agency Jan 22, 2019 12:17 am

Entrepreneurs have decided to get the better of difficulties in language learning, and are coming together with their teachers to create an innovative new cafe concept

A group of entrepreneurs in Gaziantep took the problems in language learning into consideration and made their language course address more than 100 people in less than two months with a cafe concept.

Drawing attention as a cafe when looked at from outside, the cafe, opened on Nişantaşı Street where there are many cafes in the city, is actually a language course. However, in this course, people study on cocktail tables, going beyond the ordinary. Those who speak English while giving an order in the cafe get a discount and they have an opportunity to talk with teachers outside course hours.

told Anadolu Agency (AA) that they have established a solution that will end the language problems that they had from their own experience. Noting that ordinary language courses spend so much time on grammar rules but their course presents an opportunity to practice and to socialize along with grammar education, Arı said, "A person who completes an English course is shy when speaking no matter how she/he wants to speak English. The easiest way to overcome this is to establish dialogues with people at the same level. In our course, we provide the necessary grammar education and then encourage our students to speak English with each other. We give a discount of 25 percent to whoever can order in English in this context. Young people spend a lot of time in the cafe. We wanted them to learn English while spending their time here."

The education coordinator of the institution, Emine Çarnacar explained that they started dreaming of a new generation of education courses and conducted this project. They determined an ideal location where young people want to spend time.

Stressing that they are on the right track, Çarnacar mentioned, "We brought the foreign experience to our students. When you enter through this course's door, English conversations and games welcome you. You do not receive English as only a language but you are exposed to it. We have had a lot of positive feedback."

Armin Van Dyk, one of the coordinators of the language course, reported that they managed to draw the attention of young people with a different concept.

Stating that learning a language is fun but people have a fear of it due to wrong methods, Dyk said, "The traditional perception on foreign language learning needs to be changed. People are scared of thick books and leave their courses unfinished. We turned the course into something more enjoyable. We do not finish with a grammar course. We play games with our students and chat with them while drinking coffee."

Fouad Shabek of Egyptian origin, the founding father of the language course, remarked that he has been teaching English in Gaziantep for two years. "The students who come here really want to speak English. Foreign teachers make this easier," he said. Shabek highlighted that they reached 100 students in two months and they expect this number will increase a lot in the upcoming period.

Oğuz Özvarlık, one of the students of the school, emphasized that he registered when he learned the mission and vision of the school is different.

He reported, "We go and receive English courses for years. However, we learn the spirit of English learning here. English is not only written on the board, we live it here."