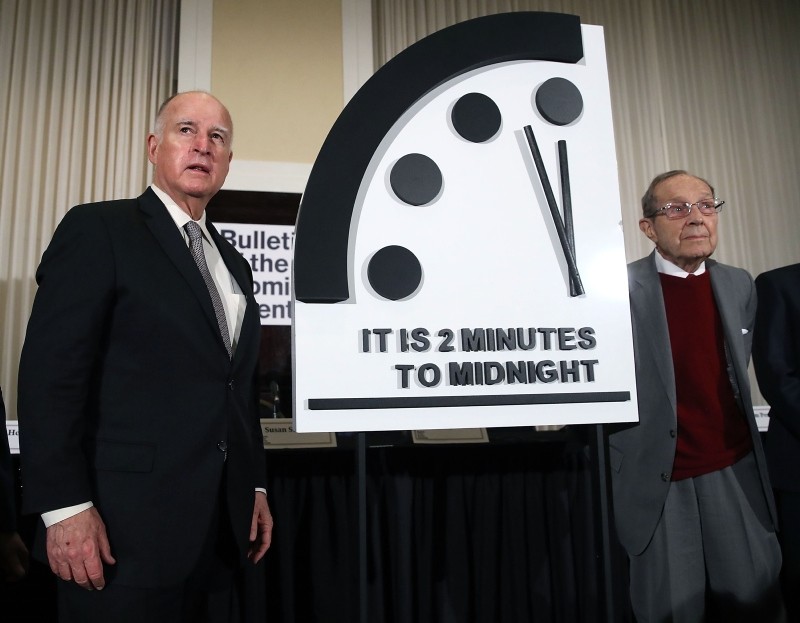 A renewed nuclear arms race, rising greenhouse gas emissions and the emergence of state-sponsored disinformation campaigns have left the modern world as close to annihilation as it was at the height of the Cold War, atomic scientists said on Thursday.

The Doomsday Clock, created by the Bulletin of the Atomic Scientists as an indicator of the world's susceptibility to apocalypse, remained at two minutes to midnight for a second year running in what the scientists called a dangerous "new abnormal."

"Though unchanged from 2018, this setting should be taken not as a sign of stability but as a stark warning to leaders and citizens around the world," the Chicago-based group said in a statement.

Humanity's two simultaneous existential threats of nuclear war and climate change were exacerbated during the past year by the "increased use of information warfare to undermine democracy around the world," the group said.

"In many forums, including particularly social media, nationalist leaders and their surrogates lied shamelessly, insisting that their lies were truth, and the truth 'fake news,'" it said.

Since the election of U.S. President Donald Trump in 2016, the clock has closed in on midnight in successive 30-second moves in 2017 and 2018, in part because of escalating tensions with North Korea over its nuclear program.

The last time the clock was as close to midnight as it has been in the past two years was in 1953, when the U.S.-Soviet arms race escalated as Moscow tested a hydrogen bomb in August after the detonation of an American H-bomb the previous November.

Despite a softening of barbed rhetoric between Trump and North Korean leader Kim Jong Un over the past year, the group saw rising threats in nuclear-armed nations' programs of "'nuclear modernization' that are all but indistinguishable from a worldwide arms race."

On climate, the group said carbon dioxide emissions resumed an upward climb in the past two years.

To turn back the clock, it recommended steps including fortifying and extending U.S.-Russian nuclear treaties with limits on modernization programs, adopting safeguards to prevent peacetime military incidents along NATO countries' borders, citizen demands for action on climate change and multilateral talks to discourage the misuse of information technology.

The bulletin was founded by scientists who helped develop the United States' first atomic weapons. When the clock was created in 1947, it was set at seven minutes to midnight.