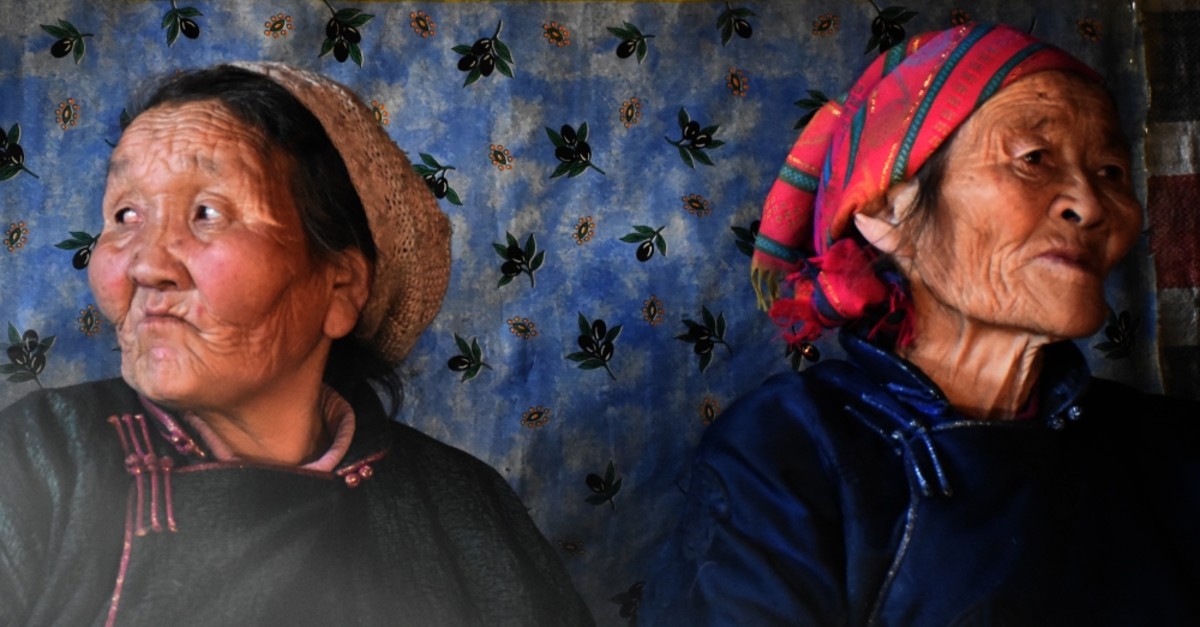 Two elderly Dukha Turks in their traditional clothing.
by Anadolu Agency Mar 26, 2019 12:09 am

In the northernmost part of Mongolia, a handful Turks in the middle of desolation in southern Siberia lead an isolated life. The Dukha people, whose numbers are only 800 in Mongolia, which is two times greater than in Turkey, dwell with their deer herds in one of the most sparsely populated places in the world.

The Dukha Turks, who live in one of the most remote areas in the world, can only be reached after a challenging journey by airplane, car, horseback or on foot.

In order to get to these people's land, where the air temperature drops to minus 50 degrees Celsius in the winter, you need to pass through snow-covered forests, barren steppes and icy lakes.

The Dukha people live in the northern part of Mongolia's coldest and most mountainous area featuring taiga forests near the Russian border. Accepting difficult living conditions and journeys as ordinary life conditions for themselves, they are the ones that sustain the Turkish language and culture together with the Kazakh, Tuva and Khoton tribes in Mongolia.

They are called "tsaatan," which means "deer shepherds," by the Mongols as they feed the herds of reindeer. It is estimated that the number of people in this Turkic community is only about 800 in Mongolia. To see the Dukha people, you need to reach the taiga, which is 8,000 kilometers away from Turkey. For this, you will go to the north of Tsagaannuur district, which is on the north of Lake Khövsgöl, one of the largest lakes in Asia. The Dukhans, who used to live in tents which were formerly made up of wool fabric and animal hide, live in log houses now. In summer, they go into tents again. The inside of these log houses, which are not sufficient to protect against the winter cold, are covered with materials such as canvases, linoleum and carpets for isolation. The stove in the middle of the one-room house is the only heat source.

The deer mean life for the Dukha Turks. Feeding the herds of reindeer, they have survived for a very long time thanks to these animals. Meat, milk, skin, wool, horns, everything of the deer, is basic food and a means of living. They use all parts of the deer to sustain their lives. These people believe in shamanism. People living in the taiga organize rituals according to the position of the sun, moon or important natural events or during a serious illness. In these rituals, they believe that they dismiss the evil spirits in their own way to get rid of the hardships by contacting some spirits.

The technology spreading everywhere in the world has quickly reached the desolate Dukha Turks. Until recently, they led a life closed to the outside world, away from technology. However, they have solar panels to produce electricity, satellite antennas, televisions and phones now. Some families even have their own vehicles.

The Dukha culture and its traditional lifestyles have begun to change or disappear, especially in the younger generations. While the elderly in the Dukha community can speak their language along with Mongolian, some young people do not know the Dukha language.

The Turkish that Dukha Turks speak shows similarities with the Turkish spoken in Turkey and Central Asia. Even though people in Turkey would have difficulty understanding the Dukha people, communication can be accomplished through many common or shared words.