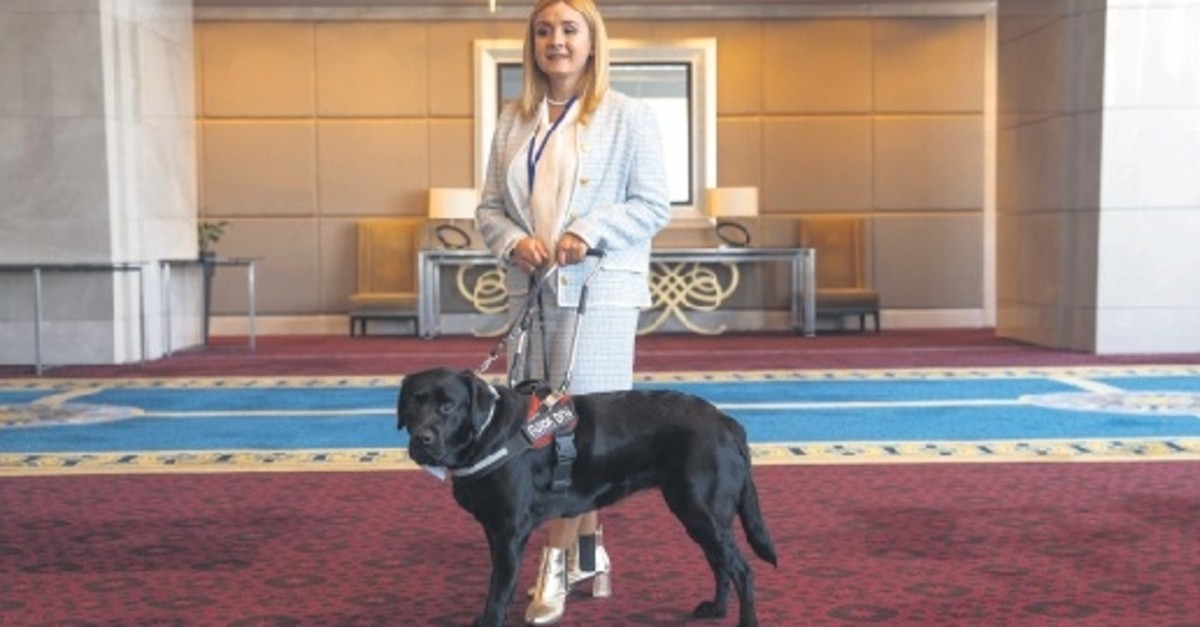 Founded in 2014, the Guide Dog Association aims to change the lives of the visually impaired with the help of guide dogs, a relatively new concept in Turkey. However, the association is now undertaking another ambitious mission - therapy dogs

Can a dog change a person's life? Lawyer Nurdeniz Tunçer believes it can, and in 2014 she founded Turkey's first ever guide dog training foundation, the Guide Dogs Association, together with Maggie Moore, the wife of former U.K. envoy to Ankara, Richard Moore.

Nurdeniz Tunçer is visually impaired, and decided that her disability can't run her life. Despite the obstacles, she faced throughout her life, after graduating from Istanbul University Law School in 2001, she started a law office that focuses on business and contract law. However, her own experience encouraged her to devote more time and energy to uphold and fight for disability rights in Turkey.

As the president of this association, Tunçer also works to advance the legal status and standard of living for the visually impaired in Turkey, providing them with employment and improved educational opportunities.

For the last five years, she has been working to raise awareness to the importance of guide dogs for the blind and encourages people to help them train more dogs every year in order to touch more people's lives.

Guide dogs are usually chosen from among certain breeds that are known to be more meek and friendly to humans. The trainers of the association first examine the dogs to determine whether they are obedient and healthy. Once they pass the test, the dogs undergo a year of training. Following the training, the guide dog candidates are given tests and if they pass successfully, the dogs are trained to accompany visually impaired people for up to six months.

Training a guide dog is a challenging task and Tunçer's guide dog Kara - meaning "Black" in English follows her everywhere, obeying her every command. Kara is fully dedicated to the task but Tunçer wants to set the bar higher and has started training therapy dogs for children with psychological conditions, especially those with autism.

We sat down with Tunçer and therapy dog trainer Ken from Ireland who helps the Guide Dog Association train new dogs as well as other young trainers in Turkey.

Joined by Kara, Tunçer's guide dog and Kaymak, a newly trained therapy dog, during the interview, I had a chance to observe the dogs' behavior and found it extraordinary how well behaved they are. The dogs are certainly obedient and even avoid impulsive responses to the things that are going on around them. I asked Tunçer if she has any trouble while using public transportation or walking around in public places as many people are afraid of dogs but she said people are actually kinder to her after learning that Kara is a guide dog.

Then I turned to Ken, who is currently training a Turkish guide dog trainer in order to expand the program. He informed that the first guide dogs were used during World War II in Germany and the program has helped thousands of visually impaired people around the world. However, the program has a single flaw. The guide dogs start training when they are the only a couple of months old but after months of training, some of them do not make the cut.

"Up to 60 percent of the dogs that start training is eliminated as the nature of the job is quite delicate. Usually, these dogs are sold as pet dogs and all the training goes in vain. Yet, in the last decade, these dogs are increasingly being used as therapy dogs and they have proved to have a positive effect on children with autism," Ken continued.

Autistic children have difficulty making the social connection that varies according to their autism spectrum. Some children don't have any communication with the others neither visual nor verbal. Ken said that when a therapy dog is placed with autistic children, the dog makes eye contact just like humans do.

"The dog senses the difference in children. One of the children I worked with did not want the dog to touch him but when the dog continued to give its paw to him, he eventually accepted and suddenly cuddled the dog, which made his family burst into tears as this contact was his first contact with any living thing," he added.

Although the selection of therapy dogs is different from guide dogs, their training is almost the same. When a puppy does not make the cut for a guide dog, it continues its training as a therapy dog. Once the training is over, the association finds a family who needs this cute puppy's help. When a therapy dog is placed with a family, the trainer of the dog teaches them how to interact with the dog, how to feed and walk it as well as how to groom it and play with it. "It is all about the fun," Ken said, talking about the adaptation period.

However, there are certain things that a therapy dog trainer, as well as the Guide Dog Association, expects from the family.

First of all, therapy dogs are home dogs. They are social beasts which mean they cannot be alone at home for more than three or four hours. It needs to be walked at least 30 minutes a day and it is advisable to take the dog to crowded places in order for it to adjust to any circumstances. Once a dog is placed with a family whether it is a therapy dog or a guide dog the association and its trainer pay a visit to the family once a year to see how they are doing.

Ken said they are usually good with their choices and so far they have not had to take a dog away from any family. He also pointed out that all disabled whether mentally or physically children are able to work with a therapy dog.

However, he underlined a very crucial thing: "It is up to the dog whether it wants to be a therapy dog or not. The guide dogs are trained to guide the blind but the therapy dog needs to be willing to accompany the disabled."