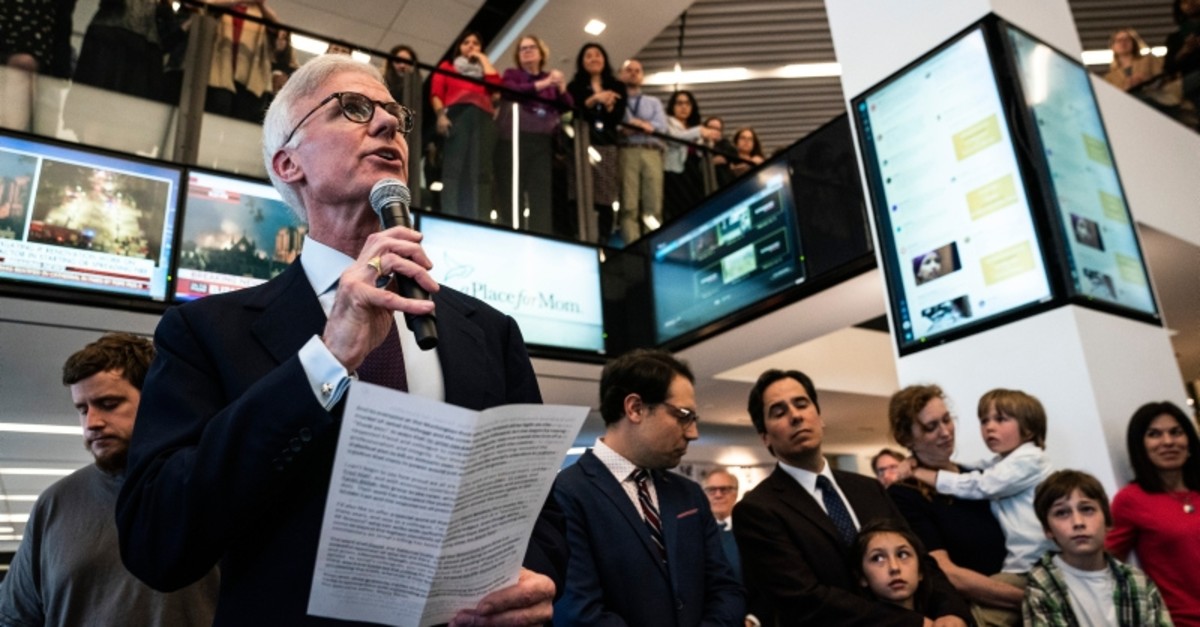 Washington Post publisher Fred Ryan speaks during a 2019 Pulitzer Prize announcement ceremony in the newsroom at the Washington Post office in Washington on Monday, April 15, 2019. (AP Photo)
by Apr 16, 2019 10:12 am

The New York Times and The Wall Street Journal were awarded Pulitzer Prizes on Monday for their separate investigations of President Donald Trump and his family.

The Times won the prestigious journalism award for explanatory reporting for its probe of the Trump family's finances that "debunked his claims of self-made wealth and revealed a business empire riddled with tax dodges," the Pulitzer Prize Board announced during a ceremony at New York's Columbia University.

Coverage of Trump's secret hush money payments to two women during his 2016 presidential campaign who claimed to have had affairs with him earned the Journal a national reporting nod.

The South Florida Sun Sentinel won the Pulitzer for public service for its coverage of failings by school and law enforcement officials before and after the February 2018 massacre at Marjory Stoneman Douglas High School.

In the breaking news category, the Pittsburgh Post-Gazette was honored for its coverage of the October 2018 shooting at a synagogue in the city that left 11 people dead.

Hannah Dreier of ProPublica won the prize for feature writing for a series of stories about immigrants from El Salvador living on New York's Long Island caught up in a crackdown on MS-13 gang members.

The Associated Press won a Pulitzer for international reporting for its coverage of the war in Yemen.

Reuters was honored for international reporting for its coverage of atrocities committed against Rohingya Muslims in Myanmar.

Reuters also won in the breaking news photography category for pictures of migrants travelling to the United States from Central America.

In other categories, "The Overstory" by Richard Powers won the Pulitzer for fiction and "Fairview" by Jackie Sibblies Drury won the prize for drama.

The Pulitzer for history was awarded to David Blight for "Frederick Douglass: Prophet of Freedom" while the biography prize went to Jeffrey Stewart for "The New Negro: The Life of Alain Locke."

The poetry prize was won by Forrest Gander for "Be With."

In general non-fiction, the prize went to Eliza Griswold for "Amity and Prosperity: One Family and the Fracturing of America."

The music award went to Ellen Reid for her operatic work "p r i s m."

Special citations were awarded to soul legend Aretha Franklin for her contributions to music and to the staff of the Capital Gazette newspaper of Annapolis, Maryland, which lost five employees in a June 2018 shooting.