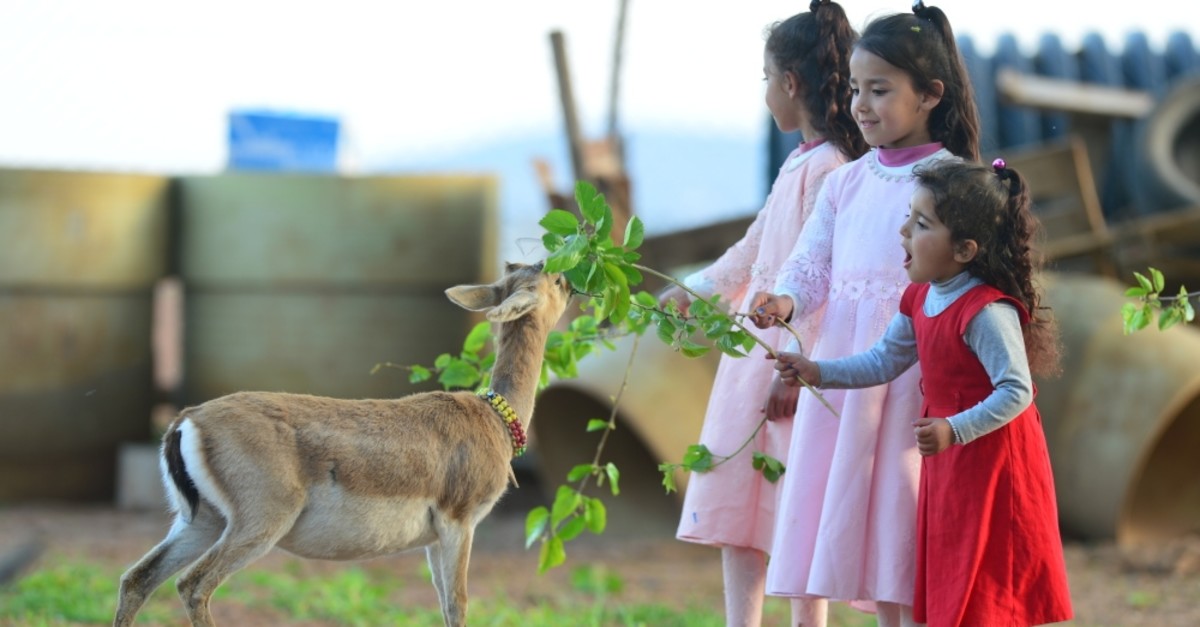 The daughters of Fevzi Felhan feed one of the gazelles living in their garden.
by Anadolu Agency May 03, 2019 12:28 am

People's love for animals manifests itself in many ways but for Şanlıurfa resident Fevzi Felhan, it means opening up his home to endangered gazelles.

Gazelles have been on the list of endangered animals for some time now, but they are still living in the outskirts of southeastern city of Şanlıurfa. In the past, it was reported that the gazelles were living in droves in Şanlıurfa but now as their numbers decrease rapidly, they are protected by the General Directorate of National Parks. Known for their timid, delicate nature, gazelles are still symbols of Şanlıurfa and continue to be the apples of the eyes of the locals.

Felhan, who is a civil servant in the city, has always been interested in nature. After moving to Şanlıurfa, Felhan started taking an interest in the gazelles and decided to make a special place in the huge garden of his house just for the endangered animals.

He adopted two gazelles 17 years ago from the Gazelle Reproduction Center in Şanlıurfa and started taking care of them in the garden. In time, the number of gazelles reached 10, and his garden has become one of the centers of attraction for tourists visiting the city. Felhan also puts gazelles up for adoption when their numbers increase to more than he can care for.

Speaking to an Anadolu Agency (AA) correspondent, Felhan said the gazelles are always around him and added: "It is hard to see these gazelles in nature. Since they are shy, not many people can enjoy their company. We adopted twin gazelles back in the day just to be able to care for them and now, their numbers are increasing. They are a part of our family. Each one of them is dear to my heart."

Felhan also said gazelles are wild animals, but they are now accustomed to people walking around them.

Yüsra Felhan, Fevzi Felhan's 11-year-old daughter, said the first thing she does after coming home from school is feed the gazelles.

"I am happy to be around them. I feed them with milk in bottles. I want to spend as much time with them as possible," she said.

Yüsra's 7-years-old sister, Ravza, is also crazy about the gazelles. Stating that they are her best friends, Ravza said: "I feed them and give them water. I sometimes bring them plants to eat as well."