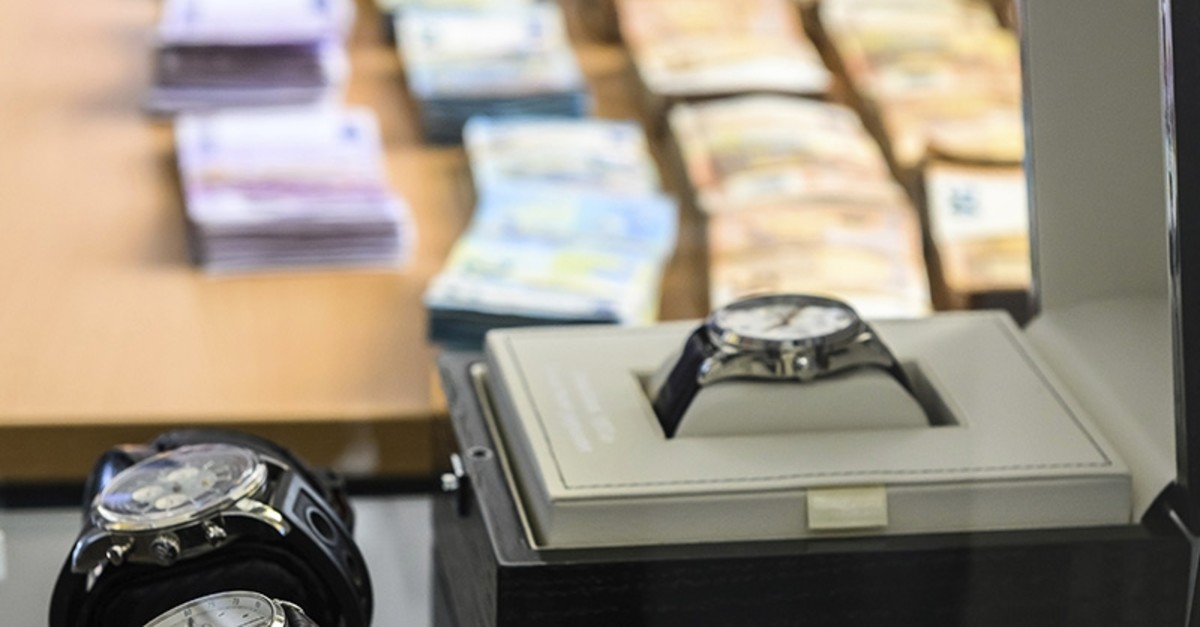 Pieces of evidence like banknotes and luxury watches are presented on Friday, May 3, 2019 at a press conference in Wiesbaden, Germany (AP Photo)
by Associated Press May 03, 2019 5:46 pm

European and American investigators have broken up one of the world's largest online criminal trafficking operations in a series of raids in the United States and Germany, authorities said Friday.

Three German men, ages 31, 22 and 29, were arrested after the raids in three southern states on allegations they operated the so-called the "Wall Street Market" darknet platform, which hosted some 5,400 sellers and 1.15 million customer accounts, Frankfurt prosecutor Georg Ungefuk told reporters in Wiesbaden.

The men, whose names weren't released as the ongoing investigation is ongoing, face drug charges in Germany on allegations they administrated the platform where cocaine, heroin and other drugs, as well as forged documents and other illegal materials, were sold.

They have also been charged in the United States, said Ryan White, a prosecutor with the U.S. Attorney's Office in Los Angeles, who traveled to Germany for the announcement along with FBI and DEA agents.

"The charges filed in Germany and the United States will significantly disrupt the illegal sale of drugs on the darknet," White told reporters.

Ungefuk said Wall Street Market was at least the second biggest, refusing to name others for fear of jeopardizing other investigations.

In the nearly two-year operation that involved European police agency Europol and authorities in the Netherlands as well as the U.S. and Germany, investigators pinpointed the three men as administrators of the platform on the darknet, a part of the internet often used by criminals that is hosted within an encrypted network and accessible only through anonymity-providing tools, such as the Tor browser.

Transactions were conducted using cryptocurrencies, and the suspects took a commission of between 2% and 6%, Ungefuk said.

The site trafficked documents such as identity papers and drivers' licenses but an estimated 60% or more of the business was drug-related, he said.

Authorities swept in quickly after the platform was switched into a "maintenance mode" on April 23, and the suspects allegedly began to transfer customers' payments to themselves in a so-called "exit scam," Ungefuk said.

The raids culminated Thursday with the seizure of servers, while federal police confiscated 550,000 euros ($615,000) in cash, both Bitcoin and Monero cryptocurrencies, hard drives, and other evidence in multiple raids.

In Los Angeles, two drug suppliers were arrested and authorities confiscated some $1 million cash, weapons and drugs in raids. White did not release their names but characterized them as "major drug traffickers" who were dealing methamphetamine and fentanyl.

Because of the clandestine nature of the operation and the difficulty of tracing cryptocurrencies, Ungefuk said it was difficult to assess the overall volume of business conducted but that "we're talking about profits in the millions at least."

Since the investigation into the customers and sellers on the platform is ongoing, authorities were not releasing further details on the suspects.

"The individuals who operated it were based in Europe, there were many vendors and customers based in the United States," White said. "Some of these people have already been prosecuted and some prosecutions are to come."