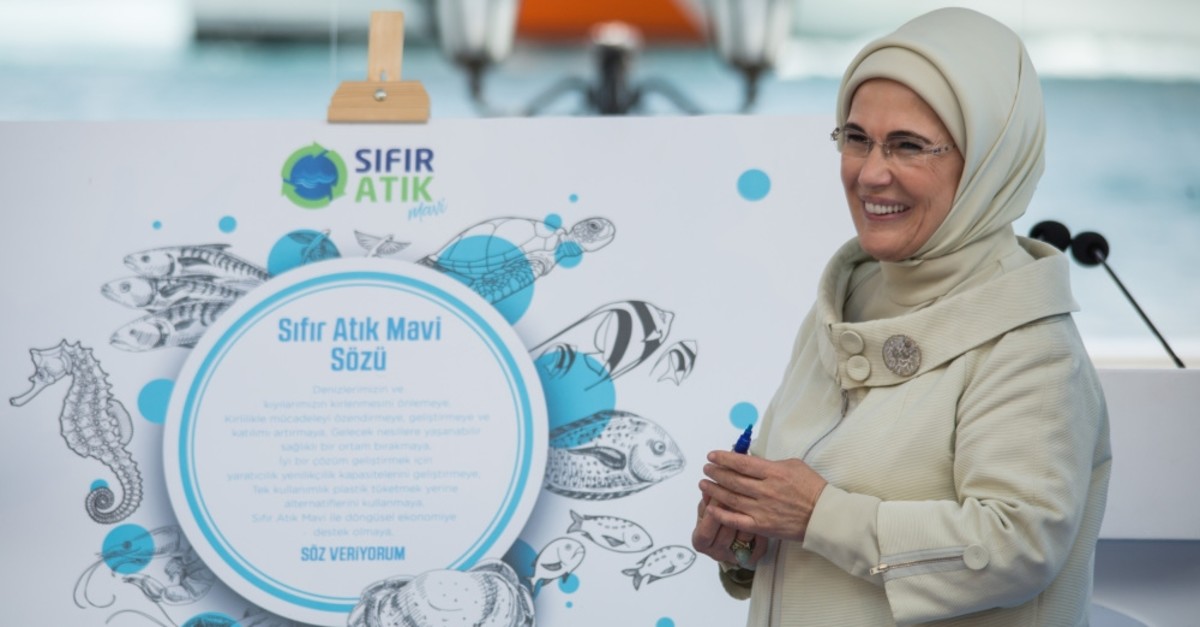 Did you know that the seas provide one out of every two breaths we take? Our seas produce 50 to 70 percent of the oxygen we need to survive. In other words, we owe one breath to the forests on land and the other to the blue meadows and plankton under the sea. For that reason, under the auspices of first lady Emine Erdoğan, a new project will be carried out by the Ministry of Environment and Urbanization within the scope of the zero waste movement. The Zero Waste Blue project, as it is being called, was initiated by the first lady on June 10 with the cooperation of the DenizTemiz Association/TURMEPA to support the protection of our seas. An awareness event was organized at Beşiktaş Ziya Kalkavan Vocational and Technical Anatolian High School to ensure that the zero waste movement spreads throughout the country and to draw attention to the importance of protecting the seas. Within the context of this event, a series of awareness activities were conducted. In the early morning hours, divers, including record-holder Şahika Ercüment, collected garbage from the sea and later that day, various workshops were held in a festival-like atmosphere.

Talking about the project, Ercüment said, "In 2050, they say the number of pieces of plastic in the sea and the number of fish will be the same. Today is a very important day because there is now a group working hard to prevent this. The first steps will be taken here. There will be works as part of the project all year round. The sea is my home. I think sea creatures are struggling with plastic. Some creatures are endangered, and the reason is the plastic waste we throw away. We should reduce consumption and avoid disposable plastic waste." Besides, Emine Erdoğan, Environment and Urbanization Minister Murat Kurum and DenizTemiz Association/TURMEPA Chairman Şadan Kaptanoğlu gave speeches at the opening ceremony of the project. Erdoğan stressed, "Our seas have become garbage dumps. The waste in the seas does not stay in one place. It can travel to the farthest points. Scientists have even found plastic in the Arctic region." Noting that some animals face extinction because of our waste, Erdoğan continued, "The environmental crisis needs an integrative perspective. Every life form that we erase from the world prepares our existence for the same end. Waste not only pollutes the seas but also becomes a part of the food chain. That means we eat micro plastics when consume seafood. This situation threatens our health."

The first lady emphasized that stopping the use of plastics is not enough.

"When we focus on the center of the problem, we see excessive production and unconscious consumption. This reveals how education is important. Therefore, we will continue to educate our children and youth through awareness," she added.

Pointing out that schools will start summer break soon, Erdoğan warned, "The holiday season has arrived. Most of our citizens will go to their summer houses. I want to call out to all of them. We should be sure to clean the beaches and coasts. We should not forget that the garbage that we leave behind threatens the health of our society."

Minister Kurum also stated, "Under the context of the zero waste project, we expect to save TL 20 billion annually and provide direct employment for 100,000 people."

After the speeches, Erdoğan, Kurum and Kaptanoğlu signed the Zero Waste Blue promise. In the promise, they assured that they would prevent the pollution of our seas; encourage participation in the fight against pollution; leave a livable, healthy environment for the next generations; use alternatives instead of consuming plastics; and support the cyclical economy with the Zero Waste Blue project. Throughout the summer, the zero waste campaign will initiate cleanup efforts on coasts and in water resources throughout the country, and everyone will be invited to participate in this campaign.