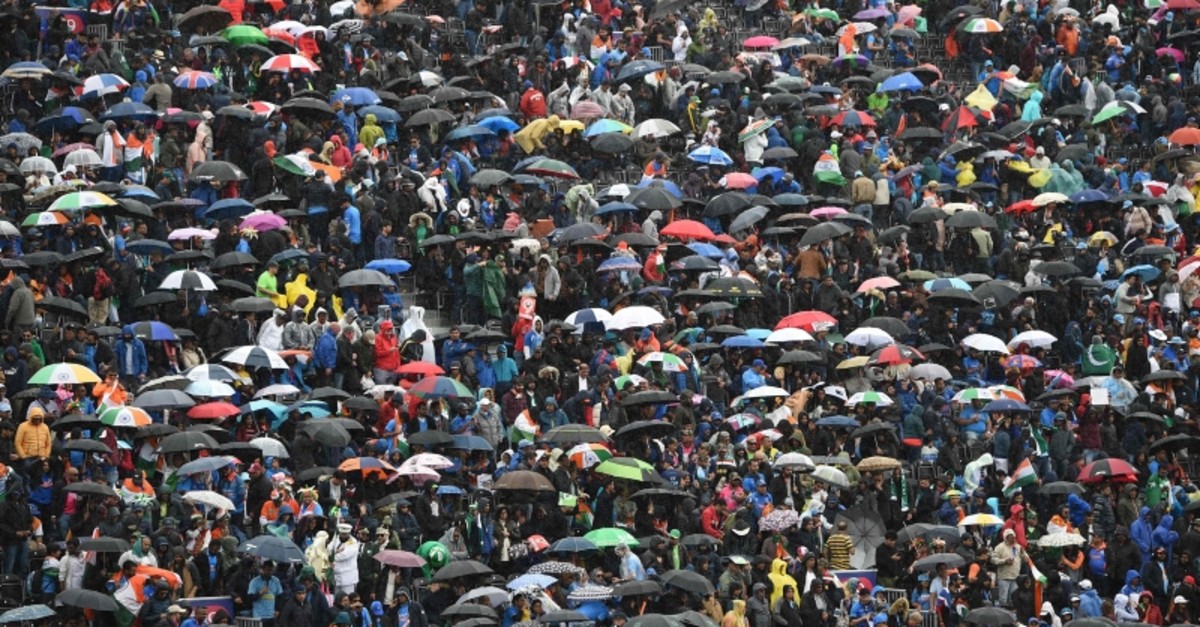 Umbrellas are up in the crowd as rain stops play during the 2019 Cricket World Cup group stage match between India and Pakistan at Old Trafford in Manchester, north-west England, on June 16, 2019. (AFP Photo)
by Compiled from Wire Services Jun 18, 2019 4:01 pm

The world's population is getting older and growing at a slower pace but is still expected to increase from 7.7 billion currently to 9.7 billion in 2050, the United Nations said Monday.

The U.N. Department of Economic and Social Affairs' Population Division said in a new report that world population could reach its peak of nearly 11 billion around the end of the century.

But Population Division Director John Wilmoth cautioned that because 2100 is many decades away this outcome "is not certain, and in the end the peak could come earlier or later, at a lower or higher level of total population."

The study paints a picture of a future in which a handful of countries see their populaces surge as life expectancy lengthens while the global growth rate slows amid declining fertility rates.

By 2050, more than half of the world's population growth will be concentrated in just nine countries: India, Nigeria, Pakistan, the Democratic Republic of Congo, Ethiopia, Tanzania, Indonesia, Egypt and the United States.

Undersecretary-General for Economic and Social Affairs Lu Zhenmin said in a statement: "Many of the fastest growing populations are in the poorest countries, where population growth brings additional challenges in the effort to eradicate poverty," promote gender equality and improve health care and education.

The report confirmed that the world's population is growing older due to increasing life expectancy and falling fertility levels.

All told, 27 countries or territories have experienced a reduction of at least 1% in the size of their populations since 2010 due to low levels of fertility.

The report also says deaths are outpacing new births in Belarus, Estonia, Germany, Hungary, Italy, Japan, Russia, Serbia and Ukraine, but that population loss will be offset by an inflow of migrants.

That's close to the minimum of 2.1 births needed to ensure the replacement of generations and avoid long-term population decline in the absence of migration, according to the United Nations.

Wilmoth stressed that multiple factors lead to lower fertility including increasing education and employment, especially for women, and more jobs in urban than rural areas, which motivate people away from costly large families to smaller families.

But to achieve this, he said, people also need access to modern methods of contraception.

According to the "World Population Prospects 2019: Highlights" report, migration is also a major component of population growth or loss in some countries.

Between 2010 and 2020, it said 14 countries or areas will see a net inflow of more than one million migrants while 10 countries will experience a similar loss.

For example, some of the largest outflows of people — including from Bangladesh, Mepal and the Philippines — are driven by the demand for migrant workers, the report said. But some migrants are driven from their home countries by violence, insecurity and conflict, including from Myanmar, Syria and Venezuela.

The report also projects growing life expectancy generally, including in poor countries where it is now seven years less than the global average.