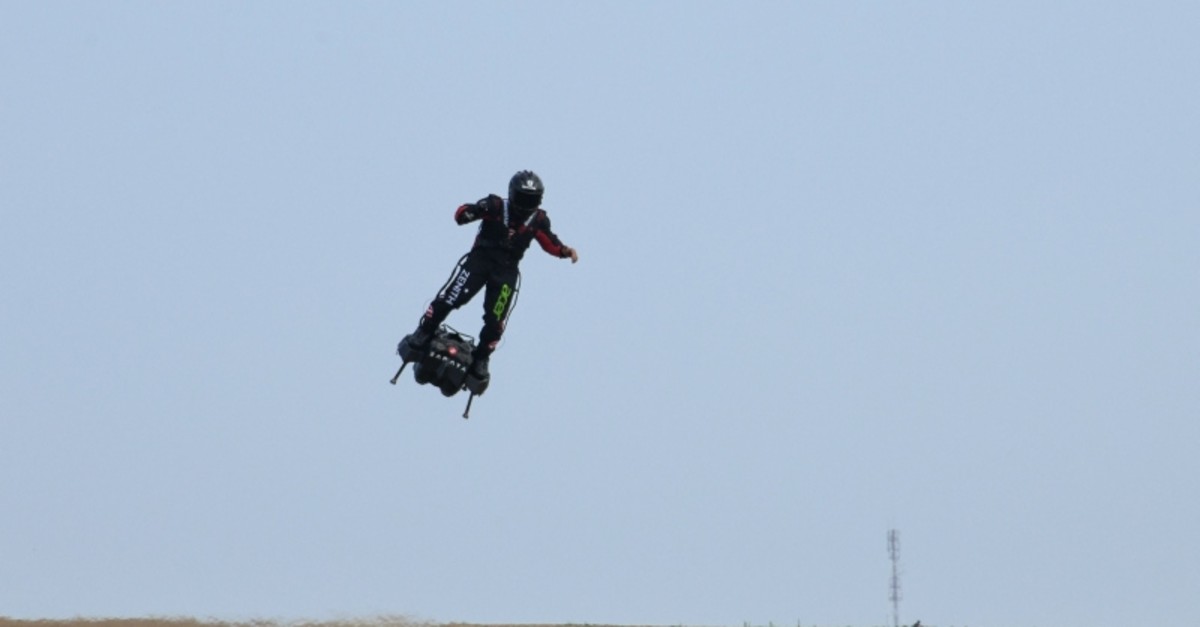 Zapata CEO Franky Zapata flies over fields on his jet-powered hoverboard or ,Flyboard, during a test flight in Saint-Inglevert, northern France, on July 24, 2019 (AFP Photo)
by Jul 24, 2019 5:17 pm

A daredevil French inventor said Wednesday he was ready to realize his dream of flying between France and Britain across the Channel on a jet-powered "flyboard" after finally overcoming bureaucratic obstacles.

Franky Zapata, a former jet-skiing champion, aims to soar above the Channel "like a bird" on Thursday morning in a scene likely to resemble a science fiction film.

In a tribute to past aviation heroes, the 40-year-old has picked the day that marks 110 years since pioneer Louis Bleriot made the first airplane flight across the Channel on July 25, 1909.

Zapata plans to take off from Sangatte on the northern French coast just outside Calais, make the 35 kilometer (22 miles) crossing in 20 minutes, and land in Britain around Dover in a location that has yet to be disclosed.

His plan hit choppy waters initially as the French maritime authorities refused to give the project their benediction -- while stopping short of an outright ban -- due to busy shipping traffic in the Channel.

But the maritime authorities said they lifted their "unfavorable opinion" after receiving guarantees from Zapata about his refueling plans and safety.

"I feel good. The hardest thing for me was the authorizations," Zapata said Wednesday at a news conference in Saint-Inglevert outside Calais. "It was a lot of stress"

The flamboyant native of Marseille, southern France, said "the wind could cause issues" but added that he could refuel twice if conditions were really poor.

"We created a new way of flying. We don't use wings. You are like a bird, it is your body that is flying. It is a boyhood dream."

"This simple dream has become true and tomorrow (Thursday) we will fly from one country to another," he vowed.

Zapata sprung to national prominence at the July 14 Bastille Day military parade when he soared above the Place de la Concorde in Paris in front of world leaders including President Emmanuel Macron.

He carried a rifle during that demonstration and the French defense ministry said it was studying how the flyboard could be used by its troops.

Zapata has said he is ready to work with the armed forces, but insists the main point of the device is to revolutionize travel for civilians.

He also has plans to develop a flying car.

Zapata's flyboard, which is about the size of a skateboard, is powered by five small jet engines that allow the rider to fly at speeds of 190 kilometres an hour (118 mph).

It is fueled by kerosene stored in the rider's backpack and Zapata will carry 47 kilos (104 pounds) of it on Thursday.

If all goes to plan, he will make one refuelling stop on a boat in mid-channel to pick up a second pack of kerosene.

The device is controlled by a handheld throttle, which Zapata activates to take off after strapping himself into a pair of boots attached to the board.

Features include "auto-hover mode" and "quick release boots" in case of an emergency landing on water, according to Zapata's website.

One of the latest was Austrian skydiver Felix Baumgartner, who went on to jump from the edge of space in 2012.

He glided from England to France in 2003 wearing an aerodynamic suit fitted with a six-foot carbon-fibre wing.