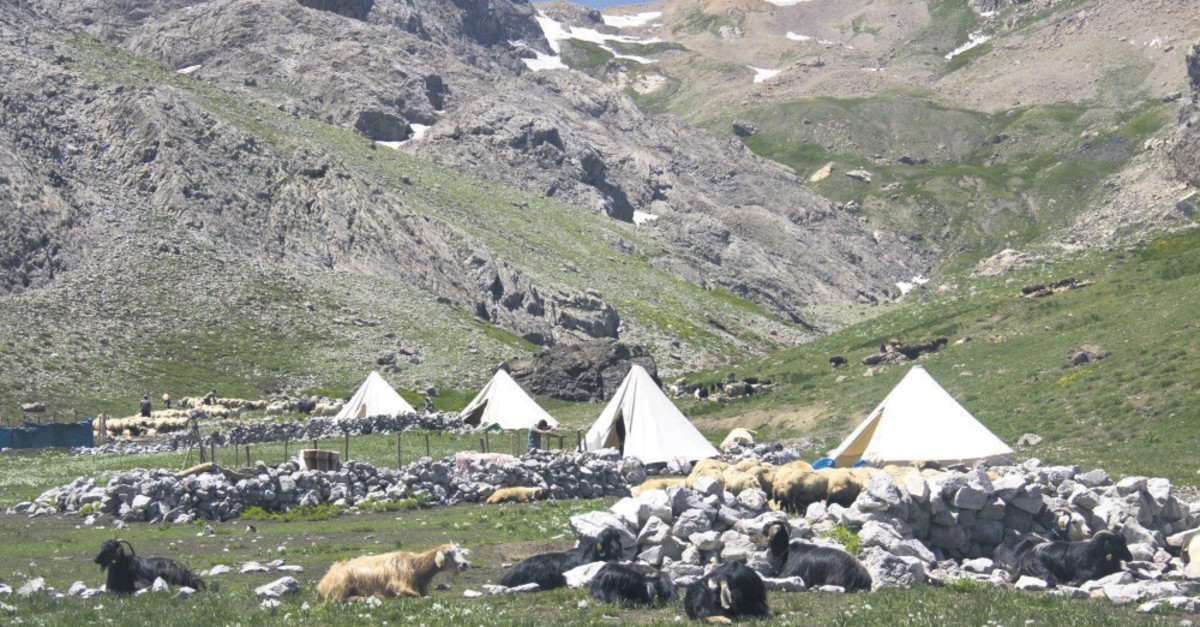 Nomads set up their tents on the challenging highlands and keep guard with Kangal dogs to protect cattle against dangers.
by Anadolu Agency Jul 31, 2019 12:15 am

As the weather heats up in the eastern and southeastern Anatolia regions, nomads heading to the highlands in Tunceli province are struggling with challenging living conditions. The town of Ovacık, where livestock is common due to its wide pastures and plateaus, is home to about 50 nomadic families and their 23,000 small cattle from the surrounding provinces and districts.

Nomads coming from Tunceli's Çemişgezek, Mazgirt, Pülümür and Hozat districts and Şanlıurfa's Siverek district to graze their cattle and heading to the highlands in Ovacık in the summer are struggling with challenging natural conditions to make a living from their livestock.

Setting out on horseback toward the Munzur and Mercan mountains and reaching Işıkvuran, Yalmanlar, Ziyaret, Mercan and Eğripınar plateaus at an altitude of approximately 3,370 meters in the spring, they are struggling to feed their sheep despite the cold and rainy weather.The nomads, who live in the highlands intertwined with nature, but away from the opportunities of education, health, technology and social life from May to October, have been producing meat and dairy products for many years and contributing to the national economy.

While the men, most of who are a member of the Şavak tribe, shepherd day and night, the women produce cheese with the milk of the sheep they milk twice a day.

Women who start the day in the plateau early clean their tents, bake bread, make butter and wash clothes by hand in addition to their other daily tasks.

The nomads, who journey on horses on challenging highland roads, keep guard at night with Kangal dogs to protect the cattle against wild animals such as brown bears, wolves and jackals.

When the weather starts to cool down in October, the nomads are on their way back home from the highlands and spend the winter season in their villages.

İbrahim Köse, a 55-year-old nomad, told Anadolu Agency (AA) that he had been engaged in stockbreeding for nearly 40 years.

Describing the difficulty of plateau life, Köse stated: "I contribute to the family budget by dealing with animal husbandry. Ovacık is a district suitable for animal husbandry with its nature and pasture. We go to the highlands every spring and stay in the mountains for about three months. Sometimes we face rain and hail in the plateau, and we have difficulty in grazing the sheep. We transport them from the plateau to the district by horses."

Şenay Köse, a female nomad, noted that stockbreeding is very exhausting, adding that plateau life is harder than urban life. "Sometimes plateaus are very cold, and that is why we suffer. We have cracked hands and burned faces. We women wake up early in the day, prepare breakfast, complete our work in the tents. We milk the sheep twice a day and make cheese with the milk we obtain. At night, we do not sleep in case of wild animal attacks, and stay awake till the morning. Bears and wolves come. There are dogs. When the dogs bark, we wake up immediately and try to protect our animals," she said.