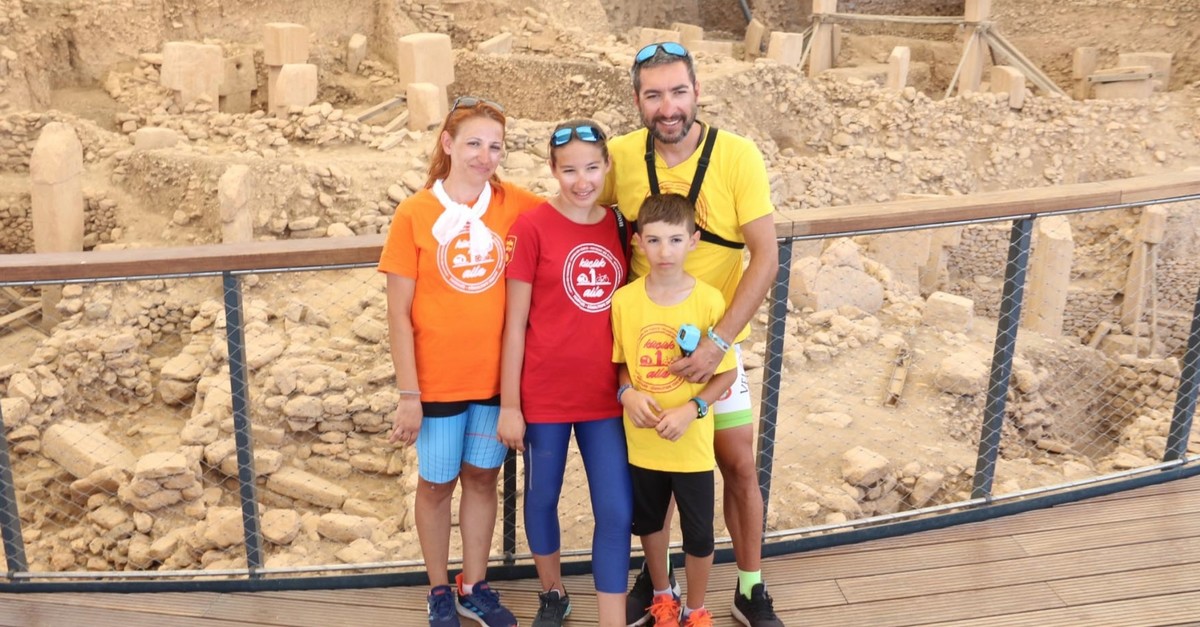 Family activities are fun. Sunday barbecues, going to the beach or just playing scrabble at home make family ties stronger. But the Pekçedenöz family take the "family activity" concept to the next level. The Pekçedenözs, who call themselves "1 Small Family," hopped on their bikes almost a month ago in the southwestern province of Muğla and started pedaling to Göbeklitepe, the "Zero Point in Time," in the southeastern province of Şanlıurfa.

After pedaling for 27 days, the Pekçedenöz's arrived at Şanlıurfa and were welcomed to the city by the members of Urfa Cycling Community. The cyclists and the family continued their journey to the UNESCO World Heritage Site where they meet Şanlıurfa's Provincial Director of Culture and Tourism Aydın Aslan and Birsen Çelik, the mother of Özgül Pekçedenöz, the mother of 1 Small Family.

After arriving at their final destination, the family toured the historic site and got information from Director Aslan.

After the tour, Rüştü Pekçedenöz, the father of 1 Small Family, said their hit the road as a family to draw attention to the importance of Göbeklitepe in the history of mankind. Sharing his happiness to be able to arrive at the site after pedaling for 450 kilometers with his family, Pekçedenöz continued:

"If you want to teach children geography and history, you have a responsibility to overcome the obstacles. Seeing the actual history is not the same as if you read about it in books. The duty of parents is to motivate their children and set examples for them. I believe that this little trip will give a new perspective to our children and fuel their adventurous ambitions. Thanks to this journey, we met so many lovely people on the road and had a chance to visit a few of the most beautiful places in our country."

Although the Pekçedenöz family enjoyed being on the road on their bicycles, they faced some hardships on the road to Göbeklitepe as well. According to Rüştü Pekçedenöz, the most challenging part of the journey was the hills they had to climb. "We share these moments on social media," said father Pekçedenöz, "but we teach our children not to give up, so we continued pedaling."

Özgül Pekçedenöz said that they will always cherish the time they spent during the journey. "We made so many memories," said mother Pekçedenöz, "these 27 days will always be remembered."

The youngest member of the Pekçedenöz family, Mithatcan, 11, said he enjoyed the journey. He also said he wants to inspire people and encourage them to ride bicycles more instead of using their cars.

"I want to say that if I can complete this journey on two wheels, you can do it as well. If my sister and I can come here on bicycles, you can use your own bicycles to go to work, or just to go the grocery store," Mithatcan said. Although the youngest member of the family enjoyed the journey, he is not sure if he wants to do it again. "I do not know whether I can come here on bicycle or not again. But I want to continue these journeys. I hope the next destination would be closer. I do not know if I can make another long trip."

Mithatcan's big sister, Ceren, 14, said the only thing that was challenging was to cycle on the road which is not suitable for cycling. Other than that Ceren was happy to be on the road with her family and having seen Göbeklitepe.

Göbeklitepe was discovered during excavations by researchers from Istanbul and Chicago universities in 1963, and is located near the neighborhood of Örencik in Şanlıurfa some 18 kilometers from the city center. Dubbed the "ground zero of human history," Göbeklitepe stands out among other archaeological sites, dating back 12,000 years, circa 10,000 BC.

The site is also one of the earliest examples of the establishment of an advanced social system as monuments, sacred spaces and symbolic motifs indicate. Unlike previous sacred sites, ritual places mostly included in natural formations such as caves, Göbeklitepe stands out with larger and smaller rectangular structures built by manpower. Historians and archaeologists believe the structures such as pillars represent "ancestors or gods" in the Neolithic age.