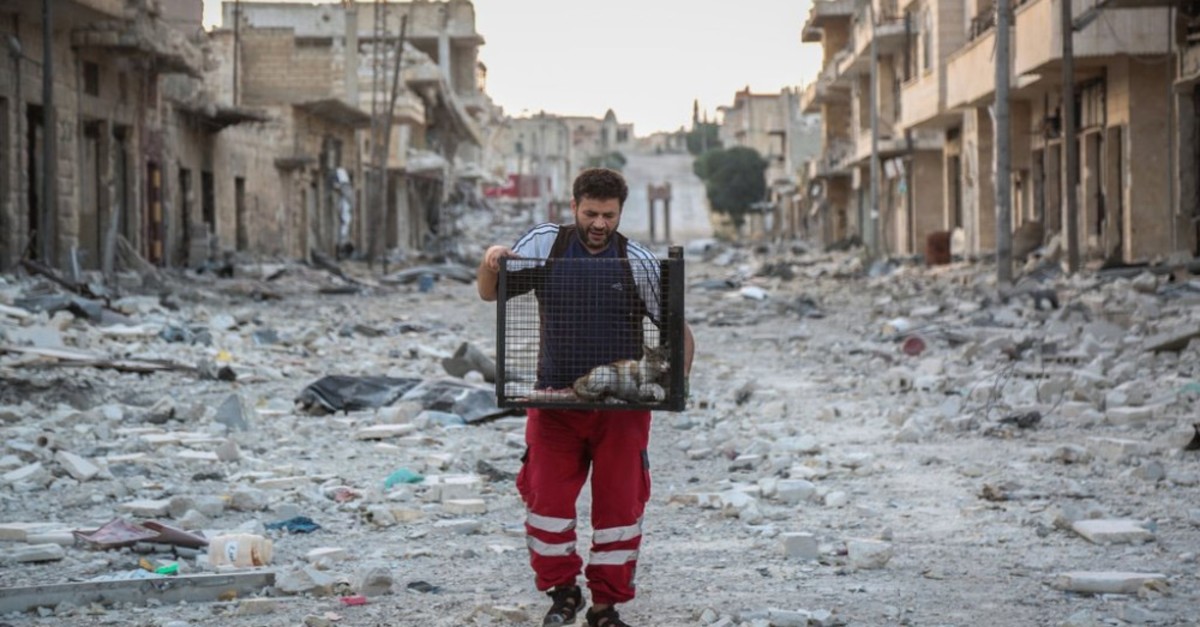 Mohammed Alaa Aljaleel recently went on a dangerous rescue mission to Syria's northwestern province of Idlib. His goal: to save animals left behind by people fleeing heavy shelling and airstrikes.

It was not the first such mission for this animal rescuer, who has already garnered international fame as the "cat man of Aleppo." Years after first gaining that title in his home town, the "cat man" who goes by the name Alaa has found himself doing it all over again.

"A few months ago, rescue teams in the countryside of Idlib called me and told me 'we are rescuing people, but we cannot rescue starving animals,' so I decided to make this mission," Alaa told German media service dpa.

The southern rebel-held areas of Idlib have been under heavy aerial and ground shelling by Syrian government forces and their Russian allies since April, prompting the displacement of some 400,000 people, according to U.N. estimates. So, Alaa, a 44-year-old ambulance driver and paramedic, went on a new mission: He would arrive in southern Idlib between five and seven in the morning, when there were usually no heavy airstrikes, and look for abandoned or hungry animals.

"I went to Khan Sheikhoun, Maaret al-Noumaan, Kafrnabel while ignoring the shelling and managed, despite the difficult task, to get most of the starving cats out of the area," Alaa said.

His estimated rescue haul in the region: 80 stray cats from Kafrnabel, 40 from Maaret al-Nouman and more than 100 from Khan Sheikhoun. This was not Alaa's first effort to save abandoned animals in dangerous places.

He gained notoriety in 2014 during the bombardment and siege of rebel-held areas in Aleppo, his home town. Foreign media highlighted his story as he was protecting the animals while also helping people as an ambulance driver. In 2015, friends asked him to start a Facebook page, through which he became connected to people from around the world. He also decided to set up a sanctuary for cats.

"I loved taking care of cats since I was a little boy," he said, adding that he used to buy leftovers at butcher shops and feed animals on the streets.It is like my hobby to feed cats or dogs in the streets as I know they are hungry," Alaa said. "I learned from ancestors that whoever has mercy in his heart for human beings should have mercy for all living things."

In Aleppo, despite the siege, Alaa was taking care of hundreds of cats, some of which were left behind by their owners who fled the city. At one point, Alaa had 170 cats and a dog to care for. Then, shortly before eastern Aleppo was captured by government forces in December 2016, Alaa's sanctuary was bombed. Most of his cats were lost or killed. After the capture of eastern Aleppo, many people fled to Idlib, while others including Alaa went to western Aleppo. Alaa, who also lost his house, left with only 22 cats.

"I left in the car with some injured people and two cats. The rest of the cats were being carried by other people in plastic vegetable baskets, which I prepared like cages so the cats would not be scared and run away," he said.

After losing his home and his sanctuary, the first in Syria at the time, Alaa managed to buy a farm and set up a new sanctuary in the Kfar Naha area of western Aleppo, where he currently lives. He did it with the help of friends, as well as a crowdfunding campaign and the proceeds of a book telling his story. He has since expanded the sanctuary to include a health center, an orphanage and a kindergarten.

"I have in my center 85 child orphans, 13 of them have lost both parents," Alaa said, adding that he expects more orphans will be admitted to the center due to the ongoing government offensive on Hama and Idlib.

Now, he has set up another sanctuary for animals in Idlib as well.

"Children and animals have suffered the most in the Syrian war. This is why I will continue to help them," Alaa said.