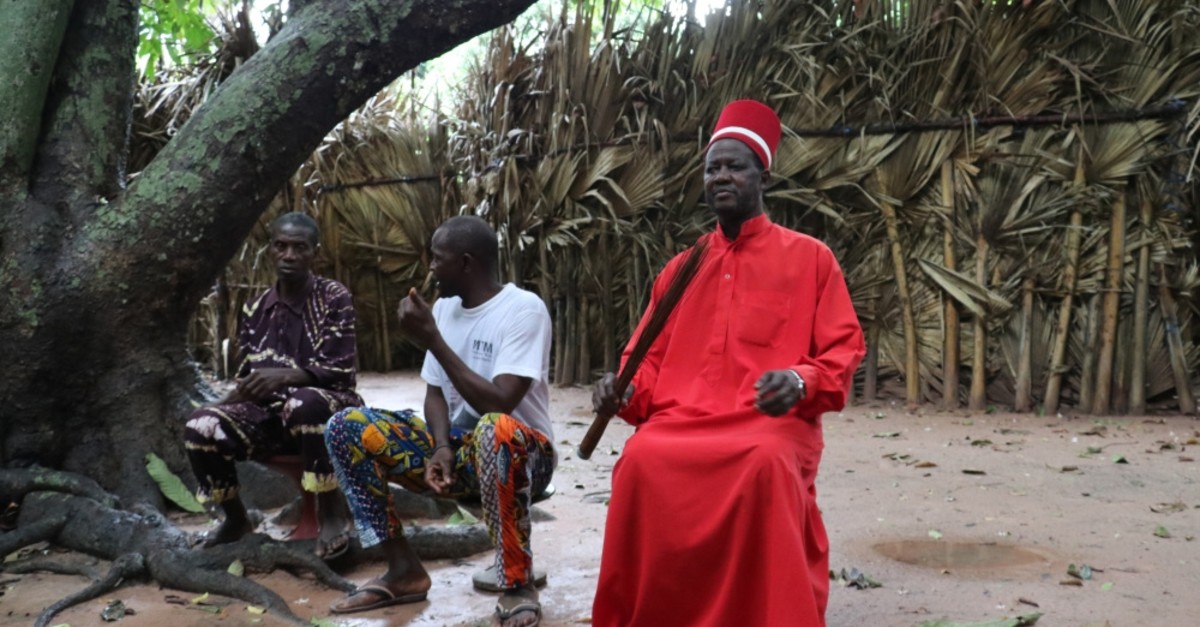 The kingdom is under the reign of King Sibilumbai Diedhiou, wearing all red, carrying straws of a bamboo broom as a symbol of power and sitting on a stool as a symbol of modesty.
by Anadolu Agency Sep 04, 2019 12:12 am

Dating back centuries, the Kingdom of Oussouye in southern Senegal's Casamance region sustains its traditional existence today. The kingdom is ruled by King Sibilumbai Diedhiou, who sits on a simple stool instead of a throne and wears a kaftan, kavuk (quilted turban for men) and socks.

Comprising a group of villages located between the Casamance River and the neighboring country Guinea-Bissau border, the kingdom is known for its forests full of palm, baobab and andiroba trees and rice fields. What is interesting about this place is that they are governed in line with animist belief.

In the deep forests, this kingdom is under the reign of King Sibilumbai Diedhiou, wearing all red, carrying straws of a bamboo broom as the symbol of power and sitting on a stool as the symbol of modesty.

King Sibilumbai is accepted as the ambassador of their god, called Ata Emit, and the translator of messages from spirits in addition to his title of political leader. His people address him as Mane, meaning your majesty in their local language as he fulfills these royal duties.

Established by the people of Diola, an ethnic community in the country, the kingdom draws attention with its unique nature, culture, traditions, religious rituals and social adaptation. 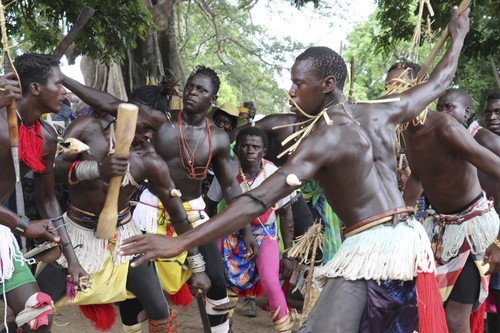 The youth of the kingdom welcome their guests by performing the Ekonkone dance, which is similar to the haka dance of the Aborigines, during special days and visits.

According to the kingdom's traditions, begging is forbidden in Oussouye, where rice harvested from the kingdom's fields, picked fruits and aids are used to feed the public and help the poor throughout the year.

This place is the most attention-grabbing one in the cultural sense in Senegal. Some Christian and Muslim people also live here as minorities. However, people from other religions are not included in the people of the kingdom and do not take place in the kingdom council.

In Oussouye, which has a population of nearly 100,000, no one wears red but the king. The Oussouye people expect that their king, whom they see as the power capable of performing animist traditions and rituals, to be in contact with the animist god ancestor Emit and spirits by reading signs in nature.

Besides, the king also sets the harmony and welfare agenda for the kingdom with various acts, such as determining the dates for ceremonies and assigning land to farmers.

The king, who can be visited by the public only at night, also hosts local and foreign tourists on certain days. The youth of the kingdom welcome their guests by performing the Ekonkone dance, which is similar to haka dance of the Aborigines, during special days and during these visits.

Government in the kingdom

Even if the oldest registries are dated at the beginning of the 1900s, it is thought that the history of the Oussouye kingdom dates back centuries.

Governed in line with the animist religion throughout its history, the king is not the traditional monarch, and the council of aldermen has a considerable role in the government.

According to the animist belief system, the king is not enthroned through familial succession. The new king is notified to the council of aldermen by spirits in line with his virtuous features. When the king is chosen, he takes over the spirits and become the messenger between the god ancestor Emit and his people.

16 years without a king

If the king dies, the council of aldermen comes together to determine who is worthy to be the new king among the three basic families in the kingdom. When there is not anyone with the capability of reigning, the throne remains vacant. The previous king died in 1984, and the kingdom was without a king for 16 years until 2001. The council of aldermen enthroned Olivier Diedhiou, who was a repairman and security worker in his previous life, at the end of these 16 years on the grounds that he was referred to them by the spirits. In line with the traditions of the kingdom, he was named as Sibilumbai Diedhio and ascended the throne.

The person who is chosen as the king in Oussouye cannot reject this duty and has to stay on the throne throughout his life until death.

King Sibilumbai, who is seen as a legitimate political and traditional actor even if he has no official authority, is given respect by all authorities in the country.

from time to time, the king plays a significant role in peacemaking. He is the mediator between the state and the separatists.

The last king Sibilumbai had an important role in peacemaking in Oussouye during the earlier revolt in Casamance. It is thought that due to the king's great mediating contribution that there is no separatist activity in the region recently.

It's hard to be king

According to the principals of the kingdom, King Sibilumbai cannot go out of the border of the kingdom. Speaking to Anadolu Agency (AA), he said, "The life as the king is much more difficult"

Stating that the Turkish Cooperation and Coordination Agency (TİKA) brings some food and stationery materials for his people sometimes, he thanked Turkey and sent his kindest regards. The king said that the materials provided by TİKA will contribute much to the education of children in Oussouye. "I am grateful that Turkey helps my people. When these children obtain a footing one day, they will contribute to Oussouye and Senegal," he added.