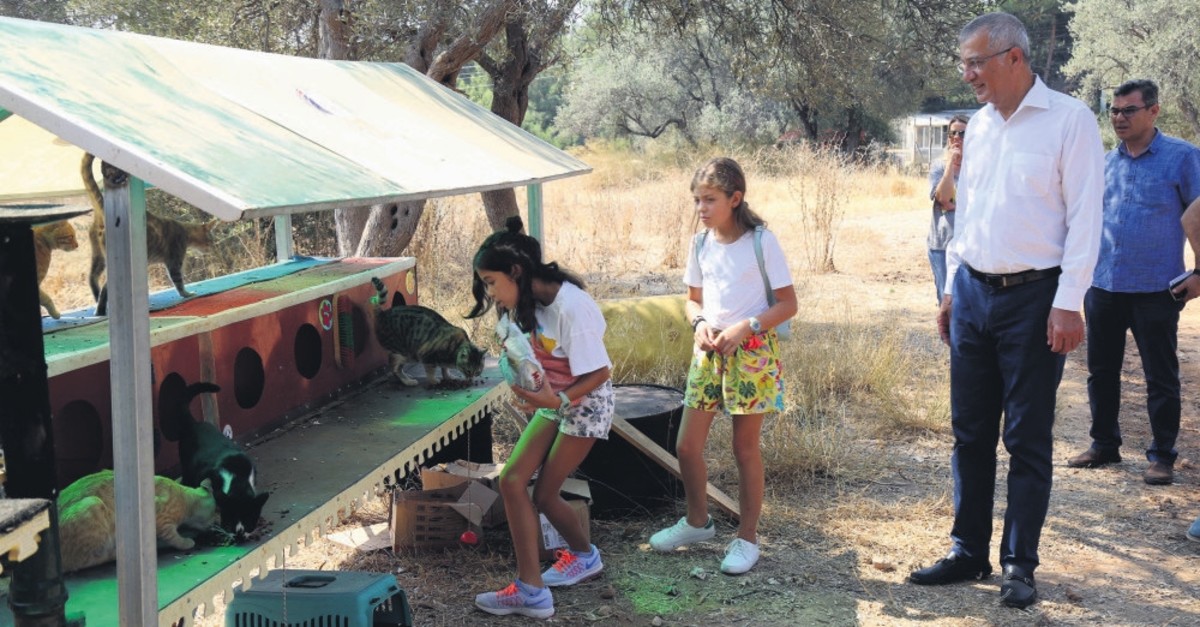 The children feed stray cats with food bought with the proceeds from the sales of the books.
by Anadolu Agency Sep 14, 2019 12:04 am

A group of children in southern Turkey came up with a brand-new project in which they collected books and sold them to support stray animals.

The project was spearheaded by a children's council – a group of children meeting under the auspices of the local government – in Mezitli in the province of Mersin. Fourteen children between 11 and 17 years old kicked off a project to sell their books in order to buy food for stray animals.

The project was first implemented a month ago and children were really excited because they combined two things, encouraging people to read books and helping stray animals, Sibel Gelbul told Anadolu Agency (AA). "A total of 120 books were sold but because the people knew how the money would be spent, they paid more than the actual value of the book," she added.

The books were generally children's books but there were also novels for adults as some people donated their own books.

The animals chosen were not housed in municipality shelters. A local animal lover in Mezitli allocated three or four acres of her land and turned it into an animal shelter to take care of 200 cats and 180 dogs.

"We chose this shelter specifically because the owner is not related to any institution and is looking after the animals at her own expense. She is really good at it. Disabled animals and pets found in the streets were separated," Gelbul said. "The proceeds were more than we expected. We bought animal food for that shelter and we still have more food."

Gürsoy, age 11, the head of the children's council, said the main idea was to promote reading books.

"While we were trying to decide what to do with the money, we thought the best thing to do would be to buy food for the stray animals," Gürsoy said.

Cağla Gürsoy, Sadık's mother, said the book-food project were among six other projects including "the global warming and child workers."

"The children's council doesn't have its own budget so the only thing they can do is either to include wealthy people into their projects or something like in this project, selling second-hand books and using the proceeds," Gürsoy said.

The project attracted unexpected attention and the children were able to collect lots of books in a very short time, she added.

"While we were looking at the photos later, we realized that some people visited the book stands more than once to buy the books," Sadık said.

Mert Dinçer, the vice head of the children's council, said he donated 20 books of himself and the children fed animals themselves. "But we could not distribute all of the food so we left the remaining food at the shelter," he added. Dinçer said they also aimed to be an example for other children to show what they could do through social responsibility projects.

The children's councils are compulsory in municipalities, many of which include children in social projects through the councils.