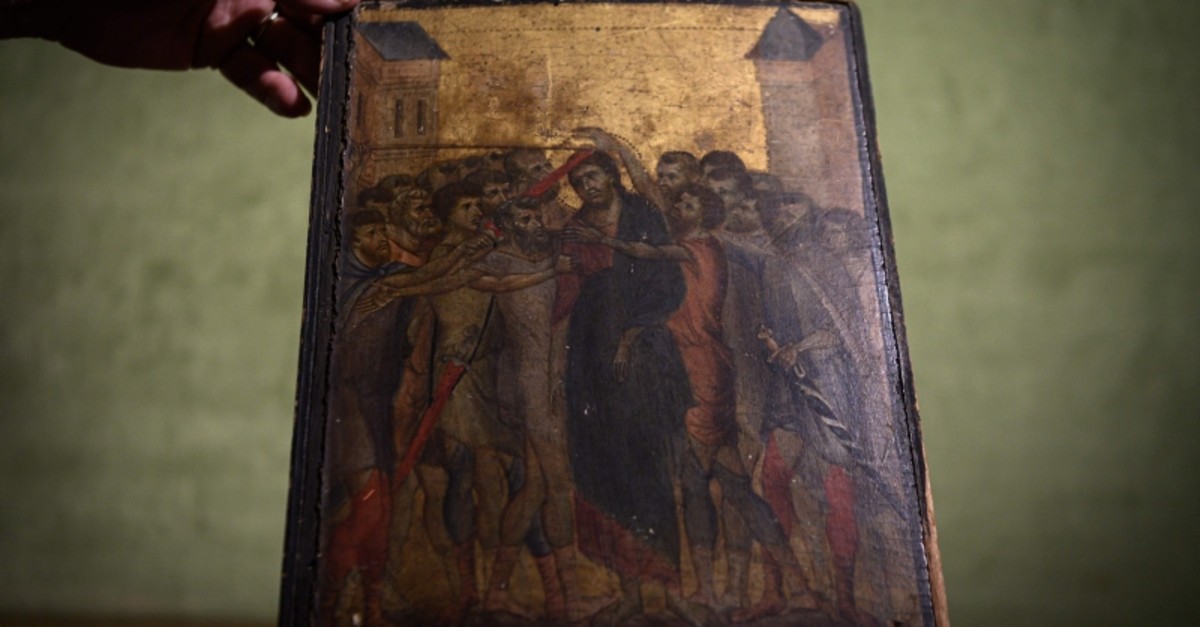 This photo taken on September 23, 2019 in Paris shows a painting entitled ,the Mocking of Christ, by the late 13th century Florentine artist Cenni di Pepo also known as Cimabue (AFP Photo)
by Sep 24, 2019 12:11 am

An early Renaissance masterpiece by the Florentine master Cimabue has been discovered in an old lady's kitchen in a town near Paris, art experts said Monday.

"Christ Mocked", by the 13th-century artist who taught Giotto, is estimated to be worth between four and six million euros ($4.3 million $6.6 million), according to the Old Masters specialists Turquin.

They said the work was owned by an old lady in the northern French town of Compiegne, who had it hanging between her kitchen and her sitting room.

It was directly above a hotplate for cooking food.

The painting is thought to be part of a large diptych dating from 1280 when Cimabue painted eight scenes depicting Christ's passion and crucifixion.

Two other scenes from the work hang in the National Gallery in London -- "The Virgin and Child with Two Angels" -- and the Frick Collection in New York ("The Flagellation of Christ").

The scene in the National Gallery was also lost for centuries and only found when a British aristocrat was clearing his ancestral seat in Suffolk.

The French painting's elderly owner thought it was just a rather old religious icon when she took it to her local auctioneers to be valued.

Early Renaissance art was hugely influenced by Byzantine art, which is still produced in a similar style today on a background of gold paint.

However, tests using infrared light found that there was "no disputing that the painting was done by the same hand" as other known works by Cimabue, said art expert Eric Turquin.

It will now go under the hammer at the Acteon auction house in Senlis, north of Paris, on October 27.