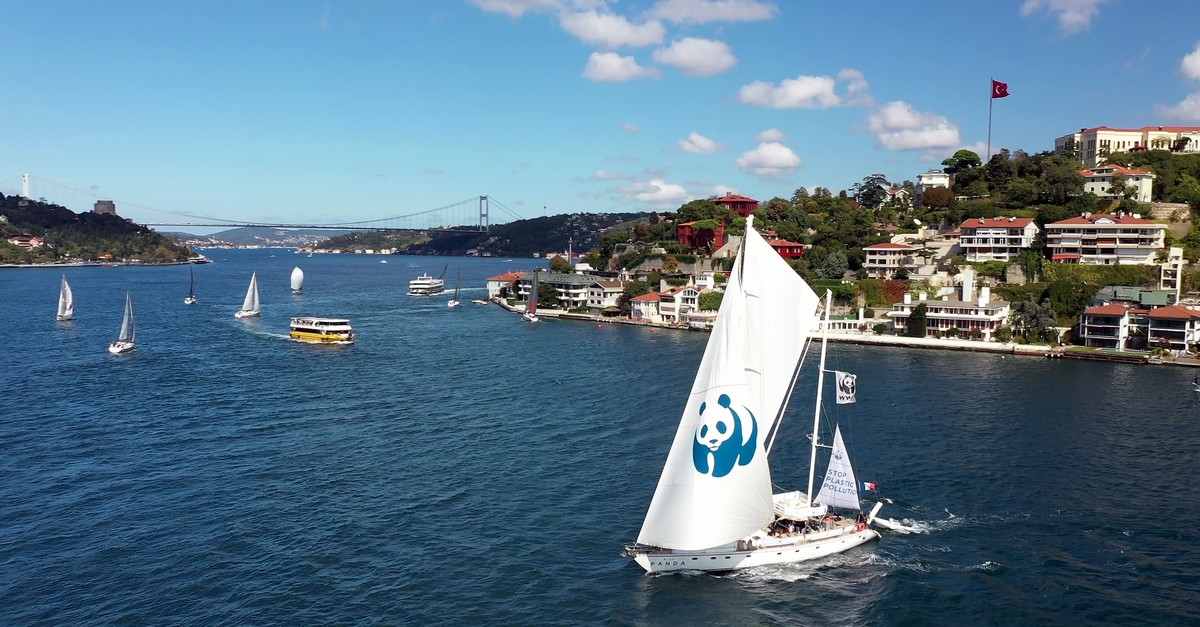 WWFu2019s ship Blue Panda has been sailing the Turkish seas for the last month. The Blue Panda and its crew will travel to the North African countries of Tunisia and Morocco and will end its journey in France next month.
by Anadolu Agency Oct 09, 2019 1:45 am

World Wildlife Fund's ship Blue Panda aims to make the Mediterranean free of plastics. With hundreds of kilometers of coastline along the Mediterranean, Turkey is ready to take charge of its future

In its maiden year, the World Wildlife Fund (WWF) ship Blue Panda has been making stops at key ports in the Mediterranean with the hope of stemming the tide of plastics choking the world's natural environment.

Following Amsterdam and the French city of Nice, İzmir on Turkey's Aegean coast was one of the first cities to sign a contract to be part of WWF's Plastic Smart Cities initiative, which aims to motivate cities around the world to set targets to stem the flow of plastic waste in nature by 2030 by regulating laws on restaurants, businesses and citizens.

According to WWF data, the Mediterranean region is the world's fourth-largest producer of plastic goods, and its residents and visitors generate 24 million tons of plastic waste per year.

Charles Desclercs, the Blue Panda's captain, said he has seen a great deal of plastic pollution on the ship's journey, which started in France.

"Among the cities we traveled to, we saw a lot of pollution between Sicily and Italy, and there was quite a lot of pollution between Sicily and Greece. When we reached the Sea of Marmara, especially the Bosporus was highly polluted with plastics," he said. Desclercs stressed that even the most beautiful waters are scarred by plastic pollution. "We anchored in the bay of Santa Manza [near the French island of Corsica] to dive," he recalled. "The water is wonderful over there. But when I put my snorkel on, it was terrible. There were millions of micro plastic pieces floating around, surrounding us."

WWF data shows that 57 million tons of plastic are being dumped into the Mediterranean every year, which is the equivalent of dumping 33,800 plastic bottles into the water every minute. Almost half of the region's total amount of mismanaged waste is attributable to Egypt, followed by Turkey, Italy, Algeria and Morocco, according to the WWF.

Desclercs said during their journey, they have seen a lot of damage due to pollution, adding that the harm plastics cause marine life is no exaggeration.

Yaz Güvendi, the Blue Panda's spokesperson, said the WWF studied 178 whales during a month of research and biopsied 45 of them to check on their level of plastic contamination.

Before the Blue Panda started its voyage, the crew did research in the Pelagos Sanctuary, a protected marine area between Italy and France in the Mediterranean, which is home to several cetacean (whale, porpoise and dolphin) species, including sperm, fin and pilot whales.

"When we were on our Pelagos mission, the scientists did biopsies on the whales. They have proof that plastic is actually in the fat of the whale, so the plastic has indurated in the skin of the whales, and it goes directly in the fat. It's not just the stomach," said Desclercs. The reports show that globally, over 700 marine species, including sea mammals and birds, are impacted by plastic through ingestion, entanglement or habitat degradation.

Güvendi said the Blue Panda has done a lot to push authorities to take action and added that mayors of cities along their destinations have welcomed the group and are joining their fight against plastic consumption. But despite the benefits of cleaning up plastic waste, Desclercs said action should really be taken at the source, with the production of single-use plastics halted altogether. "There are a lot of other nongovernmental organizations that clean up beaches, but the WWF believes it's better to act at the beginning, which is why they work with governments, restaurant owners and businesses within cities," he said.

"Coming to İzmir wasn't in our plans," said Guvendi. "We were planning to stay in Istanbul and then travel to Kaş [in Antalya, on the Turkish Mediterranean], which is a marine protected area where the WWF Turkey has worked for more than 15 years. But it was the municipality that wanted us in Izmir, and now the boat is open to visitors. In Kaş, we'll also have meetings with the mayor, and we'll launch our new report about the WWF's marine monitoring that started last year. This monitoring was also done five years ago and will show how marine-protected Kaş affected the environment and how many invasive species came," Güvendi added.

Monitoring of the marine life in Kaş was done five years ago, and therefore it was a marine protected area, and this year, the monitoring was done again to compare it with five years ago.

After Turkey, the Blue Panda and its crew will travel to the North African countries of Tunisia and Morocco and will end their journey in France in November.

The WWF urges governments, industry and the public to take responsibility and jointly build an efficient circular economy model where unnecessary plastic is avoided and no plastic becomes waste. 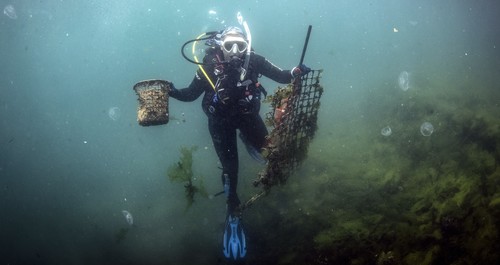 A diver picks up garbage from the bottom of the sea as a part of the Zero Waste Blue project.

Initiated by first lady Emine Erdoğan, Turkey's Zero Waste Movement has spread to the seas under the title of "Zero Waste Blue." As a part of the program, 158,000 cubic meters of waste were removed from the seas in just four months. As part of the project, warnings will be placed everywhere near the sea, from piers and passenger ferries to beaches, hotels and schools, to highlight the issue. Students will be educated on preventing pollution and cleaning campaigns will also be organized across the country. The organizers of the project also plan to set a designated Zero Waste Blue coast to set an example on how a truly clean coastal area should be.

Some beaches will also be designated plastic free, while hotels and ports successful in switching to zero waste practices will be certified. The project also seeks help from fishermen to keep the seas clean.