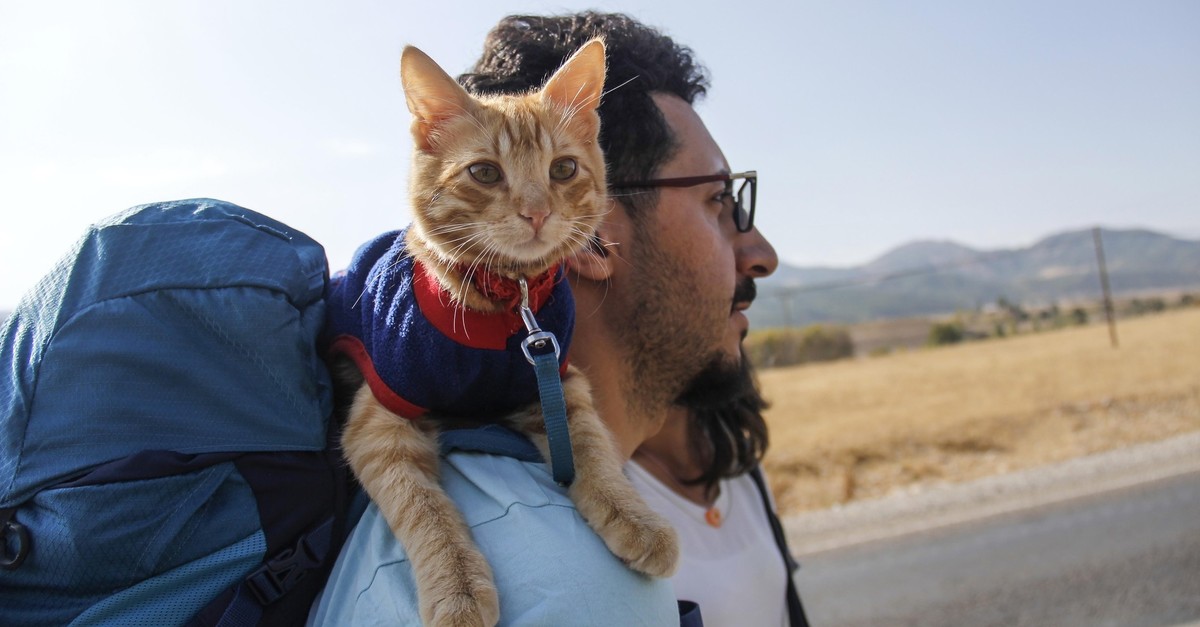 Azman travels around Anatolian towns with its owners in their backpacks. (AA)
by Oct 14, 2019 7:24 pm
Some people are born with the urge to travel. To spice up their travels, Hamza Mutlu and his girlfriend Özge Kübra Mace decided to hitchhike through Anatolia; however, they are not alone in their endeavor: They are accompanied by their cat, Azman, who travels in their backpacks.
Working at the Artvin Arhavi State Hospital, 24-year-old Mutlu and 25-year-old Mace began hitchhiking and traveling about a year ago. Due to their schedule, the couple had difficulty finding time for traveling and when they did, they did not want to leave their cat, Azman, whom they adopted when it was a little kitten, at home alone.
When they first hit the road, they wanted Azman to be their companion not their pet hence instead of carrying it in its box, they decided to make a special backpack in which they could carry Azman along the way.
"We first took Azman on our shorter travels," said Mace. "When it got used to being on the road, we continued to take it with us everywhere. We are happy to live and travel with Azman. When people see us on the road, Azman gets all the attention. It made our lives much more colorful and happier."
Mace said they traveled to Cappadocia without Azman and got bored. "We thought we would have so much more fun if Azman was with us," added Mace.
So far, Azman has traveled with the couple for 10,000 kilometers. Mutlu, Mace and Azman, the gurus of the roads, have been to Van, Kars, Erzurum, Giresun, Bingöl, Trabzon and Rize.
Last Update: Dec 20, 2019 1:03 am
RELATED TOPICS