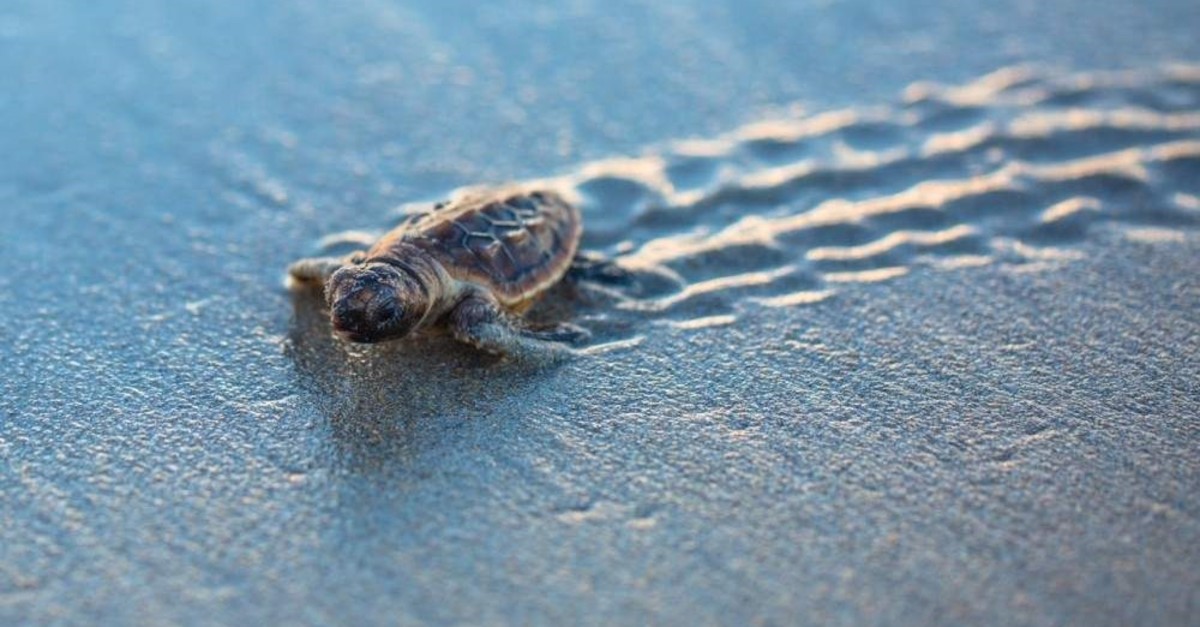 Loggerheads are the most common turtle in the Mediterranean, nesting on beaches from Greece and Turkey to Israel and Libya. (AA Photo)
by Mehmet Emin Birpınar Oct 23, 2019 12:46 pm

Leaving her glittering life behind, a British woman has changed the fate of loggerhead turtles and one of the most beautiful beaches in Turkey; all she had to do to achieve this was to love the Earth and its creatures


She is a 97-year-old British woman who used to be a jetsetter. She visited Dalyan, Muğla with her boat for the first time in 1975 and she was fascinated by it. When she came back in 1986, she moved there and never went back.
Nowadays, Dalyan and caretta caretta turtles, also known as loggerheads, come under her. Let me introduce you to June Haimoff, aka Captain June. She was born in 1922 in London, as a daughter of a famous petroleum engineer.
In her youth, she went to school for music, dance and ballet to become an opera singer, and then she took up a passion for oil painting. She married twice and took part in the jet set world. She traveled through the Aegean on her boat that she bought after getting a divorce from her second husband.
For the first time in July 1975, she traveled to the Dalyan coastline with her boat. She loved it there so much that when she came back in 1986, she decided to move to a shed on İztuzu Beach with her boat.
Dalyan’s leading figure
After moving to Dalyan, Haimoff dedicated her life to nature and its creatures, mainly caretta carettas, which weigh 80 to 90 kilograms. She established a foundation and donated her house with all her books to serve as a museum for the people of Dalyan. She acquired Turkish citizenship and gladly voted in the elections.
When I asked her what party she voted for, she responded without hesitation, “To the one that protects the environment.”
For the last 33 years, Haimoff has been one of the most significant figures in town. She has won over the locals as well as the tourists and grown into a landmark for Dalyan. She has written four books on Turkey’s nature, some of which are translated in Turkish. She made so much for nature and society in Dalyan that a street in town was named after her.
Despite her age, Haimoff continues to work for the community she is a part of and in fact she does not believe she is an old woman. On the contrary, she fights for the environment, uses a computer, goes online, sends e-mails and she is up to date.
A foundation for caretta carettas
During her time in Dalyan, Haimoff ran into caretta carettas when they were making it to the beach to leave eggs. She took a closer look at the endangered turtles to see how and when they made it to the beach, and found out about their spawn, reproduction system and their way back to the Mediterranean Sea.
When she found out that a hotel was to be built on İztuzu Beach, the nesting site and habitat for caretta carettas, she launched a campaign that drew the world’s attention. After a long battle, she managed to successfully halt the operation to build a hotel.
Having met then-Prime Minister Turgut Özal, Haimoff played an important role in the establishment of the Environmental Protection Agency for Special Areas.
She tells the story behind her fight for caretta carettas’ right to live and the victory in her book titled, “Captain June and the Dalyan Turtles,” published in the U.K. back in 2002. The book was also published by Remzi Kitabevi under the title of “Kaptan June ve Kaplumbağalar.”
Haimoff also released a song in 2003 whose revenue went into conservation efforts exerted for caretta carettas.
“Captain June” as the people of Dalyan call her, has been safeguarding the nature of Lake Köycegiz and Dalyan. Named after her, the Captain June Sea Turtle Conservation Foundation (Sea Turtle Foundation in short) intends to conserve the neighboring sea turtles and improve their habitat conditions.
Global citizen
I believe this is what being a global citizen means. A woman who takes action for turtles that are hundreds of kilometers away and dedicates her life to them. She has the courage to not only stand up for the turtles but also to go counter to any actions which may harm the site they live in. She promotes the local site and its values, flora and fauna to the world and she puts effort to protect them. She is a remarkable token of how caring for the nature, human beings, and animals is not just about geography. It is impossible not to look up to her. I have a question, but it is not addressed to young people who demonstrated during Gezi Park protests, exercising their democratic rights: Who is an environmentalist? Those masked agitators who burnt down their homeland’s properties on the pretext of some trees being cut down or the aforementioned lady, who is safeguarding a foreign country’s assets, environment and natural resources?
* Deputy minister at the Republic of Turkey's Ministry of Environment and Urbanization, chief climate change envoy