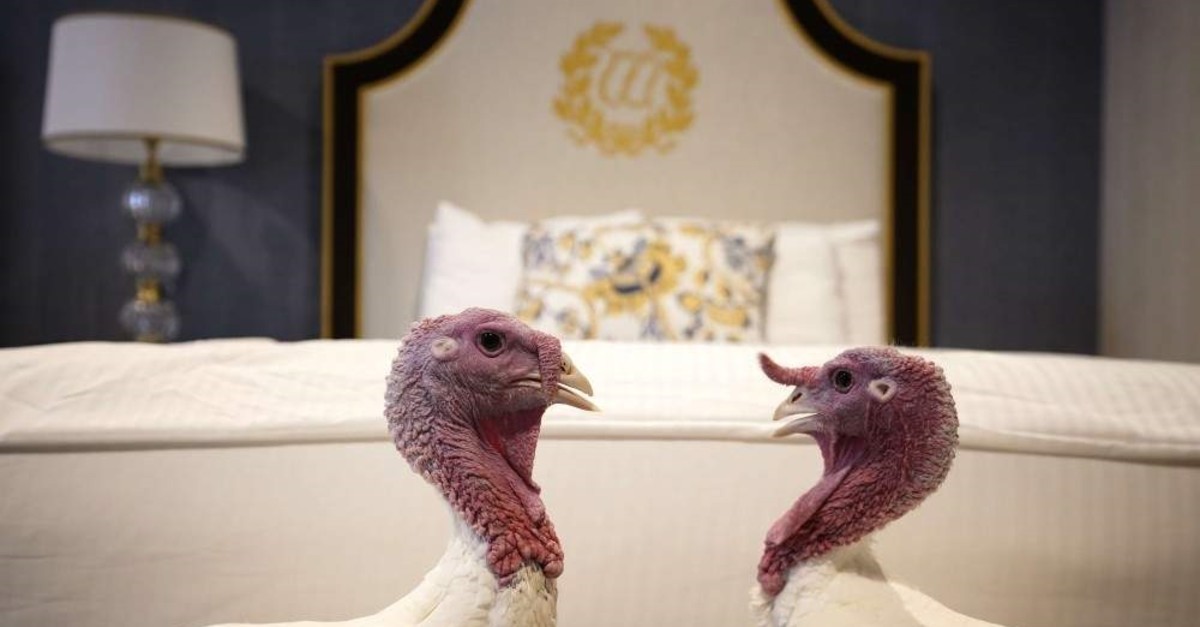 Bread and Butter, the national Thanksgiving turkey, and its alternate hang out in their room at the Willard Hotel after being introduced to members of the media during a press conference held by the National Turkey Federation, Washington, Nov. 25, 2019. (AFP)
by Anadolu Agency Nov 29, 2019 12:47 pm
People have always wondered about the origin of turkeys, a bird that has become a staple of Christmas dinner and an inevitable part of Thanksgiving feasts.
The bird Americans associate with Thanksgiving has been referred to by different geographic locations in various languages across the globe.
The first confusion regarding the large bird we call a turkey was made in the Mediterranean country of Turkey, which over the years some believed was where the bird originated from.
"The bird is called a turkey due to some confusion. The turkey that we eat at Thanksgiving, genus meleagris, is a domesticated form of a wild bird still found widely in North America," Orin Hargraves, a lexicographer, told Anadolu Agency (AA).
Hargraves said there were two theories as to why it is called a "turkey."
Turkeys looks like a different bird of slightly similar appearance, guineafowl – birds from the Numididae family, four genera, originating from Africa – which was called a turkey-cock in Europe since it was originally imported from Turkey, then part of the Ottoman Empire.
The African bird with dark feathers, white spots and a patch of brown on the back of its neck was brought by traders to Europe after passing through Turkish lands.
"Early American settlers who had already seen the guineafowl thought that the North American bird resembled it, and so they also called it a turkey," he said.
To simplify, the name was based on a mistaken identity of two similar-looking kinds of birds – the species of wild turkey, also called meleagris gallopavo, which were domesticated by indigenous Americans in the New World, and guineafowl, coming to European tables from Africa.
The other "less convincing" theory says the North American bird made its way to the Middle East before being introduced to England and was called "turkey" there because of its Turkish origin.
Confusion spread across various regions
It seems English is not the only language with a fascinating name for the North American bird.
Assuming the Turkish roots of the bird, one might guess it would be called "turkey" in Turkey, but it's not. In Turkey, the iconic American bird is called "hindi," which literally means from India. Almost the same meaning is seen in several other languages, including Ukrainian, Polish and Russian, while the French call it "dinde," a short form of "coq d'inde" – a name that also references India.
In the Catalan language, people use "gall dindi," meaning an Indian rooster. It is said the misnaming of turkey as a bird from India was based on a common old misconception that India and the New World were the same place.
Interestingly, in India, where millions assume is the origin of the bird, it is referred to as "turki." The geographically oriented name continues in Arabic, whereas turkey is called "deek rom-e," which means "Roman chicken," referring to Italy. At the same time, some local dialects of Arabic call it "habashi," which means Ethiopian bird.
The disowned bird is called "western chicken" in Vietnamese, while it's referred to as a "fire chicken" in Chinese. In Malaysia, turkey is called a "Dutch chicken," while in linguistic clusters such as Dutch, Danish, Swedish and Finnish, the bird got a name "kalkoen" – changing as "kalkun," "kalkunna" or "kalkon" in Scandinavian languages – which refers to the old Indian port of Calicut. Meanwhile, Bahasa Indonesia refers to it as a "kalkun chicken."
Calicut, also known as Kozhikode, is a coastal city in the south Indian state of Kerala, which is believed to have been discovered by Portuguese explorer Vasco da Gama in 1498; thus, the port was tied to the Portuguese trade in the 1500s.
In Portuguese, we find that turkey literally means "Peru," as in the South American state.
"Misir," or "misirka," a Macedonian rendition of turkey, comes from the Arabic name for Egypt, which is in the wide list of supposed homelands of the bird.
Interestingly, some other languages have not adopted geographic location references and chose a name from a sound associated with the popular bird.
The Persians call them "booghalamoon" similarly to its pipe, while Germany's "truthuhn" – coming from the trut hen – is associated with the noise turkeys make.
In Japanese and Korean, turkey is called the "seven-faced bird," probably due to their ability, especially males, to change facial expressions depending on their mood.
The Dari language, a variety of the Persian language spoken in Afghanistan, refers to turkey as "fel murgh," meaning "elephant chicken," probably due to bird's appearance.
In Mexico, it is called "guajolote," a word of Nahuatl origin, meaning "big monster," which derived from the name for male turkeys' large size and feathers.
The Albanians call it a "sea rooster" or "sea hen."
While there are lots of disputes about how the English term for the avian creature made its way into the language, the word "turkey" as a bird was first seen in the mid-1500s.
The English name, symbolized now as a traditional Thanksgiving food, is thought to be a holdover from shipping routes passing through Turkey on the way to delivering birds to European markets.
Turkey-cocks were mentioned by William Shakespeare in "Henry IV," which is believed to have been written no later than 1597.
The Oxford English Dictionary says the earliest use of "turkey-cock" in English dates to the 1540s, while early European dictionaries like the "Nomenclator of Junius" of 1606 published in Paris also confirm the use of the term.
We also find a reference to a turkey on Christmas Day in Charles Dickens' 1843 novella, "A Christmas Carol."
Last Update: Dec 20, 2019 2:00 am
RELATED TOPICS