Canceled, eco-anxiety and many more: 7 terms that took 2019 by storm 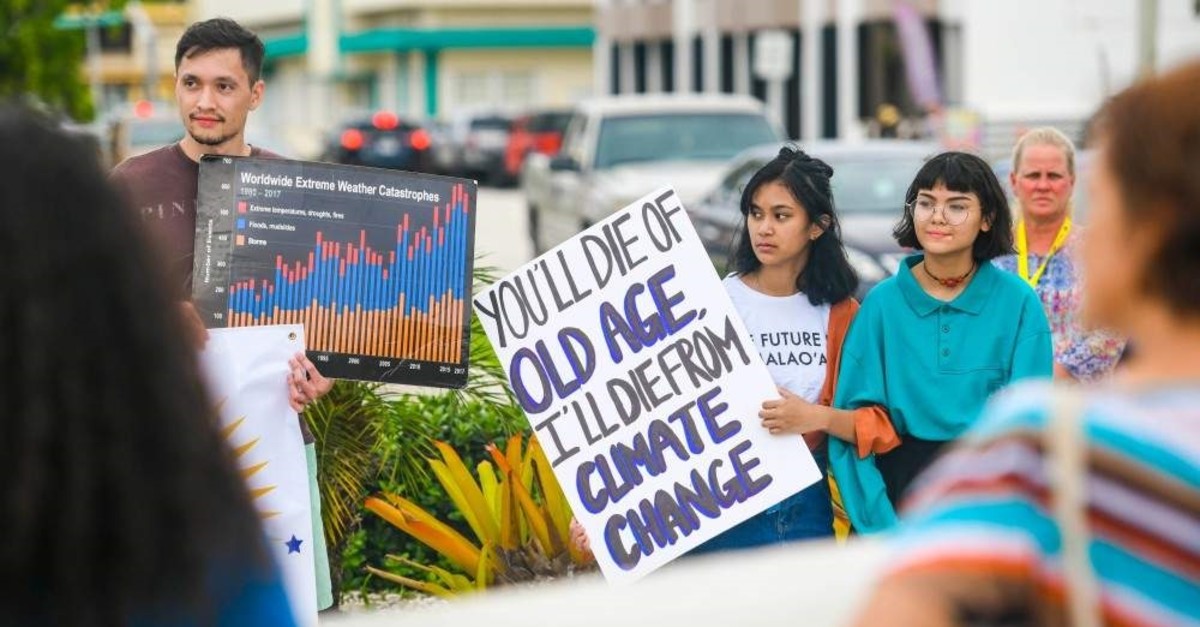 Supporters carry signs during a rally, hosted by the Micronesia Climate Change Alliance, to raise awareness of issues affect global climate change, in front of the Guam Congress Building in Hag t a on Wednesday, Aug. 7, 2019. (Reuters Photo)
by Daily Sabah with Reuters Dec 31, 2019 12:34 pm

What a year it was!

Author J.K. Rowling became the latest person to be "canceled" this year in a row over transgender rights after the action signifying online outrage took off in 2019, along with terms such as "girly swot" and "eco-anxiety."

Rowling, the creator of Harry Potter, was both blasted and praised for backing a tax expert who was sacked over a tweet in which she wrote that people cannot change their biological sex.

The surge in the use of "canceled" over the year came alongside increasing discussions over "flight shaming" and the use of "they" as a singular pronoun.

From political spats to new terms that entered dictionaries, here are the terms that took off in 2019:

Many celebrities, from the likes of Kanye West to Bill Gates, all got a taste of what was like to be "canceled" in 2019 as the internet expressed outrage at their actions or political views and vowed to withdraw support for the stars. The move, however, didn't really result in real-world ramifications for the superstars.

The environment, however, was by far the most dominating topic of the year, with climate emergency coming out as the top term. Oxford Dictionaries, a collection of online dictionaries produced by a publishing house of Oxford University, went as far as declaring climate emergency its word of the year after seeing its usage soar more than 10.796%. Researchers said this demonstrated a shift in the way people were talking about the climate.

"Eco-anxiety" was another popular climate-related term in 2019, particularly among young people. The American Psychological Association defined eco-anxiety as "a chronic fear of environmental doom," while mental health studies from Greenland to Australia revealed a surge in people reporting stress or depression about the impact of climate change. Oxford Dictionaries said it recorded a 4.290% increase in the term in 2019.

Taking off in Sweden, home of teen climate activist Greta Thunberg, the term "Flygskam," translated as "flight shame," was also coined in reaction to shifting attitudes toward air travel and the drive to reduce carbon emissions. Thunberg refuses to fly to events and has inspired other travelers to look for more climate-friendly travel options.

British Prime Minister Boris Johnson made headlines for making several gaffes and starring in various scandals, but when he referred to his predecessor David Cameron as a "girly swot" in a cabinet paper, he unleashed a wave of unexpected positivity. The sexist term was instead adopted with pride by women in politics and elsewhere to mean intelligent, smart, funny women.

Almost in protest of the English language's lack of a gender-neutral pronoun – unlike Turkish, which has "o" – U.S. dictionary Merriam-Webster picked "they" to describe someone who does not identify as male or female as its word of the year. It said searches for that use of the word had increased by more than 300% this year.

"Self-partnered" also became a thing when British actress Emma Watson told Vogue magazine in November that she was happy to be single as she neared her 30th birthday, adding: "I call it being self-partnered." The term went viral, both praised and ridiculed, even though the actress later said it was just "a throwaway comment."