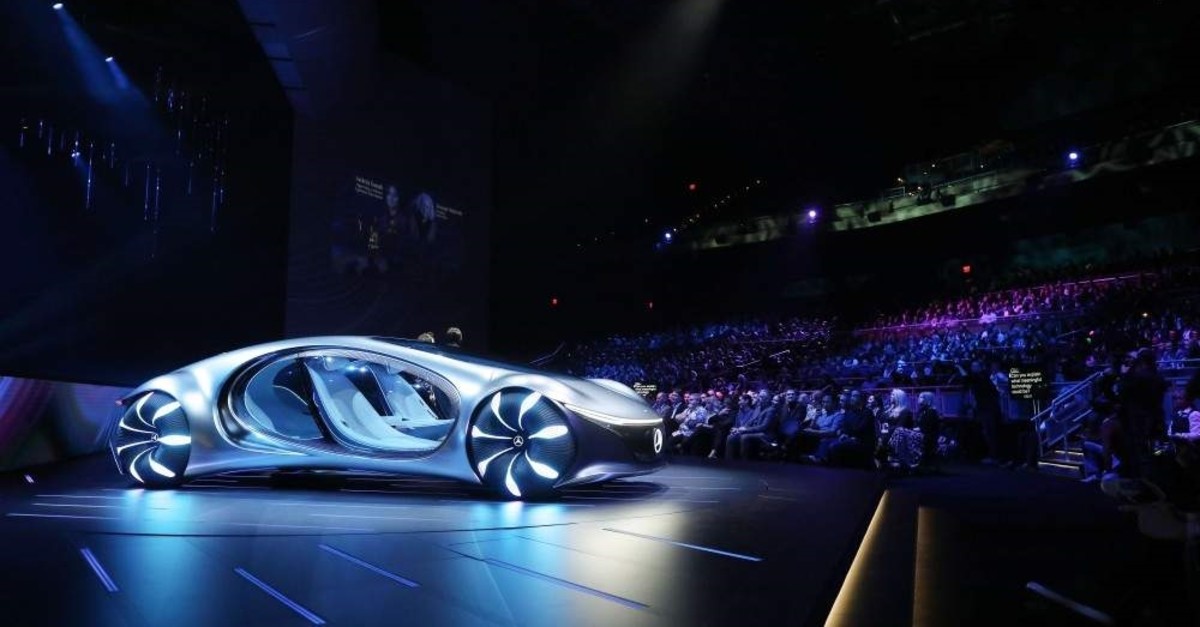 The Mercedes-Benz Vision AVTR concept car is displayed during a keynote address at CES 2020 at Park Theater at Park MGM on January 6, 2020 in Las Vegas, Nevada. (AFP Photo)
by Daily Sabah with Agencies Jan 07, 2020 5:26 pm

A smart city from Toyota, a surprise electric car from Sony and flying taxis from Uber and Hyundai were among the technologies showcased this week at CES

It's that time of the year again!

The Consumer Electronics Show (CES) 2020 is taking over Las Vegas, Nevada – the city that never sleeps – for a week only, to showcase some amazing technology and weird and wonderful gadgets.

The annual showcase is where big companies and startups unveil and promote their latest gadgets, many of them infused with microphones, cameras and artificial intelligence. Though weighted toward the consumer market, much of what's on display may also be useful to law enforcement, not to mention prying employers or heavy-handed governments. Self-driving cars, streaming services and surveillance technologies are among this year's hot topics.

Here are a few highlights:

The Japanese auto giant said it would create a "woven city" on 70 hectares at the base of Mount Fuji in Japan, powered by hydrogen fuel cells, to test autonomous driving and other technologies.

"Building a complete city from the ground up, even on a small scale like this, is a unique opportunity to develop future technologies, including a digital operating system for the city's infrastructure," said company President Akio Toyoda.

The city will be designed for around 2,000 people, including Toyota employees and visiting researchers, with sustainable construction materials, in-home robotics to assist with daily living and sensor-based AI to check occupants' health. 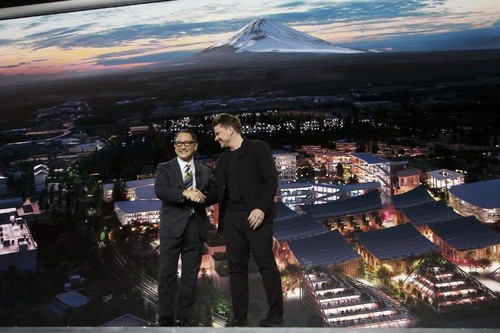 Toyota CEO Akio Toyoda, left, smiles as he is joined on stage by Danish architect Bjarke Ingels, CEO of Bjarke Ingels Group, after both talked about building the prototype Toyota city of the future. (AP Photo)

Uber and Hyundai announced that they were teaming up to build a fleet of flying taxis.

Uber, the ride-hailing giant, said its four-passenger "Uber Air Taxi" will initially be piloted, but over time will become autonomous. Uber says it wants to conduct flight demonstrations in 2020 and make such vehicles commercially available in 2023.

The company plans to launch the aircraft in Dallas, Los Angeles and Melbourne, Australia. The air taxis, which look like a cross between a helicopter and a small airplane, will be all-electric. 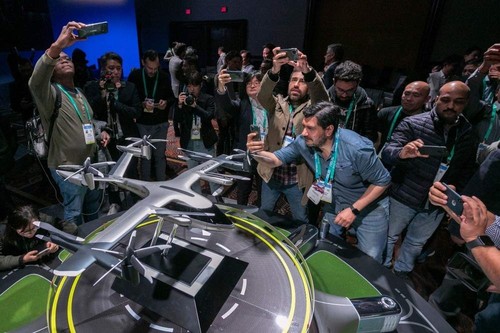 A model of the S-A1 electric vertical takeoff and landing (eVTOL) aircraft is shown at CES. (AFP Photo)

Sony says the Vision-S is just a concept and is its way to showcase the future of automotive technology.

The electric sedan is powered by a "newly designed EV platform" which Sony says could be used in various types of vehicles as well, including vans and SUVs.

The car combines Sony's expertise in sensors, imaging and entertainment. Equipped with Sony's 360 reality audio for an "immersive audio experience," the car has 33 sensors inside and outside of it. The sensing technology can detect threats on the road as well as occupants of the vehicle and recognize them, allowing users to control the entertainment systems via gestures. There is also an ultrawide panoramic screen across the dashboard displaying all your driving information. Two touchscreens on the back of the front seats make sure passengers also have access to the in-car entertainment systems.

Built by Sony's AI and robotics team, the vehicle is a prototype and although it has passed all road safety checks, there is currently no talk of plans to sell the car to the public.

The prototype was developed in cooperation with several companies, including Bosch, NVIDIA, Continental, Qualcomm, BlackBerry and Gentex. 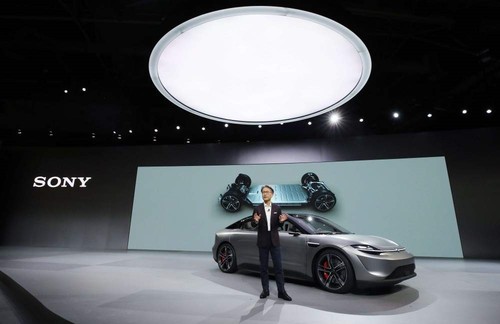 Meanwhile, Mercedes-Benz awed all with its latest concept car which showed how humans, machine and nature could merge.

Instead of a traditional steering wheel, the vehicle has biometric connection features, which enables the car to recognize the driver by heartbeat and breathing, bringing the whole interior to life. It also has no pedals as it is designed to be autonomous – theoretically.

From there, by just the lifting of a hand, the driver can choose between different functions, and by squeezing their hand shut off the car goes.

Ola Källenius, Daimler's Chairman and the head of Mercedes-Benz noted that this was a show car, however, saying: "show cars are here to spark our imagination, just like science fiction movies do."

Intel Corp on Monday released a video of its Mobileye autonomous car navigating the streets of Jerusalem for about 20 minutes with the help of 12 onboard cameras and, unusually, no other sensors.

The development comes as chipmakers and machine-vision system manufacturers compete to provide the brains and eyes of automated vehicles.

The chipmaker's demo is notable as self-driving car technology companies generally pair cameras with other sensors like radar or lidar to help the vehicle "see" its surroundings.

Mobileye also said it can merge the information from its camera-only system with that from radar and lidar systems to use together on self-driving cars. 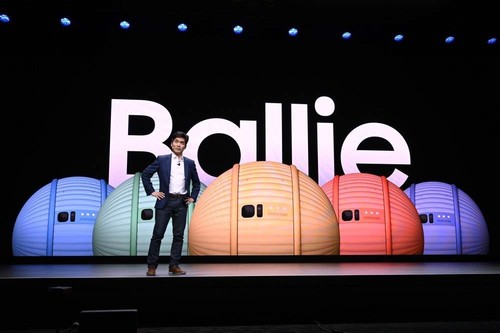 Sebastian Seung, executive vice president at Samsung Research, discusses Ballie, a small round companion robot that can react and interact with its owner. (AFP Photo)

A Samsung lab on Tuesday unveiled a digital avatar it described as an AI-powered "artificial human," claiming it is able to "converse and sympathize" like real people.

The technology allows for the creation of customized digital beings that can appear on displays or video games and could be designed to be "TV anchors, spokespeople, or movie actors" or even "companions and friends," according to the California-based unit of the South Korean giant.

"NEONs will be our friends, collaborators and companions, continually learning, evolving and forming memories from their interactions," said Pranav Mistry, chief executive of the lab.

The NEON creators said the new virtual humans are the product of advances in technologies including neural networks and computational reality.

While digital avatars have long been able to be programmed for specific tasks such as role players in games, NEON goes further by enabling interactions that can incorporate human emotion.

Although artificial humans may borrow features from real people, "each NEON has his or her own unique personality and can show new expressions, movements, and dialogs," the company said.

Samsung scored points with its rolling robot ball, named Ballie, which tracks its owner around the home.

The ankle-high robot was designed as a "life companion" and fits into the company's vision of "human-centered" artificial intelligence.

Sebastian Seung, the chief research scientist at Samsung Electronics, described the tiny robot as a fitness assistant and a mobile interface to help people in various situations.

"It's a remote control that helps seniors control all the smart devices in the home, and calls for help if they need it," he told a CES keynote.

LG said its smart televisions were being enhanced to give viewers real-time answers to questions about what is happening on screens – from sports to news to films, and even help them find and buy what a particular actor may be wearing.

Beginning this year, owners of LG's new webOS Smart TVs will be able to shop on-screen for things they spy on participating networks' shows, according to TheTake.

"Shoppable video has been talked about since the days of Rachel's sweater on 'Friends,'" said TheTake co-founder and chief executive Tyler Cooper.

Chinese consumer electronics giant TCL offered a glimpse at three new smartphones, one tailored for super-fast 5G networks, and promised all would come in at less than $500 at launch later this year.

TCL revealed it is working on a phone with a screen that folds like a book, and a visor headset that gives an experience like looking at a 110-inch television screen. Both of those were prototypes in development.