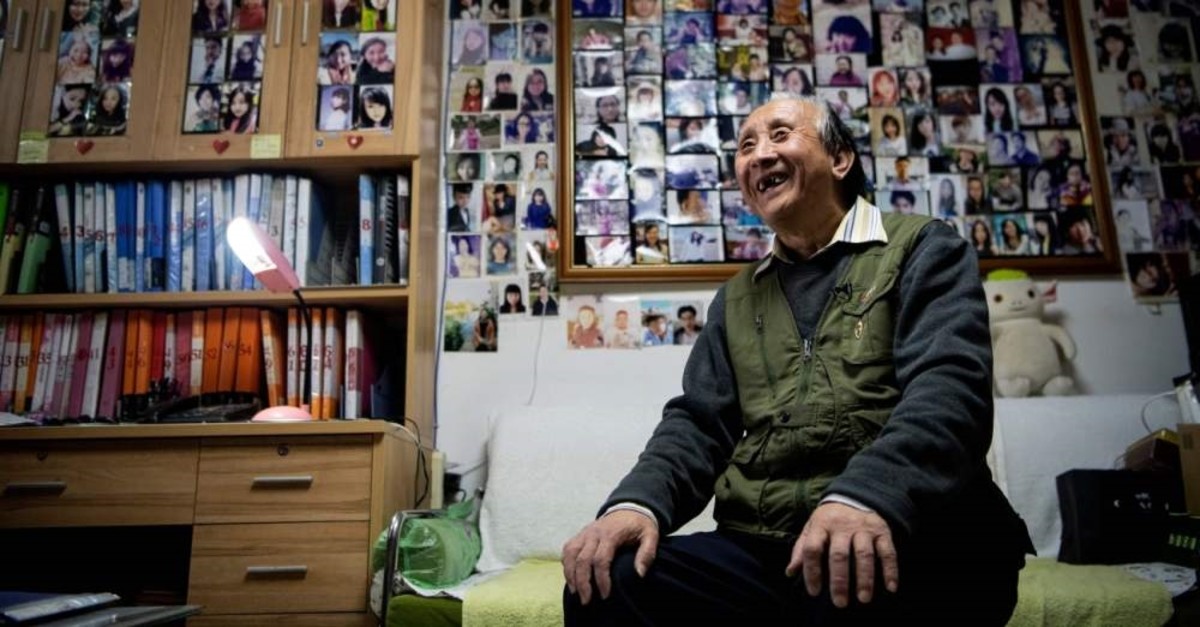 This photo taken on Dec. 17, 2019 shows matchmaker Zhu Fang smiling at his house with walls covered with images of single women who have come to him over the years in Beijing. (AFP Photo)
by French Press Agency - AFP Feb 13, 2020 1:15 pm

Zhu Fang's living room walls are plastered with hundreds of headshots of hopeful singles, some of them faded and featuring bouffant hairstyles and outmoded attire.

For almost 50 years, he has been one of Beijing's most popular matchmakers, and even now – aged 75 – he remains in as much demand as ever.

In his time uniting lonely hearts, China has undergone a dramatic social change. Marriage, which has traditionally been key in the patriarchal society, is in decline and the country's birth rate fell to its lowest level in 70 years in 2018. But Zhu insists people are still looking for love, and his phone rings often with matchmaking requests.

"It's meaningful, and that's why I've continued," he says, but concedes it is not a lucrative business, and he relies on the financial support of his children. Zhu says he's inspired by late Chairman Mao Zedong's political slogan, "Serve the People".

"When I help others to find happiness, I also get some happiness myself," Zhu says. He charges a one-off 200 yuan ($29) membership fee and his clients are mainly elderly people hoping to find spouses for their adult children.

On a cold December morning, his from-home "office" is full of middle-aged parents huddling around binders of printed dating profiles, searching for a suitable son- or daughter-in-law.

"We have our own house in Beijing, and she has money," Huang said. "Everything is going smoothly – except for the loneliness."

Zhu's matchmaking career has spanned decades of breakneck economic growth and social change in China. When he first started out, China had not yet opened its economy to the rest of the world and most of his clients were male factory workers. A few colleagues at his sandblasting factory in Beijing had approached Zhu to ask if he could introduce them to potential girlfriends. After a few successful matches, Zhu was hooked.

"I thought it was fun, so I kept going, and now 50 years have passed."

He used to arrange dates "in parks, or on the roads or at stations." Zhu himself was introduced to his wife by a neighbor, and they married in 1969.

"In the past, people fell in love at first sight," he says. "I didn't think that deeply about it. I thought that as long as I could find someone to pass the days with, it would be fine."

As China has changed, Zhu has also noticed a big change in his clientele. He says that in recent years his clients have become more status-conscious and are often embarrassed about using a matchmaker, saying: "Some (clients) work in industry, commercial offices or the tax bureau, and fear that others will say: "With such a good job, why do you need a matchmaker to help you find a boyfriend or girlfriend?"

In his time as a matchmaker, Zhu has brought more than 1,700 couples together, but he admits that he can't find a partner for everyone: "Some photos have been up for a long time".

There are far more women on Zhu's books now, but he says they have high standards. "They have three 'highs': they have to be highly educated, have high salaries, and have a high physical stature," he explains, adding they won't settle for anyone they deem unworthy.

"Single women say they would rather have no boyfriend than have someone who's not good enough," he explains, adding: "But no one is perfect. If you don't have the right attitude, you'll never find someone."

There's also a growing trend for intimacy on-demand, with some people opting for virtual boyfriends and girlfriends so they can still have companionship without the pressures and commitments of real-life dating. And while China does not allow single women to use sperm donors, a growing number of affluent older women are opting to find foreign sperm donors so they can start a family in their own time, and on their own terms.

Sandy To, a sociologist at the University of Hong Kong, said China's one-child policy – which was in force from 1979 to 2016 and limited the size of most families – had created "a generation of self-confident and resourceful women."

Dating apps and online agencies like Momo and Baihe have also taken off in China but Zhu believes his way is better.

"No matter how good the internet becomes, I still don't trust it," he says.

And his matchmaking club continues to attract clients hungry for face to face connection – of all ages.

One woman, a septuagenarian, calls frequently to complain he has not found a partner for her yet.

Joyce Gao, a finance professional in her early thirties and one of Zhu's clients said she hopes to find an "energetic" man with a "strong work ethic".

At a recent group dating event organized by Zhu, she was the only single who had come on her own, without her parents. Gao says she still prefers Zhu's old-fashioned meetups to online dating.

She says: "Offline, things are more real, and you can feel what someone is like."