'Walk For Peace' from London to Mecca: A British Muslim's story 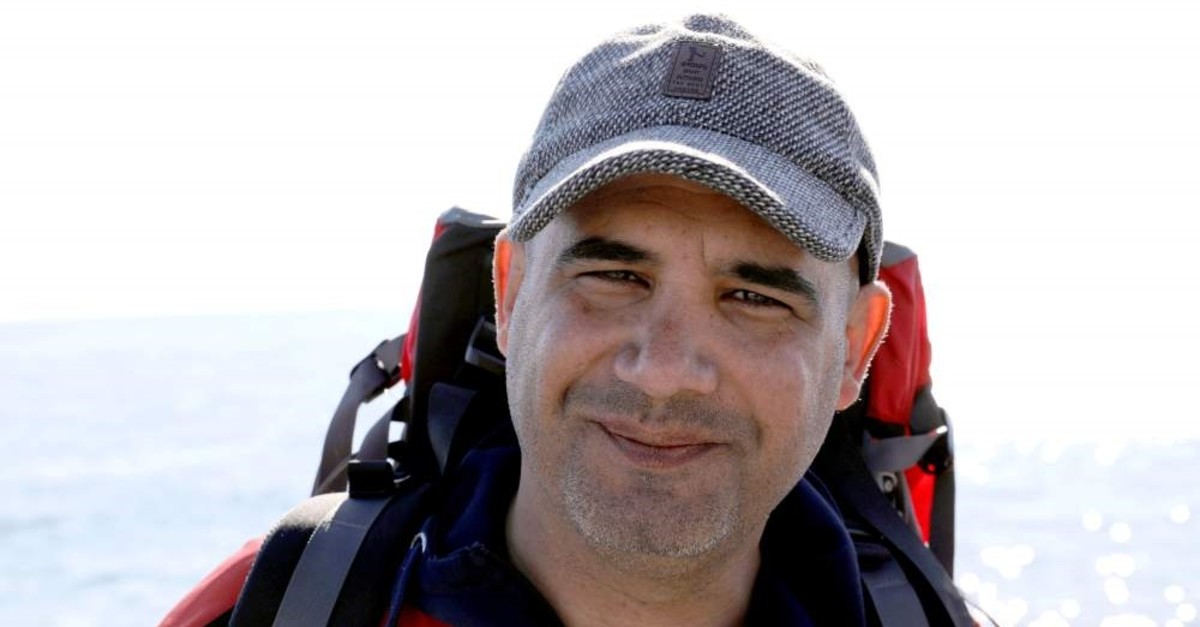 Farid Feyadi said he hopes his walk to Mecca will inspire people to be stronger and kinder. (AA Photo)
by Anadolu Agency Feb 23, 2020 2:12 pm

At a time when fear and new forms of extremism have blinded many to tolerance and peace, one man is attempting to prove to the world that Islam is indeed a religion of peace and that what we see in the media and across the world today are just cynical exploitations

In an attempt to put on full display to the world that Islam is indeed a religion of peace, British national Farid Feyadi, 40, has undertaken a journey of thousands of miles to reach Mecca from London – entirely on foot.

A Mancunian designer and inventor, Fayedi recounted his journey to Anadolu Agency while stopping off for some respite in Istanbul: "As a Muslim, I believe each of us is an ambassador of this religion. We have a big responsibility on our shoulders to represent Islam and Muslims in the best way to the world. I tried to do something in a very peaceful way to show Islam is a wave of peace that draws from the word 'Salaam' (the Arabic word for peace)," he said, decrying the "bad impression" of the religion and "horrible" deeds committed by the Daesh terrorist organization, supposedly in its name.

Though he initially wanted to make the pilgrimage via bicycle, he later decided to go on foot once he found out that others had made the journey in the same manner.

"I said if they can do it, why shouldn't I? So, I decided to do it by walking. When I told my friends, they didn't believe me," he recalled.

Making the pilgrimage to Mecca – a religious obligation for Muslims with sufficient means – on foot is an honor and blessing, he said. "I started this journey on Nov. 3, 2019. I have never experienced travel like this, I have traveled by plane; I have booked nice hotels, but never like this. I was so excited," he said.

Once he had made the five-day journey from London to the port of Dover, he took a ferry over to France. Boarding the ferry Fayedi said, he was "so excited because I couldn't believe I was doing it".

Feyadi said he had to change the trolley he was using to carry his essentials three times so far due to his lack of experience and had faced difficulties along the way.

"I've had so many dangerous encounters while camping in places far from cities. There were times I was scared, so then I decided to camp in city centers or places where there were people I could reach," he said.

So far, he has worn out four pairs of shoes and is now on his fifth and even takes medicines and vitamins every night to mollify the aching in his knees from every long day's journey.

Feyadi plans to arrive in the sacred city of the Kaaba, where millions of Muslims journey every year, in July, as the scorching summer heat takes hold of the region.

After Istanbul, near Turkey's northeasternmost corner, Feyadi marched on southeastward to the capital Ankara and was on his way to the central city of Konya and from there, down to Antalya on the Mediterranean coast.

From there, he will make the only non-foot segment of his journey, catching a flight to Jordan to avoid the ongoing violence in Syria and Iraq.

"I will continue my journey to Saudi Arabia from Jordan. Hopefully, I will arrive in July," he said.

One reason for his late arrival, he explains, will be the weather, as the rising temperatures will prevent him from walking at his usual pace. According to his calculations, he has budgeted his time well and is about three weeks ahead of schedule.

Aside from his message of peace, Feyadi also aims to inspire hope in cancer patients across the world.

"I'm a kidney cancer survivor; I live with one kidney. I'm doing this project, and I walk around 60 kilometers every day. All these blessings come from Allah. Without His help, I wouldn't have got this far. I've trudged through heavy rain, snow and freezing cold water," he said.

Feyadi said he wants to make more journeys in the future, this time with fellow travelers.

"I have a Muslim friend who has a Spanish background. Two years ago, he traveled from Paris to Mecca on foot. There is also a lovely Chinese friend of ours who grew up in Paris and converted to Islam. We are planning to do this walk to Mecca again – or by bicycle – we haven't decided yet," Feyadi said.

"But my idea is that I want to form a group of about 20 people from every background, country or ethnicity, almost cultivating a small ummah (community of believers)," he added.

Some who have heard about his plans have excitedly asked to join him in his next project. "As a Muslim, when I heard this, I felt proud," he said.

Feyadi said people from Bosnia, Albania and Turkey – where the most-commonly practiced religion is Islam – had been particularly pleasant to him.

"I didn't want to take a break except for Sarajevo because it has a special place in my heart. I consider it the capital of Muslims in Europe," he said.

Alas, his "proper rest" would have to wait for Istanbul, he said, where he took a break from the road for a few days.

"Turkey is magnificent historically. ... It's as if you are walking through history. It makes you feel proud," he said, expressing gratitude for the hospitality he has received in Turkey and Turkish communities elsewhere.

"Turkish history is part of Islamic history, our glory. We are proud of it," he added. "I tell people I came here from London on foot, and they say 'OK, good,' but when I say 'I'm going to Hajj on foot,' their reaction flips 180 degrees ... They hug me, they kiss me, they ask if I need anything. They at least invite me to drink tea or coffee. I'm just speechless," he said.

Feyadi said he wants to be an inspiration to future generations and deliver a message to the world.

"My achievement is delivering a message that Islam is peace; Muslims are peaceful people," he said. He said he hopes this would inspire the "young generation" to persevere in leaving their mark on the planet.

"I'm doing this and going to the holiest place in the world. I want to deliver a message to the world and also to Muslims: Whenever you receive an objection from ... the world, have a pure intention, pure heart. Open your heart to the world with peace and love," he said.

Feyadi said he is planning to write a book about his journey and hopes to open a photo gallery, too.