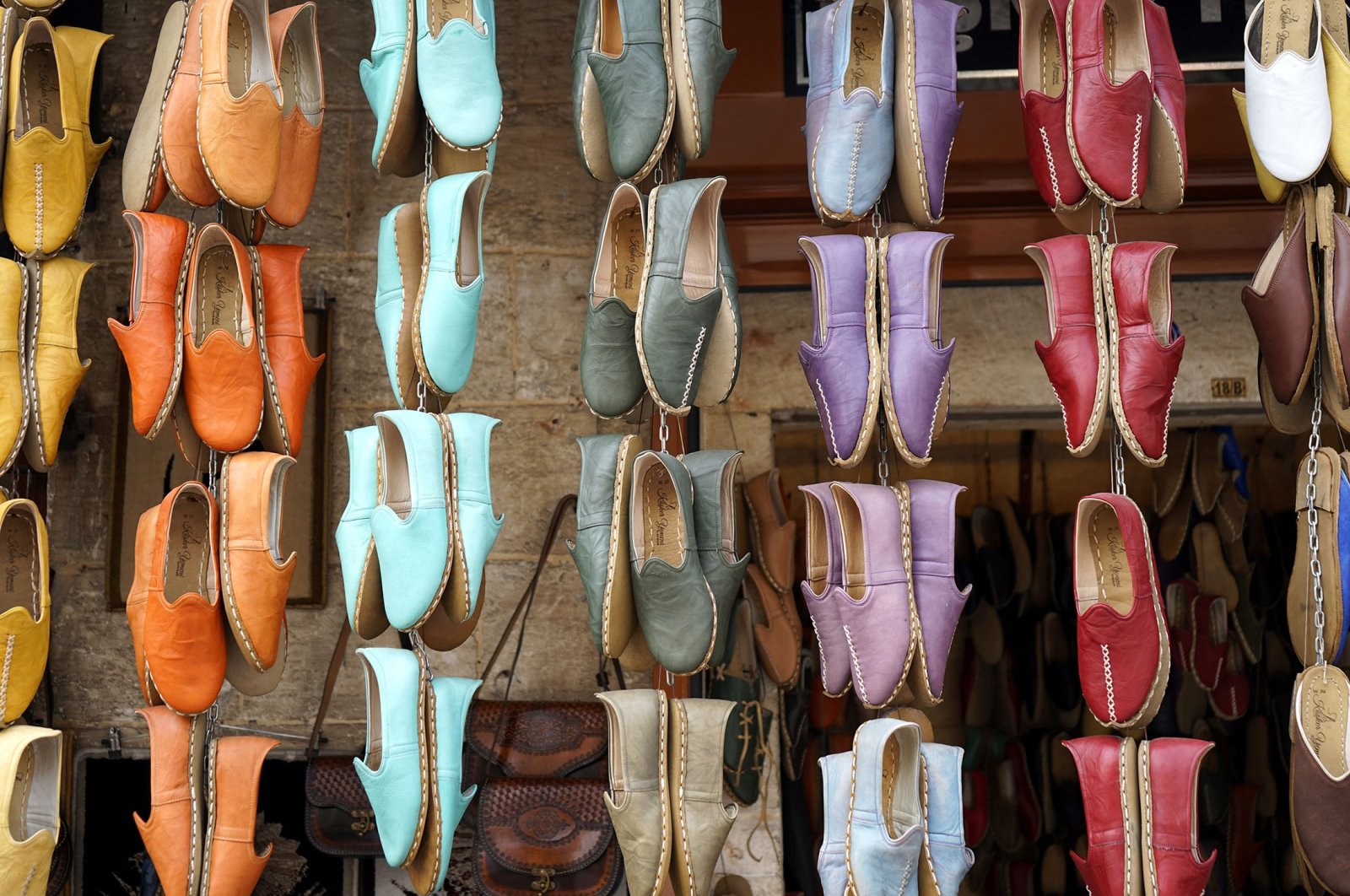 A certain style of traditional Turkish leather slip-on slippers, are both extremely stylish and comfortable, referred to as Gaziantep Yemeni Terlik. (Shutterstock Photo)
by Leyla Yvonne Ergil Jun 08, 2022 10:27 am

Sunday, June 19 is Father’s Day, which like many countries in the world is also celebrated in Turkey. Luckily there are a number of impressive gifts you can get for the fathers in your life that are quintessentially Turkish and will be cherished forever

With Father’s Day around the corner, why not source out one of the most authentically Turkish gifts you can find as a forever keepsake for the dads in your life? From large to small, funny to quirky, cutesy and just plain fierce, Turkey has a lot of traditional items that make for truly memorable gifts.

I stand by these words: The best gift you can get anyone in Turkey female or male is kolonya, which could be translated into English as cologne, but what I am specifically referring to is Turkish kolonya and its unique qualities. Not only is it customary to spruce oneself up with kolonya throughout the day, it is also offered to guests by being drizzled in their hands. Kolonya has a higher alcohol level and is used as a refresher, cleanser and relaxant and comes in all sorts of sizes and fragrances. The classic fragrances are lemon and lavender, but many landmark brands such as Rebul and Atelier Rebul have branched out into a variety of scents and gift sets, while Eyüp Sabri Tuncer even has an entire line of 13 different colognes capturing the essence of iconic destinations in Istanbul such as the Basilica Cistern, the Grand Bazaar and even the harem.

Any male who has had the fortunate experience of getting a shave done professionally at a local barber shop would definitely contest to it being one of the best experiences ever. A lot of that has to do with the specific brush, razor and shaving foam that Turkish barbers use. The brush is big and round with packed soft bristles and a bowl to place it in because it is dipped into a special foaming soap called Arko. It may sound crazy, but this Arko is a special kind of soap that was developed in 1957 and was the first of its kind released in the market in Turkey. To this day, 65 years late, Arko soap is still the go-to for any barbershop in Turkey. I’d venture to say it’s a must. Turkish shaving sets are sold online as “Nostaljik Tiraş Seti” and are also available from online shopping sites such as Çiçeksepeti.

There is a certain style of traditional Turkish leather slip-on slippers, which are both extremely stylish and comfortable and referred to as Gaziantep Yemeni Terlik. They are available widely online in Turkey and even in the United States as a young entrepreneur has started up a brand called Sabah. He sells stylish shoe versions of the leather slippers, which are created in Turkey and are now the “it” shoe in the U.S.

I bet you didn’t know that one of the best finds in the Grand Bazaar is antique pocket watches. Well, that was according to my father anyway. I do concur that a pocket watch, if you are willing to seek one out, makes for a timeless gift. You can find nearly century-old pocket watches in the heart of the Cevahir Bedestan, which is the oldest section of the Grand Bazaar and where the most unique old and antique gadgets and jewelry can be found. Don’t fret if you aren’t up for the whole bazaar adventure as these days, pocket watches, in Turkish “cep saati” are widely available from online retailers and once again even Çiçeksepeti has a remake of the classic pocket watches with a chain and all!

No one can argue that one of the most classic gifts from Turkey is a backgammon set. Not only do they come in all sorts of sizes and styles, but once you have played a game of “tavla” as they call it in Turkish, you can easily become hooked. The most widespread and favorite style for playing fast is the basic wooden variations, but if you want to get classy, there are beautiful smaller designed game sets with mother-of-pearl inlay and velvet lining. While backgammon sets are another popular Grand Bazaar purchase, they are also widely available online.

Like the sultans who reigned during the Ottoman Empire, you too can also have a dagger reminiscent of the era that is both usable if required and makes for quite the impressive display. Turkish daggers, referred to as “hançer,” are like mini-swords at around 30 to 40 centimeters (12 to 14 inches) in length and they come with decorative cases covered in mother of pearl inlay. Daggers are also one of those items you can source at the Grand Bazaar, but these days they can also be easily purchased online.

Reminiscent of sea foam, meerschaum is a rock-like mineral used to create pipes that have become a characteristic trademark of Turkey. While the Meerschaum pipe is actually one of the best as the stone itself is said to act as a filter, the pipes are mostly used for decorative purposes as many are carved into sculpture-like creations of mythological gods and other figures. Most of the Meerschaum pipes come from Eskişehir but any search of Lületaşı Piposu will get you results to shop for one online.

The cotton woven textile referred to as Şile, or Buldan Bezi, is used to make simple yet stylish summer shirts for men. These predominantly white shirts usually have subtle designs in light blue and pastel tones and a slit neckline. These shirts are airy and comfortable yet also quite complimentary and this makes for the perfect Father’s Day gift that could be their go-to clothing item to beat the summer heat. These shirts and other clothing styles as well as tablecloths and bedding in the fabric are easy to find in most farmers markets.