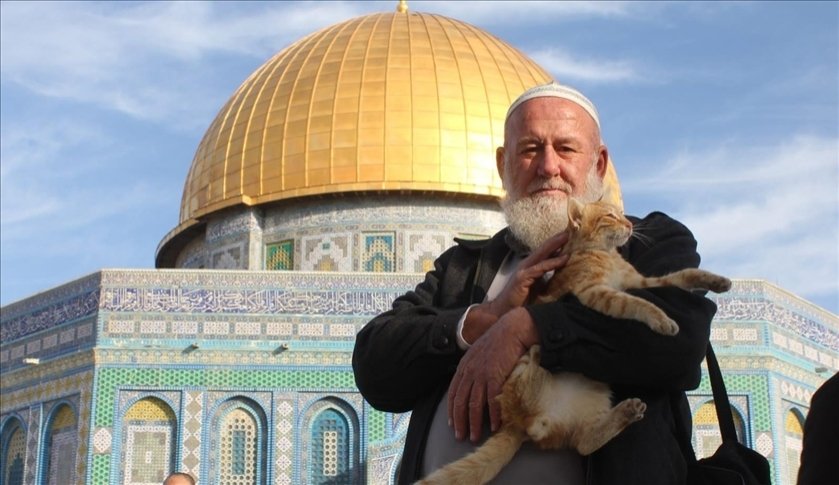 Ghassan Younes was cleaning the courtyards of the historic Al-Aqsa Mosque in Jerusalem during Ramadan in 2016 when photographer Saleh Zighari interviewed the devoted man after the dawn prayer. He then became famous for his daily compassion and care for animals, particularly cats.

Younes, 72, who was from the town of Ara, about 38.5 kilometers (24 miles) south of Haifa, had been going to the sacred mosque on daily basis from 1971 to 2020. He was well-known among Palestinians who visited the mosque due to his daily activities. He used to feed the birds and cats every morning after finishing his prayers.

"When entering the Al-Aqsa courtyards, I saw him surrounded by cats and birds. I had been seeing him since I was less than 8 years old," said Zighari, 23, a photographer from Jerusalem.

Younes' pockets were always filled with candy that he used to distribute among the worshipers at the mosque. "He was very kind to all people, a benevolent person who was kind to animals and people alike,” Zighari said.

The elderly Palestinian became well-known locally and regionally due to the videos recorded by visitors over the years at the mosque and circulated on social media.

"Many times while I was traveling between countries, and once people learned I was from Jerusalem, they asked about him, about his kindness and gifts. They thought he was an official, and they were always surprised that his caring for the animals was completely voluntary,” Zighari added.

The Israeli authorities detained Younes many times and on many occasions issued expulsion orders banning him from entering Al-Aqsa Mosque.

Hanady Halawni recalled that the last time she met Younes, he gave her some bracelets for her daughter on his last visit to Jerusalem. "He was loved by all people. He would always give me gifts for my sons and daughters. Even after my daughter turned 21, he still sent me gifts,” she said.

Halawni met Younes on a daily basis when she was a Quran teacher at Al-Aqsa Mosque before she was banned from entering it.

"When he was going back to his town, I met him several times at the bus station, which is near my house. He bought ice cream for everyone on the bus as a gift to them on their trip from Jerusalem to Haifa," she said.

Younes was infected with COVID-19 around three months ago. His health deteriorated and he died on Tuesday.